Why I had the best weekend ever! 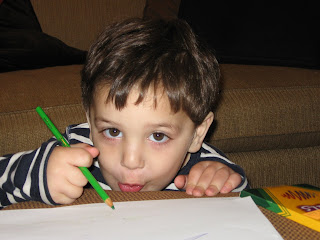 Isn’t he adorable?! I could go on and on about how wonderful he is, but I’ll just talk about the lessons I learned from him this weekend.

Jeremiah is 2 ½ years old and the 3rd child of my former boss at Harvard. After Juliette moved on from that position, I have become a part of her family and LOVE spending time with them. They are a true blessing in my life in so many, many ways. (another posting later on this…)

But, back to Jeremiah. His mom and dad, older brother and sister went to D.C. this weekend to be a part of a HUGE family/friend birthday party for both of their grandparents. The schedule and the accommodations would have been difficult for Jeremiah, so they sadly chose to leave him behind. However, I think he had fun!

Miah (as he refers to himself) LOVES to talk and laugh. He’s at that age where his speech is emerging and you can understand the majority of what he says, but he understands basically everything you say (if you keep it pretty simple). Being the youngest in a very active family, Miah loved the one on one attention he got this weekend (and so did I!) He got to choose what books to read, what toys to play with, what Sat. night movie to watch, what to eat for dessert, etc. Normally, he just goes along with the flow and tries to do the same thing as his older siblings even when he can’t because he’s too small or too young. But, that’s lesson #1

#1. Believe in the impossible. To Jeremiah, there’s no “I can’t” or “It won’t work out” or “That will never happen”. Everything is possible…. With a little help along the way.

Miah has a favorite game, where he’ll be really quiet in his crib and then when he sees you come in he’ll jump up with a huge smile on his face and a laugh. Lesson # 2 learned:

#2 Get out of bed each day excited about what the day will bring! Jeremiah has no idea really what will happen that day, but there’s nothing to say it’s not going to be a great day… so why not start off excited about it!

All three kids have some favorite games they play together. I think the top favorite is to run (basically around in circles). No, not tag… just run in circles. Their first floor in their home is basically one room right behind another and they’re large rooms. They start by the front door, run into the TV room, then into the living room, then into the dining room …. Circle around the dining room table and then back out another door down the long hallway that also leads to the front door…. And start all over again. Literally, they could do this for about 30 minutes straight until one collapses from exhaustion. But, the kids are PASSIONATE about this! Lesson #3 learned:

#3 Have passion! Kids in general tackle most activities with passion and reckless abandon. And, while you’re at it… why don’t we spend more time on things we’re passionate about. Instead adults tend to get stuck in unfulfilling lives and careers. We get STUCK. If kids get stuck… you can guarantee they’ll look for help to get out or get themselves out ASAP.

Jeremiah and I did a lot of things yesterday (like a play group, Chuck E Cheese, library, some shopping, some baking, etc.) One of the things I was baking required yellow peppers. Jeremiah watched in awe as I cut it and then was SO excited when I gave him a piece. Then, there was this new toy structure at the playgroup that captivated him for about 30 minutes. Then, we drove through a tunnel and he got SO excited and kept asking to drive back and go through it again. The list goes on and on…Lesson #4 learned:

#4 Get excited about the little things. Find wonder and appreciation in small things. Miah’s favorite word of the weekend was “Cool!” Everything, even the smallest thing that was new to him was COOL!

Miah is a good hugger and likes to give wet kisses as well, but he also loves to get the back. Even when he’s done something wrong and been told “no” or he’s crying because he doesn’t want to go to bed, he’ll stop crying, or pouting when you say “Can I give you a hug?” Or, “I love you!” And, then he’ll just look at you, smile and laugh, and then give you a big hug in return. Lesson #5:

#5: Love and express love no matter what mood you’re in. Life’s too short to be mad, hold grudges, or be unforgiving. Why waste the time and energy?

Yesterday, we went to Chuck E Cheese and I think everyone who lives in Everett had the same idea. It was SOOOO crowded. Jeremiah was over-stimulated and scared by all the people, but DID NOT want to leave. He just wanted me to walk right by his side to everything and be his companion. Sometimes he would walk a few steps ahead, but always turn back to make sure I was there. Lesson #6 learned:

#6: Depend on others and don’t go the road yourself. We’re all here for each other. Some can navigate the way a little easier than others because of their previous experience or age in life. It’s ok to depend on them for help/support until you are able to move on and take the lead yourself.

Well, many more lessons learned, but I won’t forget this weekend and the amount of fun, love and joy that filled my heart! Jeremiah reminded me what it means to LIVE and that is definitely something I had forgotten. I just need to somehow find ways to “escape adulthood” at times ☺ 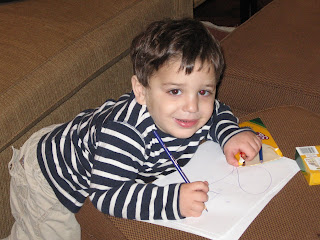 Jason of Kim and Jason said...

Cara, GREAT post. I was attracted to it because of your use of the phrase "escape adulthood" which just so happens to be the title of one of my books. In fact, some of the chapters in the book are right in line with some of the things you wrote about here (delighting in the little things, living with passion, and dreaming big.) There are so many things we can learn from kids, and I'm grateful to have people like you noticing those things and sharing them with others. I have a feeling you'd really like our web site (KimandJason.com), which encourages people to stress less and have more fun by being more childlike, so I invite you to check it out if you get a chance. Keep up the great work!

Boy, did I ever need to read those thoughts - as one very much wrapped up in adulthood! You're a gem - thanks for posting them!

I'm glad you had such a wonderful weekend - and pls give Miah a hug for me when you see him again!

You can just learn so much from kids! Their lives are just so simple so they don't get things all mixed up! I'm glad you had fun.

I loved this post. I am surrounded by the magic and wonder of childhood everyday but take it for granted and even find myself getting frustrated by it at times, so to read your thoughts and the lessons we can learn from these precious children, what a neat thing. Thanks Cara. I don't stop and enjoy things often enough - it seems like we are usually all about the getting it done and don't enjoy the doing enough.