This weekend I was SO lucky to be given my boss's season tickets to the game on Saturday! Not only did I get the 4 tickets, but I got his parking pass as well, which by the way just happens to be covered parking RIGHT NEXT to the stadium. We could not have gotten ANY closer!

The weather was beautiful for an afternoon at the ballpark. Beautiful! It was perfectly sunny, warm (80s) but not humid. I worked out in the morning and then got ready. We met at 11 AM b/c there was traffic, but that just added to the experience! I loved driving there and not having to take the metro, which I have always done in the past.

One of the others who came with us (Cortne) had been a guest of someone with similar tickets in the past. She knew all about the ADDED bonus of the Diamond Club! This is an exclusive private club just above our section of seats in the stadium. You show them your ticket to get in the door. Then, they give you a wrist band to wear so you can come and go.  AWESOME 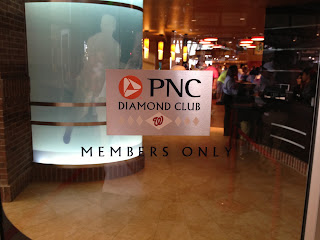 As soon as you enter they have a table with yummy candies. How can you go wrong with that? Then, there is a full bar with every kind of drink you can imagine to the right and rows of tables. In the back there were 6 or 7 of these stations with yummy food of all kinds! This picture doesn't do it justice, but who has salmon, steak, shrimp and other similar dishes when they go to a ballpark? Hah! Me - never. Until this past Saturday that is :) 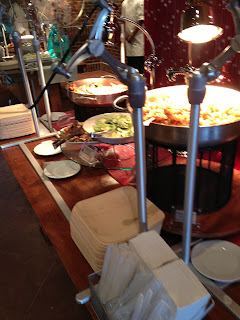 Even though the club was air conditioned, we took our plates to our seats. Why not? I've never been so close to the players! We were seated right behind their dugout. Like 4 rows back. CRAZY. he scary part was that you really couldn't look down when someone was up to bat because we didn't have the netting in front of us. It ended just about 5 feet before our seats! 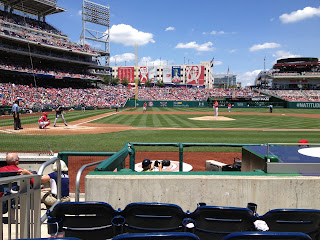 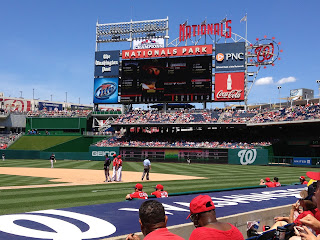 I love this panoramic picture a friend of mine took. It's amazing what you can do with camera's these days!

Screech, the Nationals mascot, came to visit our section. Everyone was getting pictures with him. I was a bit of a chicken at first.... 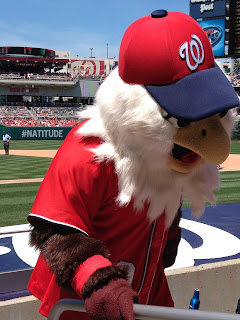 but then figured, why not?! This opportunity might never come again! I went up to ask him and he kept *Screeching* at me! I was confused at first and didn't know how to reply, but hah! That's all he can say. So Cortne and I got in it!
Here's our little group at the end of the game. The Nats lost like 7 to 0 or something crazy like that. It wasn't a very exciting game, but the food (unlimited visits), the trips I took just to cool off from the hot sun in the air-conditioned club every now and then, the weather, the people I was with, seeing Screech, standing and singing the National Anthem, watching them honor some of our troops while singing "Proud to be an American", and really - just being with this group of people... all combined to make it such a fabulous, fun, relaxing experience. I was so grateful for it and had such a GREAT time! 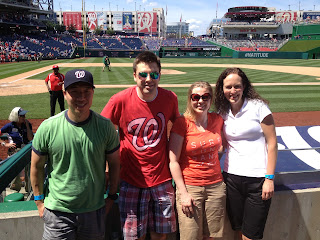 This was the sea of people heading to the metro after the game... we just took the elevator up from our seats to get to our car. 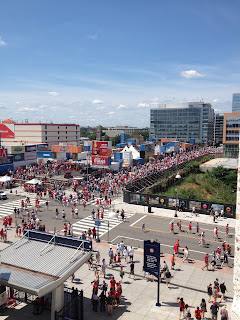 Now that's how you see a baseball game :)


I wonder if I can get these tickets for another game sometime soon!!!
Posted by Cara at 8:52 PM No comments:

All in just three days!

It's been an eventful month! Here's another posting of things I've been doing...
and this was all in a matter of three days!

Spring/summer has come and with that means some awesome thunderstorms.

I LOVE thunderstorms (as long as I am not out walking in it!). And, I happened upon this beautiful rainbow after a pretty big storm as I was driving home from work one day! 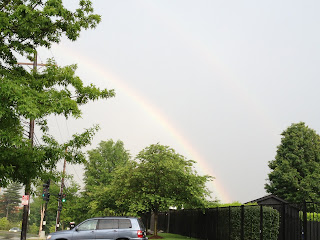 So pretty! I had to pull over and take a picture to remember it
I wonder where the pot of gold is though... :)

At the end of May, I went to PA for a day to finish clearing out the storage sheds we had used to stuff all the things from my mom's house that were still in there when it sold. We had cleared out most right after her funeral and had placed stuff in one bedroom that each of us (my brothers and I) had wanted to save. But, there was also quite a bit of *crap* that had just never made it to the trash. Well, when my little brother showed up at the house an hour before closing and noticed all the things still in there, he called a good friend and they loaded it all and stuffed it in two storage sheds in town. Months later I got the task of emptying out these sheds. It just so happened to be one of the most humid and hot days of the season thus far. And, lets just say the storage sheds had NO ventilation.

It was pretty bad. But, I was so fortunate to have a good friend offer to take the day off of work and drive with me. Thank goodness for angels like her! It was so nice to have someone there to help sort and chat with as well.

She happened upon a box of clothing my mom had saved from when we were kids. And... look at what I found! My kilt from NDA. Happy to say that it still fits! This must have been one I never wore though because I never had them this long! 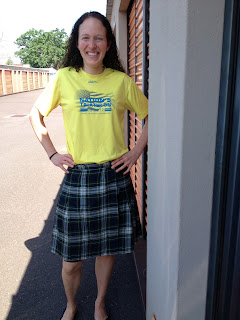 We cleaned out the sheds in time to also take a little detour and visit my mom's grave. They had recently put the stone in so I wanted to check it out. It had been such an ordeal to get it approved, etc., but I am pleased with the way it turned out. 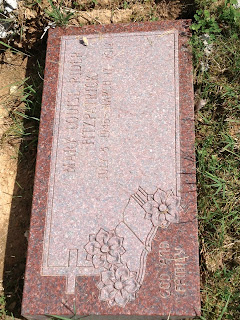 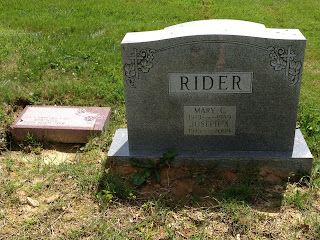 Cemeteries are interesting places. I think they have a lot of beauty and it's neat to think about the lives of all those buried there, but at the same time I think they're kind of morbid and don't like spending much time in one. We didn't stay for very long in this one :)

I wanted to move on what the day and get to our final destination - Annapolis!! We were going to spend the night in Annapolis in order to run a half marathon the following morning! My brother let us use his hotel points so we were able to get a suite in the Sheraton. Kate met us up there.

The Sheraton treated us well. We were privleged to get appetizers and dessert in the private club lounge and the rooms were very, very comfy. We went to dinner at Macaroni Grill and carb-loaded. I had a very yummy whole wheat pasta with a meat sauce and was filled!

Race morning came way way way too early! It was sunny - but hot and humid at 7 am when the race started! I told the others we had to take a "before" picture because I knew I wouldn't be looking decent at all after! 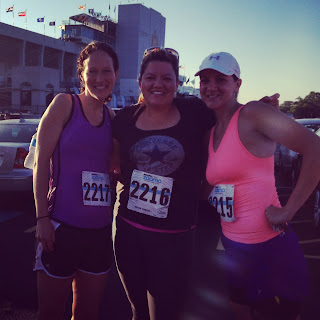 The course was beautiful. Much more hilly than I had been informed, but I did suprisingly well on it! The last two miles were truly hard since I had never trained more than 7 or 8 miles... but I was determined to finish and not to stop. I was all sweat. My music helped me a lot to keep going, as well as pouring water over my head at every station. But, I have no doubt the Lord helped me keep going as well :)

I loved that they had inspirational quotes along the way. Mile marker 12 was one from Pres. Hinckley, even though they spelled "weeks" instead of "weeds"! We passed this one three times. The 2nd time I really thought it was mile 12, but I was shocked and saddened when I found out it was only mile 1-.5 and we still have much more to go! 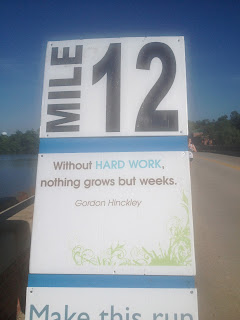 I crossed the finish line and was SUPER happy! I needed food, which I got right away, and then went back to the finish line to stretch and wait for Miriam and Kate. We were all VERY happy to be done with the race.... and as you can see, we were still smiling at the end! 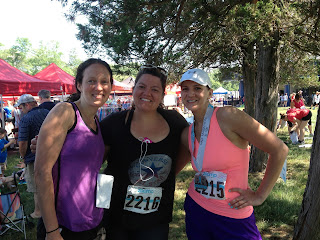 On the way out we had to stop and take a picture of the naval academy stadium sign with our "Yippee! I did it" poses :) 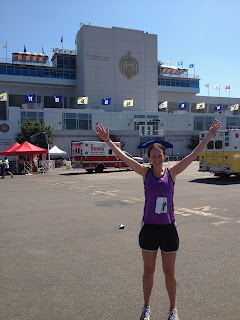 After the race it was off to the pool. So much fun!! But, I can wait a few months before doing it again :)
Posted by Cara at 10:22 PM No comments: