Yes, that's right. I have yet to be to a RED SOX game this summer, but I was at a Yankees game last week (mostly because I didn't pay for the ticket!)

If you're read my previous post you know that I was on the Cape with Papa Bob, Milly and the kids. Well, the family LOVES baseball and Charlotte and Lila live in NYC. Papa Bob is more of a Red Sox fan, but he wanted to take his grandkids to Yankee Stadium once before it was torn down.

So, we loaded up the two cars and traveled from Chatham, MA to NYC, NY all for ONE baseball game. My family and some friends thought I was crazy because I had the three kids with me on this five ours trip... but you know what? It was worth it!

Their family car is equipped with a DVD player, so that HELPED a LOT! We didn't hit any traffic until we got close to the GW bridge, but by that pt the kids were just excited to get to the game so they held out.

The kids had made "Go Yankee" signs our last night in Chatham and we were all set for the game. 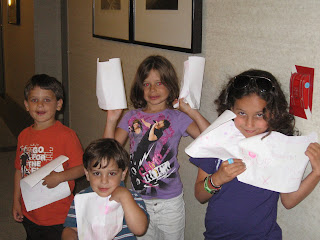 Our car dropped us off right at our gate, so it was perfect. We arrived just as the first pitch was being thrown. I don't know where good seats are in a stadium... we were pretty high up, but I was just glad to be there!! 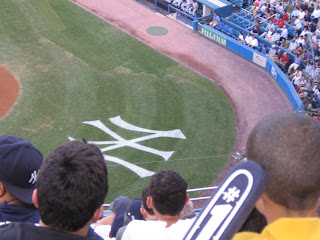 I just had to get a picture of THE most HATED sign in ALL of RED SOX Nation! 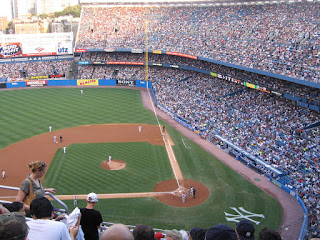 It was a beautiful night and I got my fill of a hot dog, pretzel and then some dippn' dots ice cream! YUM! The kids were very excited. And, honestly. I was too. There's just a thrill that comes from sitting in a baseball stadium with people you have fun with and laugh/joke around. Baseball is America's pastime and I just felt so peaceful and calm chillin' at the game.

In order to not betray the Red Sox even more I cheered for both the Yankees and the Angels. Not as loud as some of the folks around us... but I was definitely happy when the Angels won by quite a few! 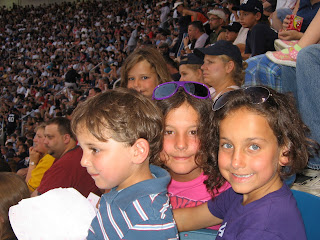 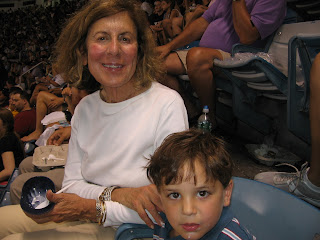 We got these cool baseball hat cup things with out ice cream. And, Jeremiah was such a trooper. This had been a VERY long and napless day for him. We didn't get home until 11 PM and he was awake the entire time!

We just ahd to stay until the 7th inning when they sing "Take me out to the Ball Game". This is Jeremiah's favorite song and he sings it OVER and OVER. Seriously, all week long, he would sing it not even realizing he was going to a ball game later in the week. His parents and others have sung it to him and he gets a reaction from people when he sings it... so he loves signing it. He knows ALL the words too. It's so DANG cute!

Seeing the look on his eyes when the entire stadium was singing his song was PRICELESS.

I was beyond exhausted when we got back to the room. I had laid out the kids pajamas and toothbrush. They were in bed within five minutes of arriving home and I was in bed within ten minutes. Sleep.... ahhhhh.

But, I was determined to wake up and run in Central Park in the morning. I didn't realize at that time how wonderful this run would be and it was a struggle to get up at 7 AM, but I forced myself because I wanted to say I DID it!! And, IT WAS THE BEST RUN EVER!!!

We were right in Lincoln Center so I was two blocks from the parks entrance on 67th street. It was a beautiful morning and there were lots of runners, bikers, walkers, what-ever's everywhere. I couldn't believe I was in NYC. Central Park is gorgeous... and beside the occassional smells every now and then, I wouldn't have believed it myself. I ran the 6 miles and felt like I could have run it again (which NEVER happens to me). It was so peaceful and calm... I'd go back and run it again any chance I got.

Well, I am also glad I went running that morning because the drive back was pretty much the next thing to DEATH by TORTURE that I could imagine. Traffic. Terrible traffic and the kids had had it. Done. They were short on sleep and patience. And, so was I. And, I don't do well sitting in traffic that's not moving either!

So, after a lovely morning, we packed up and left. It took us 3 (count that) THREE hours to get to New Haven. I think I could have walked faster! (And, told the kids they should test it and see. I challenged Leo to get out of the car and walk and see if he could make more progress... but he declined)

So, it was a rough ride back... but there was ONE cool part! I had told the kids about the carousel I used to ride when I was young (the one with the golden ring... see previous post) and since we were driving right by the exit, we got off.

My dad was so nice to drop us off in the little town b/c parking is a BEAST in the summer (and it was great to see my dad, even for only ten minutes!). We had lunch at my favorite ice cream place, rode the carousel a few times, and walked over to the Watch Hill Yacht Club to see the boats.

I love sharing a part of my childhood with them. And, they loved seeing and experiencing it as well. They kept asking me questions about what I loved most and what I would do during my summers there and I loved telling them! No one got the gold ring, but we all felt like we had memories to treasure as we headed back to Boston. 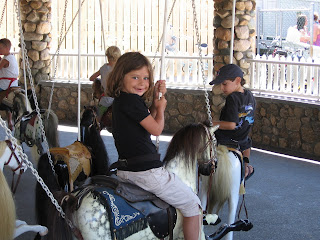 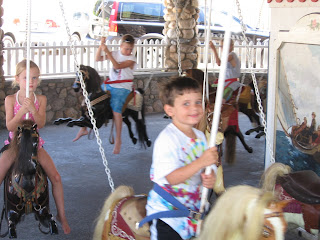 You did have quite the exciting week - from Cape Cod to NYC - talk about different environments!!! But how much fun you had! I'll bet your whole group was secretly very glad the Yankees lost - though it's kind of sad Yankee Stadium is being torn down.

What a great wrap-up to your summer - it's going to make going back to work very hum-drum! Mary Louise

Hi Cara!! Sarah told about your blog so I had to check it out. It looks like you having a lot of fun and staying busy. I haven't talked to you in forever but I would love to get back in touch. I just started a blog, it is themcquays.blogspot.com