Lots has been happening the past few weeks and no matter what anyone says, life is never dull! Mine has been very full with the school year coming to an end, finding out my school district is phasing out my position at Fox Hill and transferring me to Pine Glen (which I am very sad about), and packing up my apartment so I can sublease it while I move to DC for the summer!

It was in July of last year that I found out I might have the opportunity to move to DC and nanny for Juliette's family. Looking back, it's been quite a year for their family and now that I am actually here living their "new" life with them, it seems unreal to me as well! (brief history... both Juliette and David took pretty prestigious positions with Obama's new administration so they moved their family here in April. I couldn't leave Fox Hill with only two months left, so they found a nanny who only wanted to work through June... which was perfect timing for my arrival! And, here I am)

No matter how much you prepare and plan, a move is always stressful. I could NOT have done it without my mom's help. I left Boston my last day of school (my team of co-workers all treated me to lunch since the kids had a half day... and all the teachers had a surprise party for me before school to say "thanks" and "best wishes" as I had just found out a few days before that I was being forced to switch schools. I had very mixed emotions about this because I know deep inside I really am counting on finding a job in DC and moving permanently, but the fact that my "safety net" of Fox Hill was being yanked from me and completely unexpected... was a shock to my already stressed and sleep deprived system. However, I felt so LOVED and appreciated by my co-workers. I will treasure and cherish my memories of Fox Hill and the fantastic faculty and staff who taught me more than any graduate program could!

This move might have been even more difficult if things hadn't already been changing in Boston for me. 1. My church burned down and the building I have loved and worshipped in for the six years I've been there no longer exists; 2. my job was phased out at Fox Hill for budget reasons; 3. My grandfather's health is starting to fade rapidly and there is not much I can do to help him anymore besides pray for him; 4. many of my dear friends have moved within the past year from Boston or are going to move this summer; 5. Juliette's family had already moved... what else was I going to do with my summer without them!

So, here I am! My drive down here was miserable because of terrible rain storms. But, I spent two nights in PA and then off to DC! Juliette's family was away until Sunday night and I arrived on Saturday. It was hot and muggy when I got here which was a complete 180 from Boston where I had been wearing my fleece two days before!!

One week later I can say that this has been the change I NEEDED in my life! Such a blessing!! I love living with Juliette's family. I have a cute room in the furnished basement and my own bathroom. The house is gorgeous and in a perfect location in Georgetown.... right behind the university. I wish I had a video camera where I could show how green and gorgeous this city is! And, it is so family friendly. Crosswalks and sidewalks everywhere. Every little neighborhood has its own playground and tennis courts open to the public. Beautiful houses! Right by the water... maybe the Potomac river (I should know this). And, Juliette's house is RIGHT next door to a private pool and tennis club (which they are members of) so I have been every day this week! Oh - and did I mention that many museums, and things for the kids to do and see are free in DC! I learned that this week when I tried to pay for us to go to the National Zoo! LOVE DC!!! (Of course, this makes up for how expensive everything else is here... like food, etc. But, it is just simply beautiful. Every day this week was sunny and as I drive kids here and there I just look around and think how lucky I am to be here!

However, a side note: without my GPS I would NOT be able to get anywhere or find anything! And, my only complaint is the city's traffic patterns. It is the most bizarre system I have ever seem, but on some of the roads a lane of traffic might go one direction sometimes and the other direction at other times. MORE than once this week I have almost had a head on collision. I just don't get it!!

Here are some pictures of highlights from the week!
RED SOX v. NATIONALS!
Since I can't afford these tickets in Boston, I felt so fortunate to arrive in DC in time to go to a Red Sox game with Juliette's family! It was the perfect night. We were only about 16 rows from the ground and behind center field. The Nationals stadium has plenty of leg room in the seats and their food is INCREDIBLE! I had a nachos plate with all the fixings and corn bread (I don't like hot dogs at all). The weather was perfect and there were more Red Sox fans in the stadium than Nationals fans! LOVE THAT! 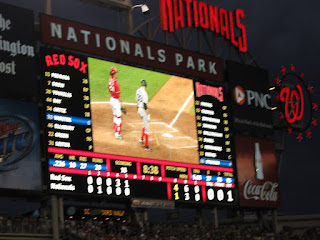 Proof that I was REALLY there :) 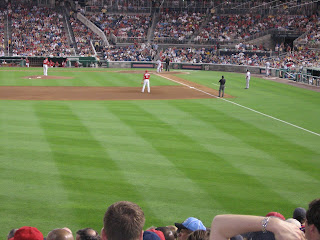 And close to the ground level!
David, Leo and Jeremiah (who hates having his picture taken!)

Cecilia was at a camp at the National Zoo all week so on Friday Jeremiah and I dropped her off and then walked around ourselves. (This is when I learned that many things in the area are FREE!) We saw the cutest animals. I wish I had better pictures, but this is one of the panda's. There was also a baby gorilla that was adorable! The National Zoo is a lot better than the zoo in Boston and many of the others I have been to. And, it's free! 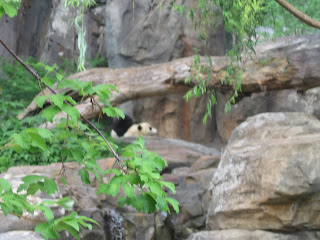 It was really hot and humid on the day we went so Jeremiah and I took lots of breaks! On one of them we took pictures of each other. This was my picture of him. He's so cute!! 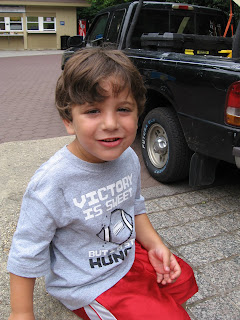 The zoo has a section that's called the "Kids Farm" where they have many farm animals that the kids can pet. Well, Jeremiah won't get near any animal but he loved the play area where there was a GIANT PIZZA! It was to teach the kids about healthy eating and growing vegetables. Here's Jeremiah on top of a large tomato! 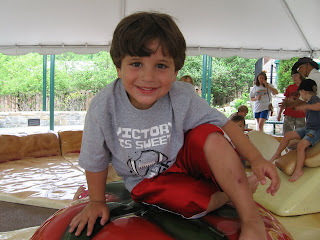 Here's Jeremiah's picture of me as we sat and rested. Not bad for a three year old! 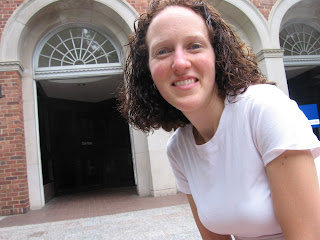 Later in the day, Leo had a birthday party at a bowling ally. It was quite dramatic as I arrived at the location only to see that it was located on a military base right over the river in VA. To enter you have to have your car searched and show them your license. Well, to my BIG surprise I could not find my license anywhere. So here I am, blocking traffic, with two kids in the back expecting to go to a birthday party... and we are not going to be allowed in! I was also panicked about where my license was!! I made some frantic phone calls to anyone who I thought might also be at the party so they could come and at least pick up Leo at the gate and take him in. Fortunately, the birthday boy's mom was still on her way because someone had stepped on the cake and she had to go get another one! She met us at the gate and took Leo. Jeremiah was not a happy camper, but we returned home. TO MY GREAT relief, I quickly found my license in a different purse that I had thought I double-checked to make sure I had emptied it... and we began our return trip to the base. Everyone recognized us at the gate and it was a little embarrassing, but we got in! So, Jeremiah and I went bowling while we waited for Leo. Jeremiah got 54 points!! 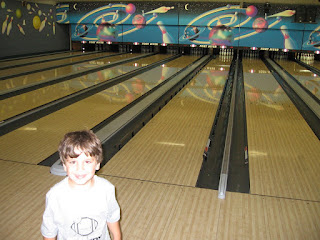 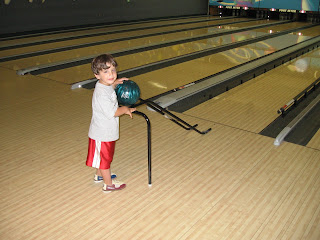 Look at this cool contraption they have for kids. It rolls off and therefore they don't need to throw it very hard. It also goes straight! Jeremiah thought this was the coolest thing ever... to knock down pins over and over again!
Posted by Cara at 4:27 PM