Life has been busy, BUT FUN! I haven't posted much about what I've been up to this summer... but here it is in a snapshot.
While I feel, at times, that all I've done this summer is:
1. Look for a job
2. Look for housing
3. Prepare AND actually, eventually, move my stuff from Boston in a trip (and a truck) I'd like not to remember
and 4. Look for a job
I can't deny the fact that I have had THE BEST TIME playing with these kids!! (pictures below)
Every day is a new day. New advantures await. I had so much fun doing research online and finding out new places to go and visit. We discovered we had some favorites we went to more than once... but we kept exploring because the world (or this immediate area) was ours to discover. I wish I had taken more pictures, but here are some of the highlights.
Since Juliette and David have connections EVERYWHERE, they were able to get special passes for us to have a private guided tour of the WEST WING of this beautiful house!
I have always wanted to get a tour of the East Wing... never dreamed of the West Wing!
It was awesome.
Juliette's parents were in town as well as two cousins. So, on Sunday morning we all went into the city and waited outside one of the gate's for our two guides who actually work in the White House to greet us. We had to get security clearance beforehand and dress in Sunday clothes.  It was a hot and humid day... waiting outside, but so worth it!

Ok - a picture I took off the White House website... but it was a lot better than the one I took of the outside!

We were not allowed to take any pictures inside. We got to see the Oval Office, go out into the back courtyard where the Rose Garden is, and just travel all throughout all the special "important people" rooms. We even saw where they go to have lunch! One of the things I learned is that they change the artwork every couple of months in all the hallways. They'll update the walls with recent pictures (HUGE) of President Obama and people who he's met or where he has traveled.... or any big events that occurred.  If I were him I don't think I would like walking through these halls... because literally you'd be looking at almost a life-sized picture of you every where you turn. He's probably used to it by now but I don't think I would like it!!
Anyway, after the main tour of the white house, we were allowed to take pictures in the back... here are some of them. 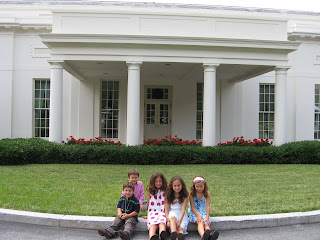 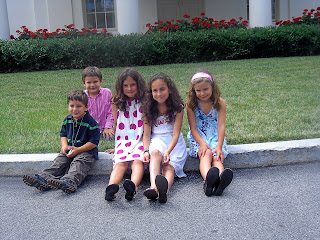 The kids... this door leads into his first secretary's waiting room (the gate-keeper) for anyone meeting with him. 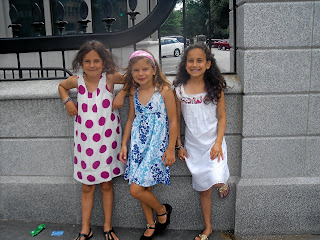 The girls waiting outside before we were allowed in 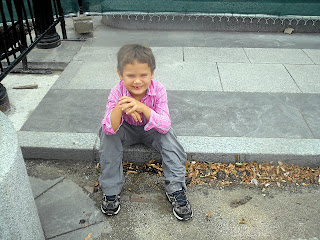 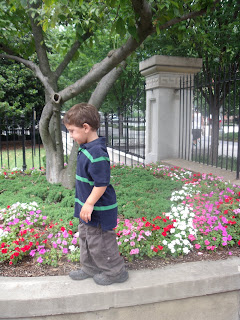 Jeremiah entertains himself... literally wherever we go! 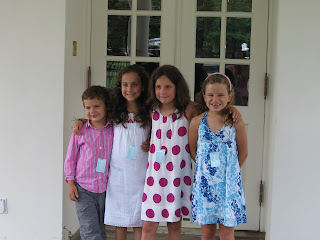 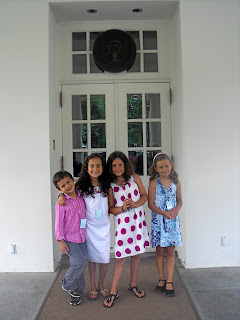 At the back door... again. I think we were here for about 30 minutes taking pictures! 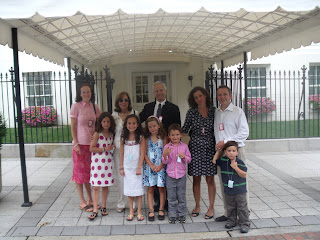 Before entering the White House 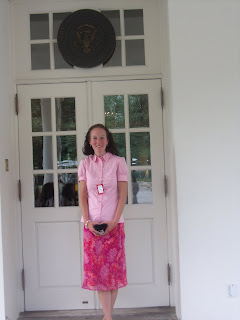 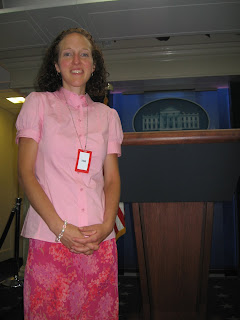 So, after we left the main building, we were able to go into the Press Room which is attached to the White House, I think... but has a separate entrance. I've seen this room many times on TV before, but I was SHOCKED at how tiny the room actually is. It always looks so big on TV, but it's not.  We got to take lots of pictures and rest in here as well... and cool off. It REALLY was HOT outside. 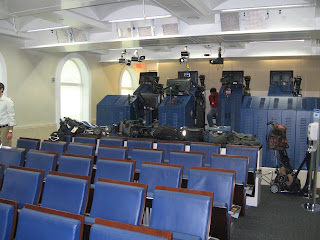 See how small the room is. I am standing at the front of the room. 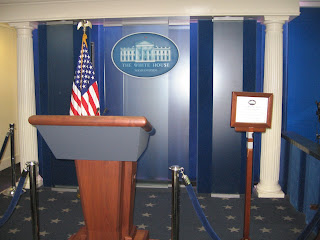 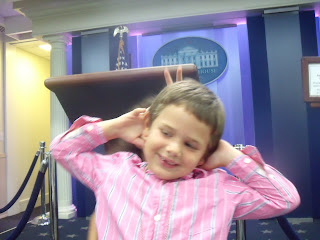 The kids were getting a bit restless... so we took some funny pictures 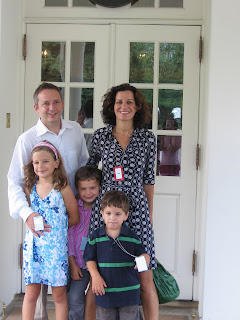 Juliette, David and the kids! 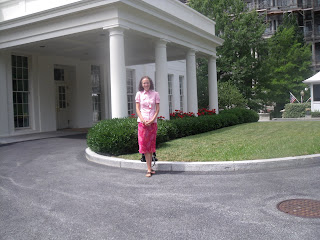 So, the next highlight of the summer was the annual summer trip with their two counsins and grandparents. I've gone the past two summers with them to Chattam on the Cape, but this year they went to the Chesapeake Bay because Juliette's family had moved. I only went for two days this year, but it's always a SPECIAL treat for me as well!! Living the life of luxury and resting and relaxing!! We didn't go in the water here because of the jellyfish and the weather was SO humid... but other than that, it was perfect! 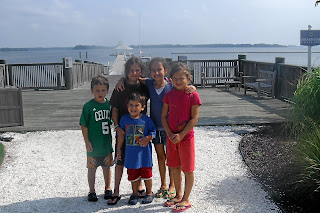 I didn't take too many other pictures of places we've been this summer. We've explored parks, water parks, indoor play gyms, the zoo, museams, ... you name it, we went there! The month before I came here I went online and found out about all the places to take kids in the Washington DC area. It was GREAT!  (If any of you are coming to DC and have kids... let me know and I can give you all the info you need on how to keep them happy and entertained!!)
But, we had some down time at home as well... here's Jeremiah. I caught him one day with this on... just playing around! 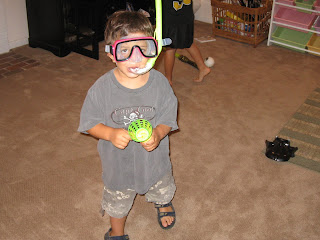 This little boy is ADORABLE. He'll talk your ear off if you let him and he's got a story and a wild explanation for everything as he tries to put his little world together! He's always running to wherever he's going and can entertain himself for HOURS with trucks, trains and toys. He is such a good little boy!! Getting him potty trained this summer was an adventure... and we haven't totally conquered it yet... but we're working on it!
One of the best museams we went to was the NEW Air and Space museam by the Dulles Airport. This place is GIGANTIC and very cool! We saw planes taking off and landing at Dulles from their skyview observation deck.  You could see for miles! Inside they have over 100 or more REAL planes, from small to large, and you tour the evolution of humans being able to fly in the air (with a machine, of course)! I didn't think I would love this museam as much as the boys did... but I REALLY did. I also took them to their first IMAX movie on the story of the "Blue Angels". If you've never seen them fly or know much about them... go to this website: http://www.blueangels.navy.mil/index.htm
Seeing them in IMAX was like we were fling with them! I got a little dizzy as we kept rolling with the plane! I never knew how intense their training was!
Anyway - here's a picture of the boys outside 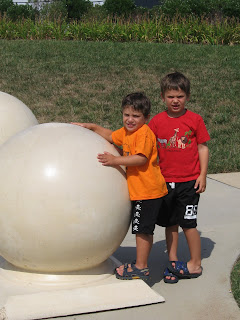 This is there skyview observation tower. We went up there!!! 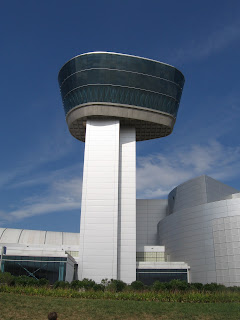 As I mentioned above... we went to many waterparks and pools over the summer but I think our favorute was Upton Regional Park in Arlington VA. Waterslides and all... we also loved it that it had batting cages and mini-golf too! 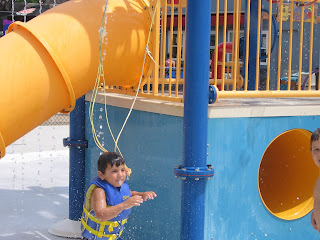 Jeremiah is EXTREMELY afraid of getting water dumped on him or even putting his head under water! He's a work in progress, but last week he did get his hair a little wet as he ran under the water spout. This was a BIG step for him! He can play in the water all day long... just as long as you don't try and get him to put his head UNDER the water! 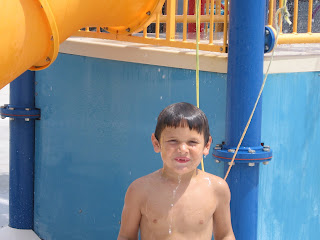 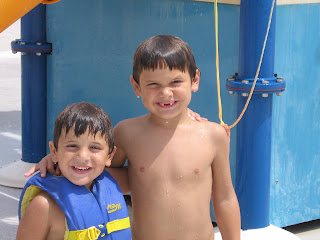 These two boys are incredible. SO much fun and so loving. What a true joy it is to spend time with them (most of the time :)
And, finally, I celebrated my birthday in August. Nothing too special... spent the day with the boys at the park, pool, and then a bike ride. Later on in the evening though, I decided it was time to treat myself to my first pedicure! Being a runner, my feet were in desperate need. I don't think the lady who did it realized how bad they were when she said the pedicure would only take about 15 min. I sat in that chair for 35-40!! But, look... cute feet! 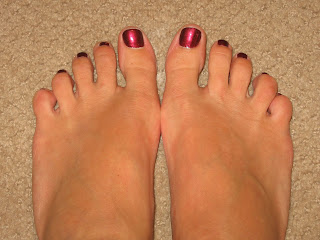