As one of my friends put it so nicely, this Thanksgiving was a "Friendsgiving" and it was absolutely wonderful!

Martha Stewart would have been impressed and I think that was their goal :) These 3 fabulous and talented women got together to host a Thanksgiving dinner this year... and let nothing that might seem "over the top" get in their way! Nothing was left behind! They could host the next show for Martha. Aprons and all. 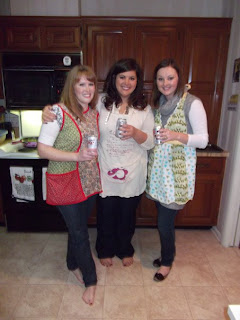 Sleep-deprived and still all smiles
Melissa, Chelsea and Michele

A little background on how I ended up here...

Originally, my mom, brother and sister-in-law were going to get together for a family dinner. A month before the big day, it ended up being best for my mom to fly out to Colorado to spend some time with her grandchildren while their mom had to travel for work for most of November. So, then we were down to just the three of us...

But, about a week before the big day, my brother calls to ask how much I would hate him if he went out of town with my sister-in-law for Thanksgiving! I had to laugh at how he approached it, but of course I said it was OK with me. Thanksgiving, ever since I left for BYU, has been more of a "Friendsgiving" than a Family Thanksgiving. Now, if this had been Christmas and they deserted me, I would have not been OK with it, but Thanksgiving is OK. Christmas seems more family-centered in my opinion, and besides, all of my friends would have been home with their families so I wouldn't have had a place to go anyway!

Well, here is a picture of the impressive set-up. We had "chargers"! (Yep... didn't even know what those were until I asked on Thanksgiving! And, for those who don't know, they are the largest plate beneath all the others in a table setting). We had butter cut out in fall shapes, a printed menu at each spot, a placecard in the shape of a boat (to symbolize the pilgrims!), candles, scented pinecones and other such decorations, wine glasses (for the Martinelli's!!), etc. You think of it... we had it! I was so impressed! Now mom... don't be offended... but this was probably the nicest Thanksgiving table set-up that I've ever been to! 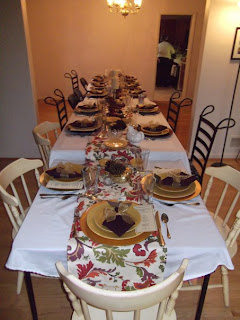 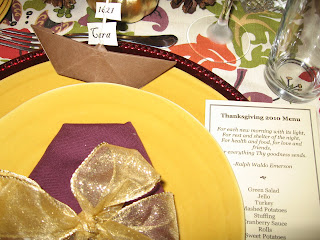 The food was incredible, the company was fun (there were about 15 of us), and it made me realize how much I feel like DC is now my "home". I feel comfortable here. I never felt this in my 6 years in Boston despite the many blessings I received when I was there. I met some incredible people, had wonderful friends and roommates, and opportunities abound... but it just never felt like "home" or where I belonged.

I am so grateful for the friends I have here, the jobs I've had and have, and for living in such an area that's richly blessed with diversity, history and opportunity.

Thanksgiving day here in DC was overcast and a bit chilly, but warmth and merriment abounded with flowers as pretty as these and smiles and beautiful as Melissa's! 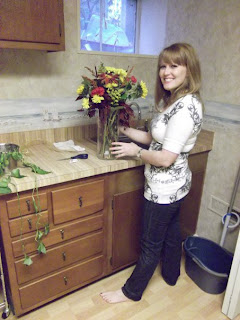 Cara! I'm so thankful for you.
I never sent you a thank you for the beautiful card you sent me in the mail a few months ago. It made my whole week and was so thoughtful of you. Thanks! I hope you're having a good week. Whenever you get bored and feel like comin' out west again... you know you have 2 AZ friends (probably more) waiting to party! I hope you are enjoying the season! You are one of the most giving and genuine people I know.