A visit to our Nation's Capitol Building!

Last Saturday I had the opportunity to take a tour of the U.S. Capitol building with a group of women from my church congregation. One of them is the niece of Senator Bob Bennet (R, UT) and he had agreed to take us on a tour. 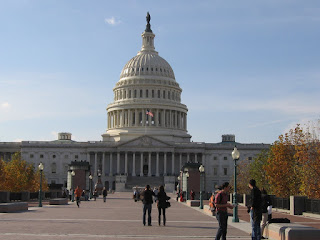 I was also lucky to be accompanied by a male! Yes. The only male. But, I should mention that he is about 9 inches tall and is flat. Yes, flat.

Have you ever heard of Flat Stanley? You can read more about him here but long story short, he was flattened by a bulletin board falling on him and decides to take advantage of his flattened state... by sliding under doors, etc. Well, he can also go through the mail, so my friend's daughters class sent him all over the country/world this year to see what knew experiences he could have. They asked his hosts to take pictures with him and send them back with some additional information about their town. What better place to take him in DC than the U.S. Capitol! 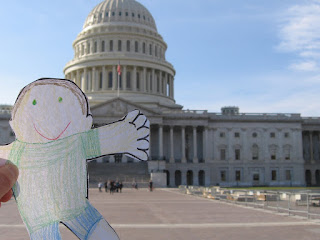 And, here he is.
He was very polite and well-behaved
the entire time!

This is another cool picture of the Capitol and the Washington Monument I found online and wanted to post. 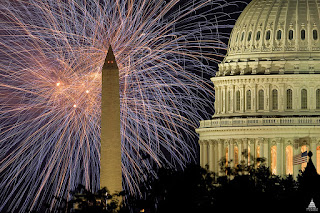 Well, more women showed up than expected (over 80 of us!), so we had to split into two groups. But, before we split, Senator Bennet shared with us some of his favorite memories of working in that building. His is retiring from government service at the end of this term (in January), so it was really neat to hear from him because he has served in government for so long! He shared stories such as... remembering exactly where he was on the Senate side of the building when he found out that President Kennedy has been shot. He also had the privilege of escorting President Bush and Cheney out of the Capitol building in front of 4 million watching viewers during the inauguration of President Obama.

Here are some of the cool things I learned and saw:

The Rotunda: It is a circular space that serves as a gallery of paintings and sculpture of American historical figures and events. 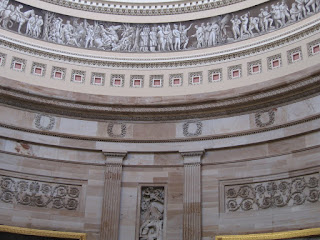 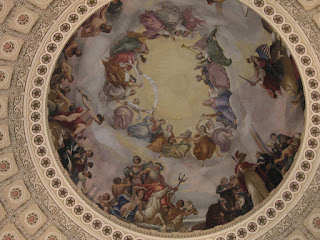 The apotheses. The very top of the ceiling.
Everything painted has meaning.
Learn more about it here. 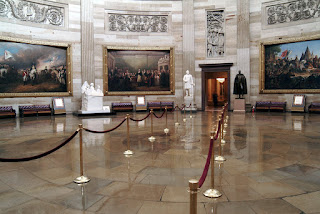 The Senate and House literally split the rotunda right down the middle. Both have control over who lies there for viewing after their death and I thought it was really cool that they lean the casket to one side if a member of senate/house! 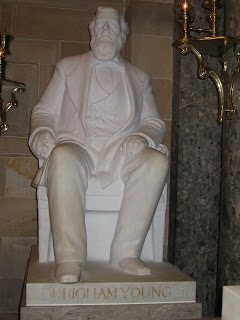 The concept of a National Statuary Hall originated in the middle 19th century, even before the completion of the present House wing in 1857. At that time, the House of Representatives moved into its new larger chamber and the old vacant chamber became a thoroughfare between the Rotunda and the House wing.

It was decided that all the States would provide and furnish two statues, in marble or bronze, of deceased persons who were citizens thereof, and historically renown or distinguished for their civic or military services

All state statues were placed in National Statuary Hall. However, the aesthetic appearance of the Hall began to suffer from overcrowding after 65 statues were put in there… so then they decided to spread them out in other areas of the Capitol. 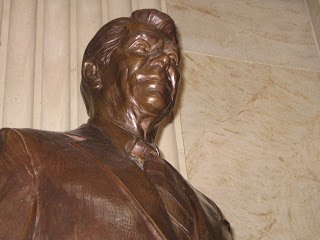 I was born the year Ronald Regan started his presidency and I have always admired him even though I didn't know much about what he did while he was serving his two terms! I saw this statue and I had to take a picture. But then, our tour guide told us his statue was unique in that a layer on the bottom contained some of the pieces of the Berlin Wall because he played a significant role in that coming down. If you look closely in the picture, you can see the change in color near the top. It was also neat to say that I touched part of the Berlin Wall on this trip! 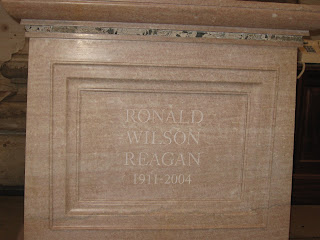 We also saw the Old Supreme Court room which is located in the Capitol. It was used from 1810-1860 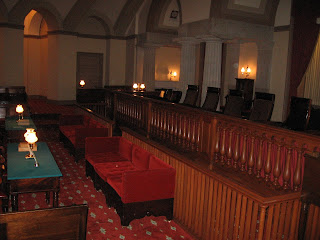 Finally, this is a picture of the room where Congress meets
although, I didn't take this picture! 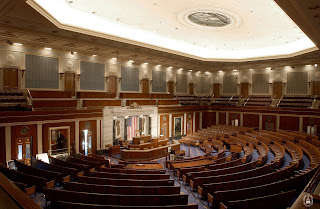 Some other cool, cool facts I learned about the Capitol Building!

1. Construction began in 1793 and the original building was finished in 1826, but it was being used long before that. The first Congress met on November 17, 1800

2. No building in DC can be more than 13 stories high! There is a law stating this because they want to be able to always have a view of the Capitol and the Washington monument. The top of the U.S. Capitol is 209 feet lower than the Washington Monument.

3. No one is buried in the Capitol, but there was a tomb area created for George Washington's body! However, after reviewing his will they knew his expressed wish was to be buried at Mount Vernon. So much for all that work to create the tomb. Lesson learned to check things first!

It was awesome to have this opportunity! I am so glad to live so close to our nation's capital! Flat Stanley enjoyed it as well and is now on his way back to some 2nd graders in Arizona with pictures from his visit!
Posted by Cara at 9:43 AM

Thank you for taking Flat Stanley. Hopefully, he wasn't too much bother and was quiet during your tour :) Sydney will be so excited.