An insiders view by a true "What"!

This morning I had the amazing opportunity to get an "insiders" tour of Georgetown University from a true Hoya! (Which we learned means "What" in Greek, so they added the Latin word "Saxa" meaning "Rocks" - So they're technically the "Hoya Saxas" meaning "What Rocks"... but if you just call someone a Hoya, you're really just saying they're a "What". Ha ha ha :)


My dad did his undergraduate work here, so he brought us to visit one time when I was about ten or eleven, but I don't really remember much of our visit... and since its almost been 20 years since then... a LOT has changed!


Anyway, before starting out on our tour, we also learned they have "Jack" the bulldog and another littler bulldog called "Little Jack." Very fitting.


It was a BEAUTIFUL day.

It was nice to just be outside walking around, but it was fun to walk in and out of such modern/beautiful buildings, and buildings that were some of the originals (I assume). I quickly realized that Georgetown has made very good use of its space and have built most of their buildings going up. Yes, this sounds silly, because most buildings usually are built up, but Georgetown sits on a hill so it's hard to tell from the outside that this is what is happening. However, when you walk in the buildings and then back out on another side, it's easier to see.

I was just really impressed with the campus overall. Some of the buildings had beautiful views where you could see across the river to Rosslyn, and they are building a new grassy knoll that looks like it will have a nice decline to it so you can roll down it or go sledding! But, overall, just a beautiful campus. They have a very old cemetery and a cool bell/clock tower that seemed to be constantly ringing. During the tour I learned that the hands on one side of the clock were taken in a prank a few weeks ago. It supposedly took the students 15 hours to accomplish it, and from the looks of it, probably took their life in their hands getting the hands off of the clock.

I love that Georgetown has kept it's strong Jesuit traditions/beliefs and that they still offer their students mass everyday. I also loved how beautiful their grounds were kept and how clean the campus was!

Anyway, here are some pictures.... This is the Bell/Clock Tower 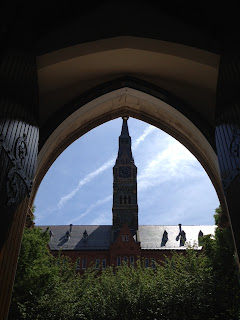 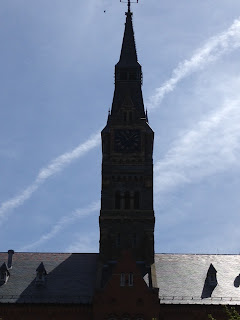 Then, one of the rooms we went in was Gaston Hall. It's inside the main building, Healy Hall. It seats over 700 people and it's where national and international dignitaries have spoken since the turn of the last century. Luckily for us the room was open because I imagine it's closed and locked to visitors most of the time.  The picture below is the front of the room where the speaker would stand. I took this picture from the 2nd floor. 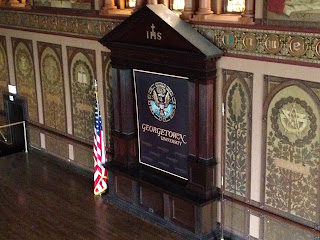 We had to get a picture of our official "Hoya" tour guide... as proof he actually attends the school! Doesn't the setting just look so prestigious! 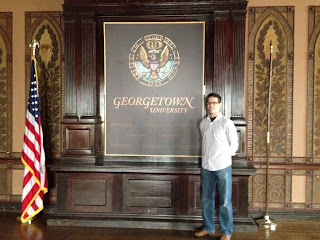 And, to the left of the above picture there was a Steinway piano (which is a pretty notable piano in the music world)... so Braden took the opportunity to play a little something for us on it! 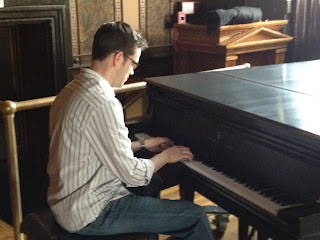 Mer... just chill in in one of the seats! 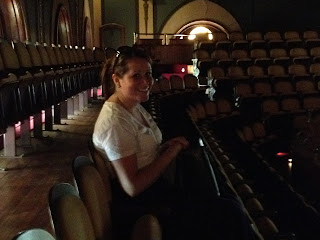 Mer was determined to find the one fountain on campus. It's well hidden if you don't know the school, but we happened upon it and she was very excited! I am glad we found this little quad as well. It was very peaceful and quiet. One of the smaller chapels on campus was on the other side of it and it was just a beautiful area. We stopped and took pictures :) 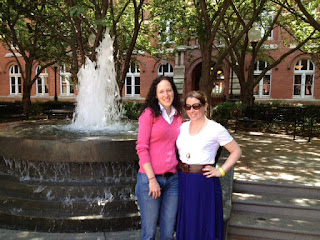 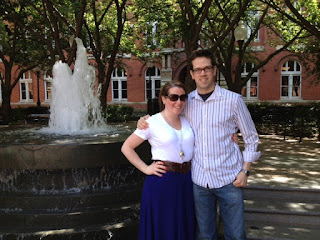 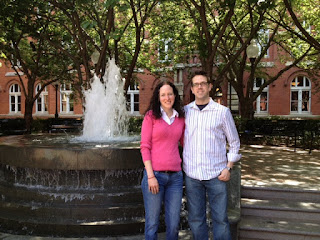 Then, we took pennies and threw them in to the fountain to make a wish! I think we were the only ones to have thought to do that... so maybe that means our wishes will definitely come true!

Mer and I walked a little around Georgetown before heading home. It was such a fun morning! I LOVE living in DC! I have quite a few things on my "DC Bucket list"... this was one of them and another is actually walking across the Key Bridge! Yet to do that... but I don't think I am leaving this area anytime soon... so I'll get it done! And actually... that will be a very momentous occasion for me... so I have to do it with just the right person! Ha :)