What a bizarre week... but lessons learned.... and that's the America I love

This time last week I could not have even guessed what the coming week would look like. The hype of Hurricane Sandy was all over the news, but deep down I didn't really think it could possibly be true. However, as the storm came closer on Sunday and the forecast didn't change much, I started to get slightly nervous.

On Friday I had purchased a new flashlight and found a store with batteries (after stopping by 4 that were sold out!) but I didn't really do any of the other preparations. I have a 72 hour kit, but I didn't really stock up on canned food and things that don't need to be refrigerated. Our apartment complex sent around a note with a list of things to do, one of which was to fill your bathtub with water for when the power goes out because this can be used to help flush toilets! That was a new one to me.

By the end of church on Sunday, basically everyone had been told they had off on Monday. The Federal Government, the DC metro system,... everything was shutting down. Everyone prepared to "hunker down".

Monday came. It was raining in the morning, but I went out to do some errands and the gym. It wasn't bad. But, by 2 PM, the wind was crazy as was the rain. My power flickered every now and then and I was so nervous I was going to loose it! I also didn't like the sound of the wind shaking the siding and the windows. But, on the other hand, I was really productive. I had lots I wanted to get done before the power went out and I did it! It was nice to know that I could just stay home. There was no reason to go out (even though I did take a risk and go to a friends for dinner... but they weren't too far away... and it was so much fun!!! However, the roads were SOOO deserted. It was weird to drive on them!)

The winds and rain were consistent over night and it was hard to sleep but I never lost power. I was so grateful for that! Everything was shut down on Tuesday too as there were downed trees, flooding and debris everywhere. It was also still raining and pretty windy. But, I was able to venture out on Tuesday afternoon and people were starting to return to life as normal. Wednesday - everything was back to normal and life moved on. I remember thinking as I was out doing errands on Wednesday and the sun was out... it was hard to believe the previous two days had been so terrible.

It's so sad to hear about NY, NJ and CT which bore the brunt of the storm. I can't even imagine what they must be going through to be without power still, have their roads flooded for days/weeks, and some have truly lost everything. I feel very fortunate and blessed. And, I did learn a lesson - as also taught in the scriptures - If you are prepared, you shall not fear. I could have been better prepared... and then maybe I wouldn't have gotten as nervous as I did on Sunday and Monday!

As I mentioned, there were some local problems with trees and flooding. The majority of people in this area lucked out because we had many days to prepare and many took the warning seriously. However, some things could not have been done to prevent what the wind was capable of.

On a more personal level, I was shocked when I went to work and saw this (I knew about it... but it's hard to believe the actual destruction) 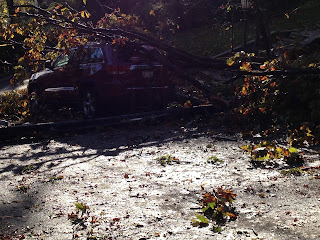 Can you see the Jeep in that mess? 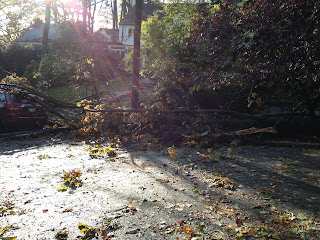 The tree was prob. 50-60 feet or more.
I tried to get a picture with the whole distance but couldn't! 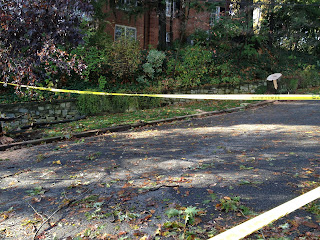 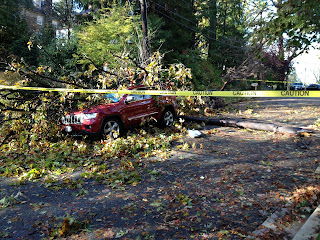 The Jeep is a Grand Cheroke.
It's quite large, but it doesn't look like it in this picture! 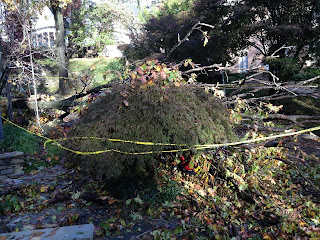 You can't even see it in this picture... but it's in there! 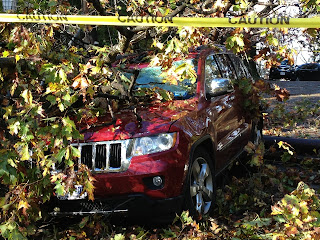 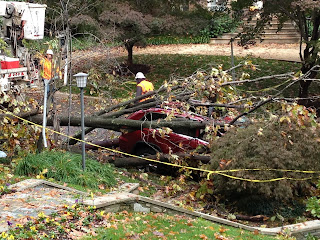 The trees in this area are SO tall! Everyone slept in their basements because of the sounds from the storm, but also because they were afraid a tree might fall on their house. And, from pictures of others, this can cause a ton of damage... a ton. So the family I worked for had a sleepover in their basement! Sounds like fun times for the adults, eh? 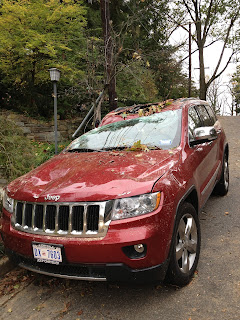 Pictures of the Jeep with the tree gone 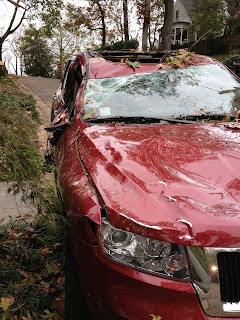 The damage was incredible. I can only imagine how loud the sound was when the tree fell, but it was at night and with the winds and the rain... no one heard it.

I loved this Jeep though. It was so big and powerful. I felt very safe in it... and it had a lot of little luxuries :) The car will be replaced... and all is well. I am just more grateful that the tree fell where it did and not on one of the houses.

Hurricane Sandy was powerful. It left its mark. Lessons were learned by all who experienced it. In the end I am very grateful for how the Lord blessed me through it all... and my friends and family. Others weren't so lucky and I continue to pray for them everyday. I love how this tragedy in many areas of the east brought people together. We're in election season and that has been such a "dividing" factor among many... but when tragedy strikes... it doesn't matter who you're voting for, or what you believe, we're in this together. That's the America I love.
Posted by Cara at 10:13 PM

So glad you're safe!!! I'm sorry about the jeep... that is a big blow, and a pain to replace. I hope we don't have any more storms like that for a long time!

Nice Blog - Thus we request you keep me sending such kind of valuable info.thanks a lot to this blog post - GPS Tracking System