First of many lessons learned in 2009... never, EVER, EVER, EVER turn off your heat in the winter!

On Friday I returned from PA after spending a wonderful few days at home with Evan and my mom. It had been about four years since I had actually been at home when another sibling was there... and it was just a lot of fun! It was great to have dinners with friends, learn to play speed scrabble (and get the worst score ever), go shopping at the outlets (and have my brother outspend me!!!), and just relax. I can't complain about the amount of vacation time I have... but it was still hard to say good-bye and leave on Friday.

Nevertheless, I returned to good ol' Somerville. (Successfully missing one snow storm on Wednesday. That's one less time this winter I have to shovel out my car. WAHOO!!)

Well, I had promised Juliette I would stop by her house and bring in the papers, mail, etc. and check on the house in general since they weren't returning from FL until later that evening. I decided to go there before going home. When I got there I could hear the alarm going off in the house. Who knew how long it had been going off! I entered and could see there was no fire, no one trying to break in, etc., but I also noticed the house was FREEZING.

As I passed the thermostat on the way to the basement (while the alarm is still blaring) I noticed the temp was 22 degrees. Brrrrr. Then, I noticed the HEAT wasn't TURNED ON!!! So, I turned it on. Brrrr.

I went down to the basement to turn all the power off in the house (since I had already tried to turn the alarm off in every other known way and nothing worked). I did. The alarm stopped, but so did the heat. Not good. I couldn't reach either Juliette or David, so I turned the power back on and called the alarm company (alarm still blaring but the heat is on at least. The alarm people, after trying to diagnose the problem, said it wasn't their alarm that was going off and they must have other alarms in the house. WHAT?!! I didn't know what to do now. So, I decided to lock up the house, leave the heat on (and the alarm) and go to the store (since the house was freezing) to get them some milk, etc in hopes of reaching Juliette and David soon.

I'll cut back on some of the tiny details, but when I returned to the house the 1. alarm was somehow turned off (no idea how/why); 2. House was up to 40 degrees; 3. Had reached Juliette and the Plumber was supposedly on the way (in fear of pipes bursting). So, I stuck around for about 30 min, but was FREEZING still. After talking with Juliette, we decided it was OK for me to leave. The plumber was on his way, right?!! Well, that's what one would have thought after him telling you this.

8:30 that evening (three hours after I left) the plumber calls me and tells me he just got there and that I needed to come over right away. I can't even describe in good detail what I saw when I initially walked in the house. Water coming from the ceiling, water on the walls, water on the floor, the ceiling had fallen through, water, water, water everywhere. Disaster. I was just at a loss because I didn't know ever where to start or what to do. After talking with Juliette (who's at the airport in FL waiting for her flight (4 hours delayed and finding out the state of her house) we did what we could, but decided that it was best to let all the water drain through and just get to work Saturday morning. (Can I just add that Juliette's hotel had burned down the night before in FL... there flight was majorly delayed... and now this. She can't even come home to go to the bathroom, take a shower... or anything. What a start to the new year!)

So, Saturday morning, I go over after basketball and a lot is under control. The plumber had brought his team and they were doing everything necessary to get it cleaned up and the water back on. They found the culprit that caused all the damage. 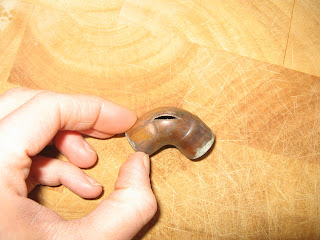 That's my hand holding this tiny, tiny, pipe. And, the tiny slit. Had caused SOOOOO much damage. Incredible. Here are some pictures of the room after a lot has been cleaned up. 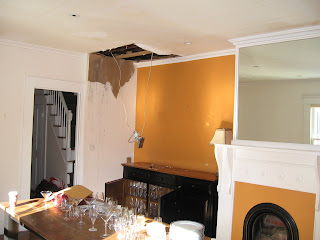 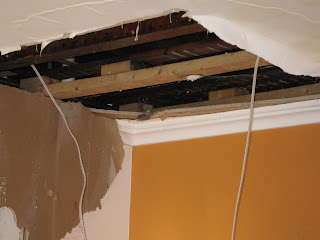 A close up of where the ceiling totally came through. Those are electrical wires hanging down. 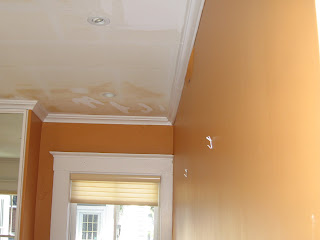 Other side of the room with water damage.

So, my first lesson of the new year is 1. Never, ever, ever, ever turn your heat off in the winter; 2. And, a few tips on what to do if you're afraid your pipes might have frozen. (Let me know if you want more details :)

I wish I had known this before Friday, but we learn many things from trial and error, right? I truly admire Juliette and David because they are so positive and look at what how much worse it could have been... and just count their blessings in many other ways. Also, they were very lucky (if you can call it that) in that the water damage was pretty much contained. It could have been much, much worse, but it was only in their dining area on the first floor and bathroom/laundry area on the 2nd floor. But, wow. It was IMPRESSIVE damage.

I took the kids for the afternoon so they could keep cleaning up the mess. We had a fun afternoon at the Boston Children's museum. This place is GREAT!! They have this climbing structure that I'm, jealous I can't go on. They also have many activities to get the kids physically active. They also had bathrooms with running water (which the kids were grateful for!!).

We got tickets to see a play and Cecilia was one of the volunteers from the audience. The guy is pretending to be "Arthur" and they were all building a clubhouse together. It was cute. :) 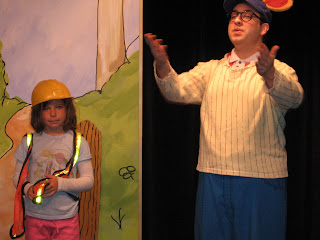 Cecilia "The Builder"
Afterwards I brought the kids back to my apartment to take baths and have dinner. It was SUCH a fun afternoon... but wow. I'll never forget walking into their house on Friday night... Still don't know why the alarm was going off. My theory now is that it was because it was tooo COLD in the house.... but maybe we'll never know!

Here's to the END of a wonderful week and a half of Christmas vacation. It's been FABULOUS. Truly. But, back to work tomorrow!!! :)
Posted by Cara at 7:20 PM

cara, I had NO idea about your house!!! WOW. I'm just in shock. That's a lot of damage!

I hope that all gets fixed soon! I guess...lesson learned :) By the way, if you want to apply the lesson in another way, you also shouldn't turn off your A/C in the summer (or at least let the house heat up over 90 degrees). At least that is what I have been told around here :) I suppose I never will have to worry about my pipes freezing.

OH NO! please send my good wishes to Juliette and David! That is horrible!