My third strike?? I'm swinging the bat... and it doesn't look like a hit!

I moved to Boston just over 5 years ago and days before this city entered the worst winter on record (in my humble opinion). I was not a happy camper... as my mother would say. I stuck it out, but in accord with Boston's worship of their baseball team, I decided that three strikes and I am out. Meaning three winters that are bad... and I am outta here! Strike one was my first winter here. Strike two was two years later... and now it's not looking promising :) Last week we were in the single digits for "HIGH" temps and we've had more snow on record thus far than totals for the whole season last year.

There are many things I love about Boston... or should I say things that make this city unique. Things that make me smile when I think of them cause you can only "live it" in this wonderful city! I could create numerous posts on Boston driving, street design, Red Sox worship... and on and on. But, the top of my list right now is Boston's parking and traffic rules - and SNOW (which, let me repeat... we've had more than our fair share of this year.

One of my biggest stresses in this city is parking. I've gotten crazy tickets for not parking 20 feet from an intersection, not moving my car for random street cleaning, parking too close to a fire hydrant, missing a meter running out by two minutes.... the list goes on and on. I have become very familiar with the court system and appealing tickets/going to hearings. (not something I will write on my resume anytime soon!!) I've come to loathe the ticket officers who roam the streets ready to hand out tickets to any unsuspecting car owner. Is it wrong of me that I have wanted to run one of them over??! :) I realize I am judging the position and not the person, but I loathe them!

Anyway, when snow hits, my blood pressure rises because of the panic of not finding a spot on the right side of the street... and then getting a whopping $100 ticket and a towed car. As a child I loved the snow. That meant sledding, hot chocolate, snowboarding down our tiny hill, and just FUN. Here in Boston, "snow emergencies" (which are declared for any snow amount over two inches... and means you can't park on the street) parking can become a true nightmare and a fight till the finish. Once your car is parked safely - you DON'T move it till the ban has been lifted.

Then, sadly, No - the headache doesn't let up when the snow has all fallen as the headache for avail. spots still continues. It has become such a problem in Boston that the mayor will send trash collectors around to pick up things like this... (all photos courtesy of Boston.com) 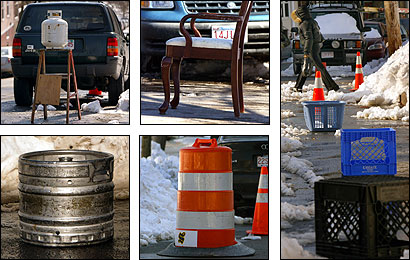 "space savers"! Yep, people will place all kind of things to save the place they dug out. Now, I have been so tempted to remove some of these place savers over the years, but I actually did this year when someone had the NERVE to put a space saver in a spot I, (NOTE "I") had shoveled out!!! Normally, I would be worried that doing this would cause the person to put damage on my car, but I wasn't letting this guy off the hook!

Here are some famous pictures of space savers here... 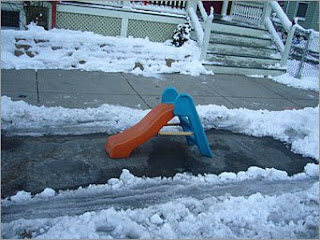 The backyard comes to the front yard. You can keep a watch on the kids and your precious parking spot! 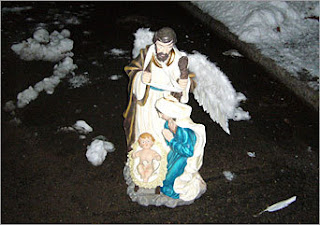 My all-time favorite is this. Who would move this??!

One of my favorite Boston commercials is one where someone is shoveling out a spot and another person drives by looking for one. The guy shoveling says "You lookin' for a spot? Here have this one!!" Then he proceeds to back away and let the other driver in. The commercial ends by saying "This isn't Boston"... and goes on to advertise for the Red Sox or something. It's hilarious to me... only because I've lived it!

When can I go back to enjoying the snow because I know my car is safe and has a spot? And, is this my next strike??!

hahahahahahaha! that was one of the first commercials I saw and couldn't believe that people actually did that. I'm so glad I had a driveway... Maybe this means you should move away from the snow to look at it from a far :)

Cara--this post is fabulous. Loved reading it and feeling right along with you!

I have never heard of anything like that...that is super funny, and annoying I suppose (to you)! I can't believe people actually do that. Funny how places always have quirks like that. Hopefully the next place you live has lots of parking so you don't ever have to hassle with parking tickets :)

Cara,
This was a really funny post. I liked all the pics of the space savers! :)