When I first started running in college (due to the inspiration of my fabulous friend, Maylene), I set a goal to run the Provo River Trail Half marathon before I moved from UT. It was good for me to set a goal that previously would have not even been dreamed of. It required me to be diligent about training and to actually follow through on something I had committed to. The race went well, for the most part. I just remember tears welling up in my eyes as I approached the finish line and crossed it because I was overwhelmed and proud of the fact that I had accomplished something that for so long had seemed so unattainable. Setting this goal and running the race gave me new confidence in my dreams and goals. I REALLY could accomplish things that seemed impossible to me... if I dedicated myself to it. I know this new confidence helped me the months following the race as I moved to Boston and had a VERY rough couple of months getting settled in this new city.

For the past four years, members of my church congregating have gotten a group (large group!!) together to run the BIG LAKE Half-marathon. Preparation starts in January and it's a big deal! (Kick-off parties, t-shirt creations (for TEAM Sweet-Feet), Pre-race Pasta party, etc). For the past four years I've always said "YES - I'll run" but when it comes to April, I've always backed out with some fabulous excuse I've come up with each time.

This year was different for a number of reasons. I have a little bit more time on my hands. My body has felt pretty strong... but I think the thing that really got me was that this was something I'd really like to do before I left Boston... and maybe it would be a good omen to jump-start my departure from this city for good. (Ran the Provo half a few weeks before I left there...). Also, because it was something I feared committing to because I knew it would not be pleasant to train the last few weeks and even to run the race! A goal I had been avoiding simply because I knew it would not be easy for me! Better to avoid than commit (hmmm... maybe that happens in other areas of my life as well :)
So, I committed. And it was FABULOUS! 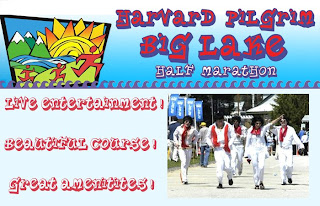 (Didn't see these guys... missed out on that one!)
The weather was PERFECT. I had been a little worried because it rained at times as we drove there this morning. We were in the mountains of NH, so it was cool with a nice breeze and mostly overcast so it never got sunny & hot. The scenery was pretty (but to be honest, I kind of zoned out).

A view of Big Lake. 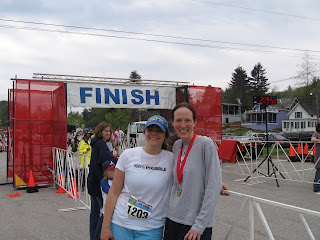 Lauren and I at the finish line. We LOOK good!! And, loved the medals!

MY TIME - 1:47.37 (but really, I think it's a minute less than that because I got totally STUCK in the pack at the beginning of the race!) I was proud that I was able to keep pretty consistent mileage at just over 8 minutes a mile! 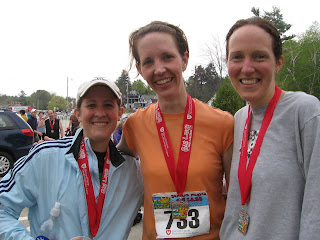 Shelly, Michelle and I 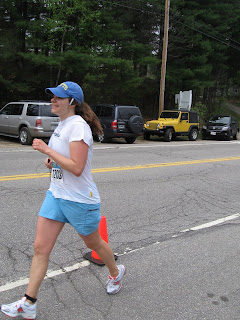 Lauren - All smiles as she runs the last .1. I am sure I looked just as good as her! (wishful thinking, I know!) 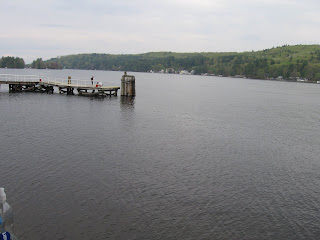 A view of the lake from the finish line.

Here's my TOP ten list of what I learned from the race:

1. I am not allowed to THINK anything for the first 30 minutes I'm awake if I get up before 6 AM. Getting up at 4:30 AM for this race seemed absolutely crazy this morning.

2. Don't eat or drink anything for 45 min before running... not me, but others along the way were feeling the pain of this mistake.

3. Never pass up a water station. You don't know when the next one will be!

4. Even though the rules say you can't listen to an I POD when you run... IT IS VERY important for me to BREAK this rule

5. I am a firm believer in CARB LOADING the night before a long run. I always thought this was a little bizarre. But, I can't tell you how much pasta I've eaten over the past few weeks and I know it's helped!

7. Hot Tub's were CREATED for runners to use after a race :) (in my opinion)

8. I have a special place in my heart for all the people who come to cheer during races. They put a smile on my face even if I didn't know them!

9. New Hampshire's mountains are truly beautiful :) That is one thing I will miss when I move...

10. THERE IS POWER IN POSITIVE THINKING and SETTING GOALS that are HARD to ACCOMPLISH. It's funny because I try and teach my kids this every week. I can't explain it, but if you think you can, you can. I want my students to know that they can do anything they set their minds to, yet I seem to doubt this when it comes to me :) However, I have renewed faith in that today as I used positive thinking on miles 4-5, 9, and 10-12... when things got harder for me. How proud of myself I would be to cross the finish line and accomplish this goal again and KNOW I did my best. Again, tears welled up in my eyes as I crossed the race knowing I what I had personally accomplished. Now only had my body been able to run such a distance, but what crossing that line did for my confidence, inner-drive, and self-esteem!

HOWEVER, I know without a doubt that I could NOT have accomplished this goal, or ANYTHING else in my life without the help of my Father in Heaven. And, for that I am eternally grateful. The medal I received is as much HIS as it is mine.

When's my next half? I think I'm OK for a while... But, I do want to be one of those moms who runs the last .1 of the race with her kids at the side... and then that 80 year old woman who finished today as well.

congrats! I'm proud of you and your pictures are fab!!

Great job! That's an amazing time, in my opinion.

One of these days I'm hoping to run either a half or a full, but I keep putting it off for whatever reason. You inspire me to just go for it!

hey, good job! i've run 2 half marathons myself (i know, shock, right?). they feel like such a huge accomplishment and then my body just aches for days after. i'm dead set against every doing another one!