My grandfather's funeral was last Saturday, July 18th is Jenkintown, PA. The funeral mass was held in the same church my grandfather spent many of his young "dad" years attending. My mom grew up attending the parish and her and her brother's went to the parochial school associated with it. It was amazing to me to think as I sat there that my mom had been in the same building many years prior doing the same thing I was doing - attending a mass!
The day could not have been better weather wise. It was beautiful! But, it was a long day.... I had forgotten that the birds outside of my childhood bedroom awoke at 4:30 AM and thought everyone else should too. I LITERALLY could have shot them if I had the necessary objects (sorry to any bird lovers... but I was so tired!)
The viewing was at 8 AM, funeral mass at 9:30 followed by the cemetery portion at 11:30 and the luncheon at noon. And, to be honest, no matter how much a funeral is a "celebration of life", and no matter how much you know that the individual is free from pain and the cares/troubles of the world, and how much happier they are being reunited with their spouse and family that has passed on, AND no matter how much you knew they were ready to pass on after living a long and very FULL life... funerals, in my opinion, still STINK!! It's hard seeing someone you loved so dearly and had been such a powerful positive influence in every step of your life, pass away. I tried to hold it together but three parts of the day REALLY got to me.
1. At the funeral home, we were asked to say our last good-bye before they took the casket away.
2. My uncle's gave a eulogy about my grandfather... and just thinking about all the wonderful memories and things we did together...
3. BUT, the things that REALLY got me going was the hymn everyone sang as we walked behind the casket and left the church "How Great Thou Art" I am TEARING up just thinking about that song! I think it developed serious meaning for me during my young women years in girls camp. I can think of many times when we would be singing that song, looking out over nature, and feeling the Spirit testify to me of the amazing and wonderful LOVE my Heavenly Father has for me. We all piled into our cars and I didn't want to talk to anyone so I was glad I was alone! I cried the entire way to the cemetery. (Fortunately we were going slow so I didn't worry about seeing through my blurred vision!
Overall, the funeral mass was wonderful and my mom had worked tirelessly over the past few days making sure that the ENTIRE day was planned out just like my grandfather would have liked (He really had given specific directions on what he would like at his funeral believe it or not! My grandfather was a planner!!) I think he might have chosen to have a different priest (he was a real character (!!) but we didn't have an option :) One of my cousins also sang at the service which was very nice. My uncle's, two cousins and my two brother's were pall-bearers. Sarah and I brought up the offertory gifts. Neither of us are catholic and I forgot a lot of what I had learned in grade school, so we were a little late not realizing we had missed our cue!
I was so happy to have the opportunity to go to the grave site because it also gave me the chance to see my grandmother's tombstone. She had passed away about 20 years ago. I am sad to say that I have not been back since, but I did get a picture this time.
Special things about my grandmother:
My middle name is her last name "Christie".
We had a special bond over our love for
JELLY BEANS! 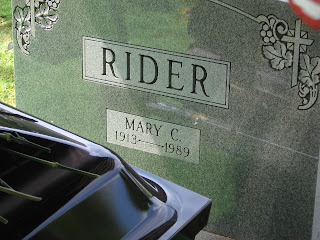 Pictures of my grandfather's
plaque on his casket 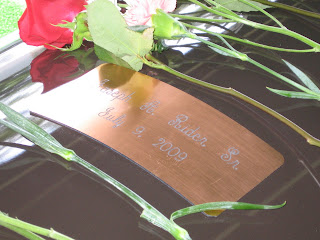 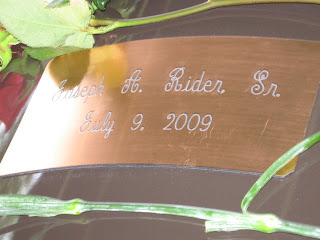 After the cemetery portion, we went to lunch at the William Penn Inn. My grandfather loved coming here with his family. We had 30 some people there and filled a beautiful room upstairs. There were extended family members from both my grandmother's and grandfather's side. I sat at a table with my immediate family and then some of the relatives from my grandmother's side whom I had never met or had met when I was little. It was so great to hear stories about my grandmother and her family as she was growing up... and the children that her siblings had! This luncheon was a great way to end a difficult morning. My grandfather would have been so happy to see everyone together and reconnecting over really good food!
One other very special thing that happened because of my grandfather's passing, is that my brother's and I were able to spend some time together. We see each other a couple of times a year, but not all together and usually there is a lot going on so we don't have much time to talk. However, this time, we actually were able to have dinner around the table with my mom on Friday night (like we did when we were little - my mom was a stickler for family dinners together!) and we realized at that time that it had been at least ten years since we had all slept under the roof of the house we grew up in. I felt closer to my brother's after spending this short, short time with them, but I am so glad we were able to be together.
So, of course, I insisted on pictures after the luncheon! The sun was right on our eyes :)
I love these two!!
My fabulous mom who can now be considered an event planner too!! Although, I don't think she'll ever quit her genealogy job to do it! 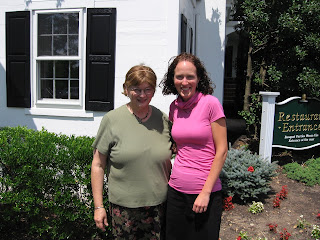 All four of us :)
I look forward to our next family gathering,
but can it be for a wedding and not a funeral? :)

I remember your grandfather, a little. Exhausting like you say, I can imagine but a wonderful opportunity to reflect on his life...and in general too.

Thanks for posting the pics of your family Cara! I have so many fond memories of you and your family!