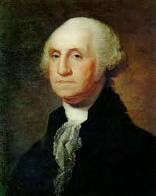 George Washington
What an amazing man and leader!

Martha - An INCREDIBLE woman!
As mentioned, my plan this holiday season was to be out and about taking advantage of all this area has to offer (holiday events or otherwise). Mt. Vernon has been on my list since I moved here in June!

Since my mom came to DC to help me move this week (save that story for another post!), we took advantage of each day and have done some fun things (like seeing another holiday concert at the temple visitor center and getting massages!). Mt. Vernon was a must this week as well.

The weather wasn't the best, but it was the only day we could go when it wasn't going to be raining/sleeting/snowing! It was cold and WINDY!!! The sun was out, but it gave me flashbacks to that BRUTAL Boston wind that just goes right through you to you core! Ugh... I shudder with memories!

We were at Mt. Vernon for 3.5 hours and didn't see HALF of what is there. You can spend a whole day!! (So I got a year membership. If you go 2 times during the year it more than pays for itself. And, since I just moved, my new ward building is literally 2 miles from this place. What a great thing to do after church on Sunday!) The grounds are beautiful and it's right by the river.

We went to tour the house first and had to wait outside for about 20 min. It was worth it though. 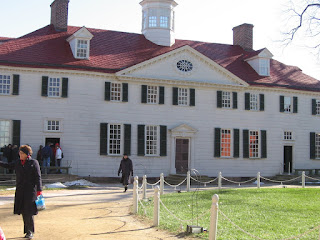 Picture of front of house. Quite LARGE for 1700's! 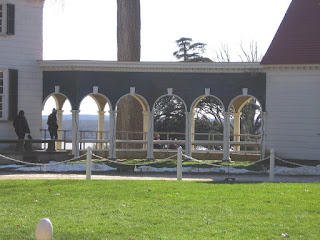 Building on left is his house. Building on right is the kitchen. But, I love looking through this walkway and observing how far they could see out their backyard! The river and the mountains! GORGEOUS! 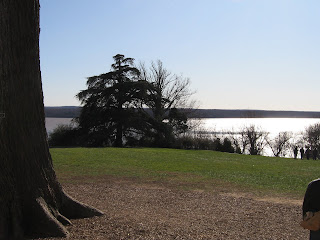 A closer view of their backyard view! 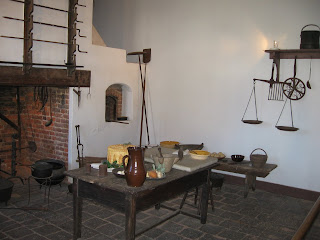 Kitchen. Wow, I have enough trouble cooking
in a modern kitchen with modern appliances :) 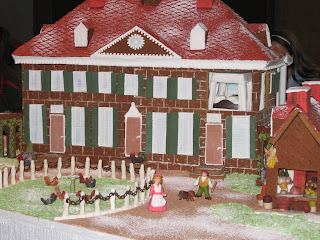 A GINGERBREAD replica of the house.
Very cute and festive I thought.
Only slightly better than the gingerbread
train I did with the kiddies!
I learned so much about George Washington that I never knew before (or maybe, just that I was actually paying attention this time!) I knew he was our nation's first president, but it was so interesting to learn about his childhood and the events that formed his life.

He was a man of character and pursued his dreams and goals. He didn't let others tell him what he was and wasn't capable of. He had high morals and values and wasn't afraid to stand for them. (I think he would have been a GREAT MORMON!!) He loved his wife and wasn't afraid to hide his love for her from others. Some of the letters he wrote his wife from the battlefields could be published in a romance novel! He treated his slaves with respect and with every ounce of dignity that was possible at that time. He had a variety of interests and one thing I TRULY love about him was that he wasn't out for his own benefit. He SINCERELY cared about others and our nation and did what he could to help us be FREE! He wasn't looking for recognition. He desired to do what was right and to help others! Love this man!

Martha deserves a lot of credit as well! I sincerely admire her as well. You can't have a great man without an equally great and admirable woman by his side, can you?!

She was a single mother before marrying George and her life became very complex as he grew in ranks in the military and government! She ran a LARGE household (and was often left for months or years at a time when he was off fighting the war or serving in government. To be with him, she would go and serve the troops under his command. Her undying love for and continuous support of her husband (even after he passes away) is truly notable and admirable! I admire her strength, courage and conviction. I can't wait to read more about her life!

I love Mt. Vernon and I've been back several times.