What to do when you're on your 6th straight day off from school!

Anyway - we had exhausted other options. Many museums are still closed. We did the movies. We did sledding and snow angels. We did arts and crafts. We did pretend plays and play dates. We did cooking and school projects. We did it!

So, what now? GET OUT OF THE HOUSE and drive somewhere!! Finally, the major roads are plowed (but it's INCREDIBLE how many side streets aren't. I would GO INSANE if that was still my street and 8 days after the storm I still could not get my car out because there was 3 feet of snow on my street. One would ask (in anger and frustration, I imagine) WHERE ARE THE PLOWS??? And, where are my tax dollars being spent?
But, our street is plowed. WHEW!!! So, I did some research and found SNOW TUBING! Fun for all ages and no skill required! So, I piled 3 kids plus one friend into the car with ALL snow gear (that's a LOT of stuff!) and we were off.

SO MUCH FUN!!! I forgot my camera in Denver last weekend so I had to get pictures of the resort off the website... and general pictures of the fun we had! BUT, I HIGHLY recommend this activity to anyone! It's not very expensive and loads of fun!

(However: a tip to all parents of kids under 5... you're most likely taking them on a smaller hill where there ISN'T a chair lift. YOU WILL be guaranteed a GOOD workout as you walk up with child and tube, watch THEM go down, and you then walk down the hill to meet them and back up again. Yep - after two hours you'll be exhausted, but the child will be ALL smiles... as was Jeremiah! Well worth it!) 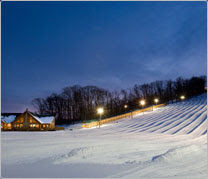 Liberty Mtn Resort at night.
We went during the day and the sun
was beautiful, but these are the tubing lanes! 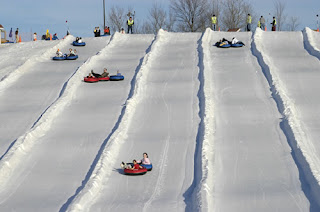 Picture of what we did...
although not a picture of us! 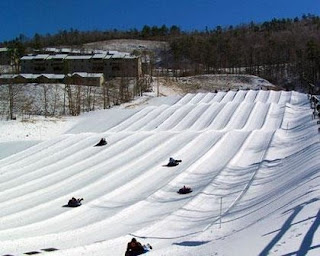 And, one more. You've GOT to go.
And, go down once or twice on your
stomach for an extra thrill!
Posted by Cara at 9:44 PM