Proud to be an AMERICAN!

So, usually my Memorial Day weekend activities revolve around lying in the sun, Bar-B-Qing, cleaning/errands, and relaxing. When I was growing up, we always had the annual Valley Forge Fun Run in Valley Forge park... which I truly miss!

And, I did get plenty of relaxing/eating this weekend between going to Lake Anna for a day and chilling at my pool for a while, but I also had a wonderful time actually doing some "Memorial Day" activities to honor those who serve our country.

I got very excited about doing this when I first heard about the "Rolling Thunder" group on Friday while watching the news. Now - a little unknown fact about me is that I have a fascination for
motorcycles
and I LOVE
biker dudes and dudettes

They are top-ranking on my "VERY COOL" LIST!
a list, which for example includes my little brother,
who I found out today is thinking of BUYING A MOTORCYCLE
AND he only lives 5 minutes from me!!

Now, he doesn't fit my stereotype
of how a biker dude should look (SEE BELOW),
but he does fit the BIG HEART stereotype!

Now, I could never pull it off and be half as cool as these "biker" people, but I can always stand in awe, right?

So, why this fascination? Well, motorcycles just rock! Such a little thing making such a loud "thunder" as it roars up the street... wind on your face and blowing your hair... just sitting ENJOYING a drive. I've only ridden a motorcycle 3 or 4 times and each was a crazy, thrilling experience (esp the one going up Provo Canyon at 11 PM at night in the middle of winter!)

Now I know this is a stereotype - but it's a good one. All the biker men and women I've met... all decked out in their biker outfits, with tattoos, and gruff look are really some of the "softest hearted" people I've ever met as well! They look all rough and tuff... but it's deceiving! So, that adds to my fascination with motorcycles and those who ride them!

Back to the "Rolling Thunder". I had never heard about them before. Here's a brief description of who they are: Members of the Rolling Thunder are veterans, and many ride motorcycles, but neither qualification is a prerequisite. Rolling Thunder members are old and young, men and women, veterans and non-veterans. All are united in the cause to bring full accountability for POWs and MIAs of all wars, reminding the government, the media and the public by our watchwords: "We Will Not Forget."

It all started in the mid 1980's with their decision to hold a rally in DC. Their arrival being announced by the ROAR of their motorcycles... hence, they would call themselves "Rolling Thunder". Word quickly spread about the group and what started out with just a few hundred motorcycles in the rally in the 1980's now attracts around 900,000!!!!!! All "ROLLING" into DC this weekend for me to see :)

How could I be so lucky to be here this weekend?!

Many have said that experiencing the thunder from the bikes and the roar of the crowd as you cross the Memorial Bridge as something that moves them to tears. ... and I can attest to the veracity of this because it brought me to tears! Here's my story:

I found out they were having a ceremony at the Navy Memorial downtown on Sat morning. I had never been to that memorial so I was excited to see it and their museum. I got there early and had the chance to walk up and down the row of bikes. Fascinating! 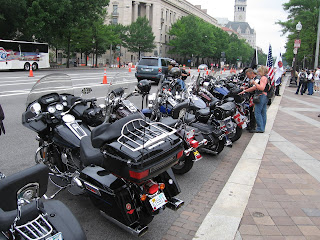 Of course, I had to take a picture of this license plate:
BEERCART
It goes along with my stereotype 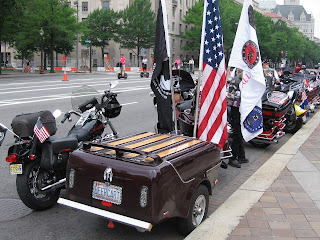 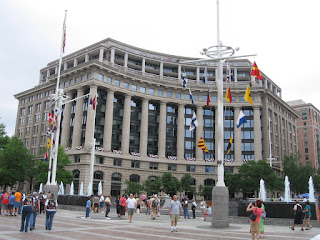 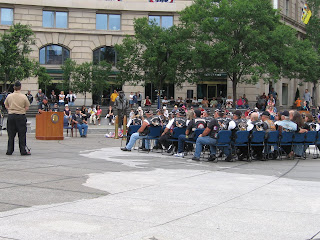 I toured the museum and then took the metro to Arlington National Ceremony (only because I wasn't special enough to have a motorcycle and travel there with everyone else!)

to catch the group traveling across the Memorial Bridge, past the Arlington National Cemetery, and was truly brought to tears as I saw A TON of people on the sidewalks cheering on hundreds of "Rolling Thunder" members on their motorcycles, with the flags on their bikes flapping in the wind, and in the background looking at the rows and rows of gravestones of those who have served and lost their lives all so that I can enjoy the freedoms I currently have while living in this country. 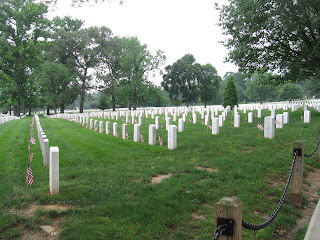 The rows and rows of graves 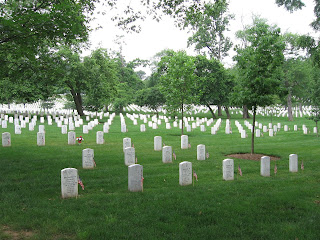 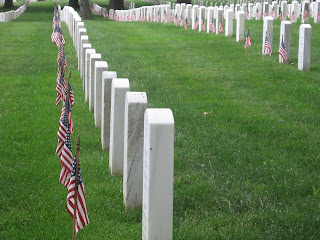 Then, an unexpected encounter... On Sunday as I was driving to Lake Anna I saw people lined along the overpasses as I was heading south. Not realizing or thinking, I assumed they were along some parade route for their town. Well, 5 or ten minutes later - TA DA... much to my pleasant surprise on the other side of the road was a long STREAM of motorcylces being escorted by police. Literally thousands! The police blocked all on ramps and halted traffic for about ten minutes so they could pass by on the highway. I pulled over so I didn't get into an accident as my attention was drawn to them. It was an incredible sight. Literally thousands. They just kept coming and coming... all with their flags waving in the wind. That's why all the people were lined up along the overpasses, duh! Oh -I so wanted to be a part of them!

Living now in this area, I have had the privilege of associating with many members of our armed services and also meeting their families. At the schools I work at, I work with children of deployed parents, trying to help/support in ways I can. It's a type of life I am not familiar with, but have enjoyed the opportunity to understand it a little better as I work with these students. I truly am grateful for the sacrifices those serving, and their family members, give our country.

I AM PROUD TO BE AN AMERICAN!
I LOVE OUT ARMED FORCES!