A tribute to my “little buddy”

A little late in coming... but wanted to take time to write it!
I love each of these kids A LOT.
Look at that SMILE!!
MAKES MY HEART MELT... :)

But, Jeremiah has a special place in my heart because I have known him since he was born, and we spent the most time together over these past five years. This past year he officially became “my little buddy” as we explored and paled around DC together. He was such a fun shopping companion too!

On my drive from NYC to Philly after dropping off the kids, I thought a lot about my little buddy and all the many things about him that would make me smile each and every day! I’ve included a brief rundown, but really, just his smile would light up anyone’s life!

He’s always running… always. In the house or on the sidewalk. Sometimes running circles around you if you’re going to slow.

He’s excited about ABSOLUTELY everything. I was reminded of this on our drive to NYC. Every truck he saw on the highway, every new sign, every change in landscape, he would point out something cool about it and think it was the neatest thing he’s ever seen! He would get me so excited about the littlest details I would usually just take advantage of and dismiss even thinking about how “cool” it is! “SO COOL” with an extended drawn out emphasis on the “SO”.

Jeremiah awoke with a smile on his face and enthusiasm for a fabulous day 98% of the time! It was a pleasure to get him out of bed in the morning… especially if I was tired or groggy, looking at him would help me change my attitude! 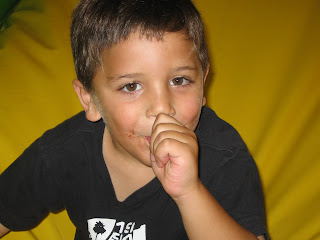 How he’s “SO HUNGRY” even after just eating a meal! Of course, he’s only “SO HUNGRY” if it entails cookies, desserts, a snack food or something else that appeals to him. Or, even if someone is having something and he’s not, he’s always SO HUNGRY at that moment and the only thing that will satisfy him is to have some of what they’re eating

The special bond my mother and him share for their LOVE of OREOS. Jeremiah would find all the hidden ones. He was so good at it and sneaky too! (Not a good thing… but looking back on it, it makes me smile.

He LOVES to be tickled and to be read stories. We had a very fun nightly ritual when I would put him to bed of reading two stories (usually about a train or fast cars) and then I would ATTACK him with tickles as he got under his covers. Of course, this did NOT help his ability to quickly fall asleep, but it was too precious a time for me to give up! And, he wouldn’t go to sleep without me doing it!

How much he loves to make desserts with me! I am not a good or fancy cook – AT ALL. But, one thing I LOVE is to make dessert!! And, Jeremiah adopted this passion of mine as well. Since he got out of preschool at noon, we would often make some kind of dessert together for his family after dinner or for when his brother and sister got home from school. I loved going online and trying to replicate those cute Betty Crocker fun desserts for kids… etc, but ours never turned out like the picture. It had a lot of love inside though!

My TARGET BUDDY! Jeremiah and I made almost weekly Friday afternoon visits to Target. He was a GREAT shopping companion because he didn’t try to get me to buy everything he saw and liked. In his own subtle way he would try and talk to me about how neat something was or when he remembered having such and such… hinting that we should get it, but he always took “no” or “not now” and move on. And, because he was always such a fun companion at Target and very patient on LONG Target runs, I would always get him a Blue Slushy. He made shopping so much more fun for me because it was someone to talk to and he is a fun conversationalist!! Not the best with fashion advice though

Jeremiah is the youngest, so he talks loud in order to be heard… and he LOVES to talk! So, the noise level in the house is louder than a typical family! He also tries so hard to keep up with his brother and sister. He wants to run as fast as them, but his little legs have to work twice as hard! He wants to do homework just like them and convinced his preschool teachers to give him some every night! He also wants to stay up as late as them and I LOVE how when I would let him, he would TRY so HARD sometimes, but it was adorable watching him slowly give into his tiredness and completely fall asleep. THEN, he would deny it and fight the truth of it to no end the following morning!

Even though this irked me at times, I had to mention his absolute hatred of having to play by himself. The worst times were when a sibling had a friend over and they wanted some alone time to play (which I think is totally fine but I know some parents think everyone should play together (siblings included). My rule was that they could have some time alone with their friend but they would also have to have some playtime with another sibling if home. Jeremiah would get so irritated by this in having to play by himself, but I am also a believer in that every child needs their alone playtime to use their imagination or create their own play rather than having someone or something tell them what to do! Oh – he would wander around ad complain he had “nothing” to do… it was so cute to watch. I would come up with like ten different ideas and he would just get more frustrated with me!

Jeremiah and I spent a significant amount of time in the car together… running errands or taking people here there and everywhere after school. It was not unusual for me to catch him singing quietly along with the radio. So adorable to listen to and he knew the words better than I! 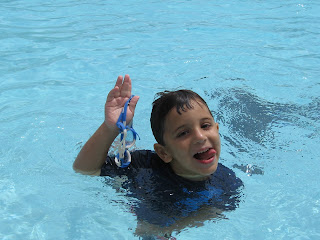 Jeremiah LOVES to swim. He was a fish this summer, whereas last summer he HATED to put his head or mouth anywhere near the water. He would scream bloody murder!! And, showering was torturous as well. But, somewhere this year that all changed and I could not get him OUT of the pool!


Jeremiah has a GREAT memory! When I first arrived in DC he had been there for a few months. He was only three then, but he immediately told me when I was going the wrong way or which way I needed to turn! His memory was also very impressive when you promised to get him something or do something for him that he really wanted. He would remind you over and over to ENSURE you didn’t forget!! 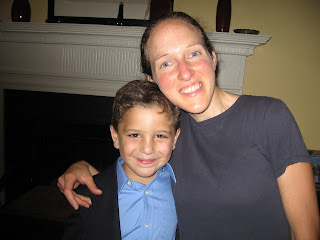 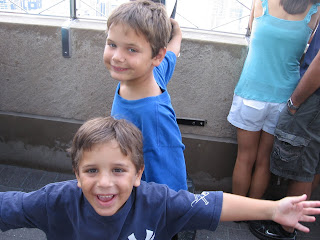 Just reach out for a BIG BEAR HUG!!

He is such a special little boy. He’s adorable and has the cutest eyelashes that will make girls swoon… but more than anything they will love his fun personality and zest for life!!! Each of these children has touched my heart and left imprints never to be filled... , but this child has left me with a renewed desire to have ZEST for LIFE and LOVE IT!!!
Posted by Cara at 1:01 PM