I recently started my new job... two days after I got back from Alaska (that post is still to come!)! I thought that was great timing and was grateful to have secured a new job before leaving for two weeks.

It has been quite an adventure, but it's been fun! I met the family for my first day of work in Philadelphia because the parents needed to be in the city that day for their work. Despite having grown up 30 minutes from the city, I do not know my way around it at all! We did go in as kids, but I was never driving or paying attention, and since then I really haven't been in the city very much... mostly because I don't really think it lives up to it name "The City of Brotherly Love"

But, because of taxi's we had fun going to a bookstore, then heading to the children's museum, and then back for a late lunch in downtown Philly (where we went to four different places for four different preferences of food... but fortunately they were all on the same block!) The children's museum was neat and I highly recommend it for anyone visiting the city with kids!

We met up with their dad in the late afternoon and headed back to DC on Amtrak. As a child, I was always on Amtrak heading between PA and RI to see my parents, but have not been on it since I was a teenager. Riding again brought back many happy memories of riding with my brothers and I always love watching the world pass by and we travel up and down the coast.

I spent the next two days with the kids in DC, but then on the 3rd day we left for two weeks on Nantucket Island! (I did a lot of traveling in August!) I had been to Nantucket with my uncle and his family when I was a teenager, but had not been back since. When I lived in Boston, we always went to the Cape, and when we visited my dad in RI we always got our fill of the beach, so there was never a strong desire to go to Nantucket or Martha's Vineyard.

I flew from DC to Nantucket and I would have to say that's the best way to go!!! (rather than driving ten hours and then taking a 2 hour ferry!) The island was just beautiful from the moment I first saw it on our decent and my appreciation and awe for that beauty never left. Someone described it as "magical" when I was there and I think that sums it up much better than I could put into words.

The island has done a great job of maintaining its unique culture and design. I love that fact that you wouldn't find a McDonalds, WalMart or CVS. Businesses are locally owned and the design of the buildings are similar. Those who live and work on the island take pride providing quality service and merchandise. Within 24 hours I had changed from being a person who's car was my home because I was in it so much, to being a person who walked, ran or biked EVERYWHERE I needed to go... literally. Everyone in the family had bikes. With the amount of people/traffic on the island's limited roads, biking/walking is the best way to travel because their bike paths are extensive and well taken care of. It's also a basically flat island, making this new form of travel easy and possible.

The first time I got on my bike, everything looked OK to me. But, man, by the time I got to my destination a mile away I was huffing and puffing and my legs were so sore! I thought I was just really out of shape. It looked like everyone on the island was in better shape than I was! My return trip home was just as bad and I initially thought I wasn't cut out for this island!! But, the next morning I had the chance to borrow another bike and got to my destaintion like it was a breeze! This got me thinking there might be something wrong with my bike and not something wrong with me!

So, the next chance I got I stopped by the local bike shop and asked them about it. They said my bike looked OK but maybe could use a little air. Well, I can't even describe my joy when I got back on that bike and biked around like I was walking on air. IT WAS SO MUCH EASIER! Lesson quickly learned (the hard way) what a little air can do for your tires!

One of my favorite things about the island was the yacht club to which they belonged. The club had two locations. One had the pools, tennis courts and snack bar. The other location was just on the edge of town with the main clubhouse, "sportsbarn" (with a fitness center and spa) and sailing program. Most of the time I was with the kids during the day was spent at the pool/tennis courts, but we did spend a lot of time just biking, playing in the yard and playing cards (I taught them UNO and they LOVE it!). On my days off, I loved spending time in town and at the main clubhouse/sportsbarn reading, relaxing, writing, people watching, or exploring. I loved coming to the club for lunch on my days off and sitting here enjoying the view. 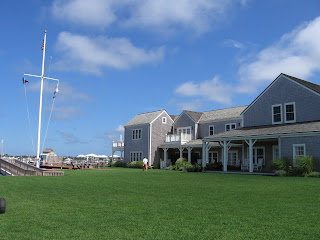 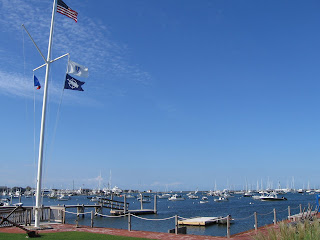 So relaxing. So beautiful!

The weather was just perfect for all but 3 days of our trip and it didn't get humid till the end.

Internet service was a luxury to be had when the winds were flowing in the right direction! Ha! I don't know what makes wi-fi work and what doesn't, but some days we got a connection and some days we didn't. No one could explain why, but people would try all sorts of tricks to get some connection in town. There were times when I missed it, but then just threw up my hands because it was out of my control and decided to make the best of it! This allowed for more game-playing time, reading, talking, and napping!

I did have the opportunity to go to church on the island. The island is 14 miles in length, but fortunately for me, church was held in someone's home literally a half a mile from our house, so I just hopped on my bike and went!

Church was a unique but wonderful experience. It was me, the local dentist and one family which consisted of two teenage boys, a mother and a father. It was not an official meeting or location, but getting to the main island for church every Sunday is impractical so they have their own sacrament meeting and Sunday School together! It was abbreviated church, but the Spirit was there and I felt so fortunate to be able to be a part of the worship service. It was so interesting to realize that for these boys there was no weekly mutual or other youth activities. They attended seminary by calling in every weekday morning to a class on the mainland. There was no youth program for them. I thought about how much I relied on my youth program for my friends, my social life, and for my testimony at that time. I also thought of how much I looked up to my leaders. I loved going to mutual to see my friends. Then there was Thursday night basketball practice year-round and Saturday games during the season. My youth group experience got me through my teenage years. I depended on it much more than I realized at that time. As I thought about this in Nantucket, my admiration for these valiant boys grew. One of them shared with me his EFY experience and how he replied on that strength, and what he felt there surrounded by all those youth, to help him through the year! Awesome!

The house the family owns in Nantucket is in a very cute neighborhood with many other children. Some of the houses are rented with guests changing weekly while others are permanent summer or year round owners. Normally, we would have stayed both weeks in this house, but because they had some family and friends coming into the area, we moved to a different rented house for a week so their friends and family could stay in the house they owned. This house was incredible! 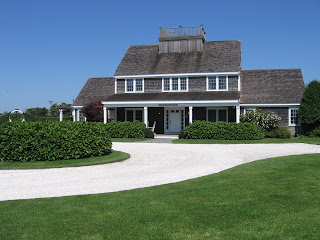 A picture of the main house with four floors and then a widow's walk on top that you could get access through my room. The pictures below are taken from the widow's walk. 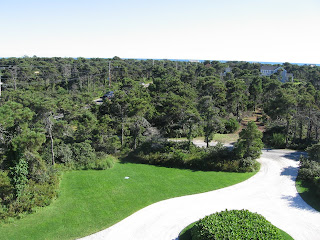 Our entrance to the property. We are four blocks from the beach! 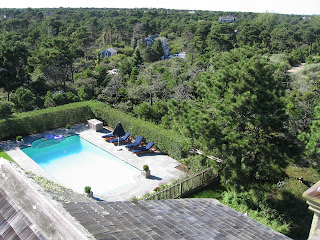 The pool and some of the backyard area.
The other side had a kids junglegym 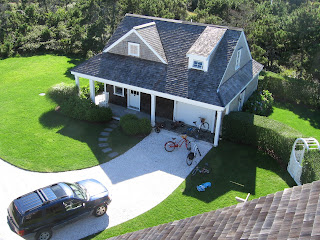 It was a busy two weeks with their party/birthday weekend celebrations, and just the many things the kids wanted to do! I loved the mornings where I got to get out early fr a run and explore the area. I didn't go on many of the bike trails, but maybe someday I'll be back and explore more. I loved just looking at the ocean and the boats, reading and relaxing (when I had time off!) and watching the sun set. There is something about nature, warm air, and the water/ocean that brings peace and serenity!

That place looks amazing! I bet it would take forever to mow all the lawns :) but they are gorgeous. So funny about church, though. Sometimes I forget that not everyone gets up and goes to church in a huge nice building like I do...ha I bet if you were a regular at one of those meetings, they would definitely MISS you and wonder where you were!