So, this has taken a bit to post, but life's been busy!


I left off the last post with my Friday afternoon visit to Julie. Well, from there I went back to Nancy's for some more time with her, Josh and the girls! Nancy's twin daughters are such girly-girls. I love it! They get all dressed up with nice shoes, hair neatly done, a very PINK coordinating outfit... and are just adorable! I need to take fashion tips from them :) 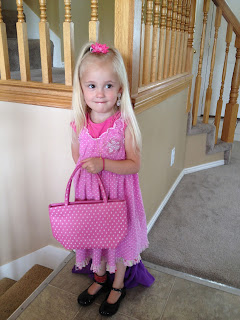 I had such a fun time reminiscing again with them (well, mostly just Nancy), and talking about the joys of my single life (in regards to guys/dating)! Such memories of doing the exact same thing at BYU. I wish I could sit in her kitchen every afternoon and just talk. It was so much fun! We took a picture and her two adorable girls jumped on in. They didn't want to be left out! Pink is definitely a favorite color in their family :) 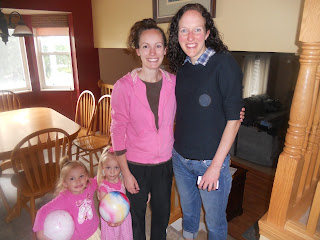 Well, on Saturday, the weather was MISERABLE for most of the day. I had really wanted to go and do a session at the Mt. Timpanogos temple since that is the only one I have been able to walk through before it was dedicated and I have just always thought it to be very pretty! ... But, thanks to Nancy I learned it was closed for cleaning. So, my next choice was the Jordan River temple.

I set off to the temple in the morning and it had just started to drizzle/rain. I was hoping and praying that the rain would hold off till later in the evening... or just not come at all because I wanted to go to the SLC REAL game later that evening. Well, the session was lovely (except I had NEVER seen so many cars and people at a temple! I guess that's normal in UT, but I was blown away by the sight!). When I left it was pouring. When I got back to my hotel it was chucking it down. OH NO! I love soccer in the rain... but not that much rain!

Well, luck was on my side! The SUN miraculously came out for a bit in the late afternoon and managed to stay dry until after the game! AWESOME! But, the wind did NOT get the message. It was INCREDIBLY windy. And cold! It was probably in the 50s but with the wind, it made it seem colder. People were decked out in their ski hats and jackets! I was OK though. My hands got a little chilly near the end, but I just remember getting back to my car and having to sit in it for a minute to adjust to not having the wind whirl all around me! I had given up on my hair right from the start. It was nice to be inside something and not having it blow everywhere.

The game was SO much fun! I had never been to a professional soccer game or this stadium before and I am pretty sure Braden hadn't either. The soccer players have a lot of muscle/endurance and a lot of talent! The REAL ended up winning, but it got very exciting next the end. And, I fell in love with their theme song that everyone would sing when they scored a goal. It sounded very Scottish, but I know it wasn't. They are a South American team. But, everyone would stand up and clap while singing it, and there's just the excitement that comes from cheering on your team. I had SO much fun! 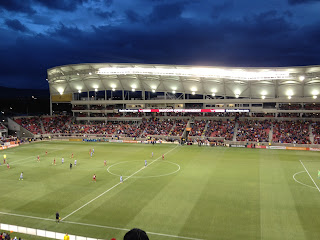 Afterwards Braden and I decided to go for something warm to eat... and I have a special place in my heart for cornbread... so he used his handy, dandy iPhone to ask Siri where we should go. And, she came through for us! She recommended 5 or so places in the area and Braden chose a diner near his house that he had never been to. And, it was the perfect choice!

The Black Bear Diner! It was close to closing time, but we were seated and I imagine our waitress was a little surprised when all we ordered was 5 corn bread muffins. She said they were small, but they were the biggest corn bread muffins I had seen! And, she warmed them for us so I just held one in my hands for a minute or two to warm them up! Then, it was on to my plate for some butter and honey... 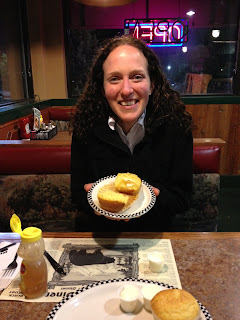 Can I just say it again?
Such a fun, fun night!

On Sunday it was sunny in the valley, but I could tell that there was snow falling in the mountains. So after attending a random congregation for church, I took a drive up Big Cottonwood Canyon. It was such a pretty drive all the way up as I went from sun down at the bottom of the mountain, to increasing clouds, and then snow when I arrived at Brighton Ski Resort! Not thinking, I had worn flip flops and so my choice of footwear was not ideal. I really wish I had been able to get out and make a snowball or snow angels, but Oh well! It was just pretty to be up there! 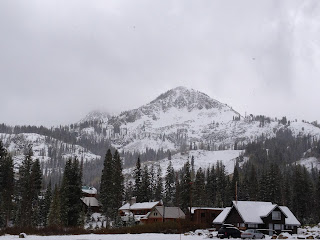 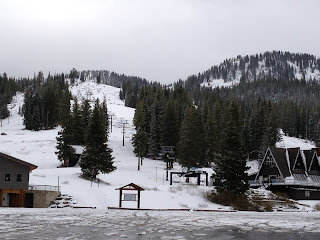 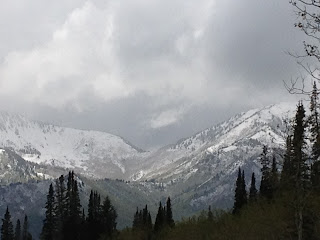 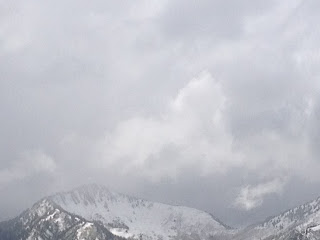 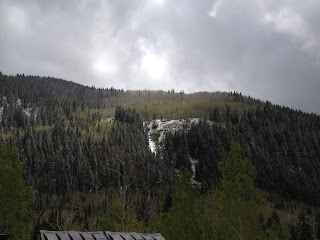 I absolutely LOVED my trip to UT. It was wonderful to get together with friends I love, relax a little, and to just get away from the daily challenges of life :) I look forward  to going back!
Posted by Cara at 7:23 PM