I decided to make a change. Do something different.

Boy - did I learn my lesson!

I went to a new salon that had gotten good reviews online and a friend recommended. I didn't go to her stylist, but figured that was OK.

I walked in and right away I didn't feel so good about my decision! I should have turned around then, but I didn't. The stylist just seemed like she was in a bit of a rush and that "she knew best"... so I shouldn't question. Looking back - I don't know why I didn't run in another direction, but I didn't.

I asked her to go a shade or two lighter. I made the mistake of mentioning that my hair tended to have redish highlights when I was out in the sun for a while. Well, she focused on the "red" part. Long story short, I walk out of there 2 hours later with DARK Brown/Black hair and it's also a deep RED color. It was disaster... and that's an understatement.

I was just so discouraged... frustrated... mad....on the verge of tears. It had been a long day and a hard week and this was just one more thing that had gone wrong!

Well, luckily I stopped by Mer's house and she told me that I could call the salon in the morning and complain... and ask the to fix it! I honestly didn't think it was possible, but I learned they can "strip" your hair. It's not healthy for it. Literally - they bleach it. But, at this point I'd rather not have any hai than the hair I did!

So, I called Sat am and the manager said she would fix it. Well, when I got in, she was there as well as the lady who had done it the night before. Awkward! We had a few moments of disagreement, but luckily it smoothed over pretty quickly. Sadly though, she was the one who also stripped it and reapplied the new color. Let's just say we didn't talk much while she did it.

I took a picture as she was finishing "stripping" my hair. It's hard to tell how light it was... but I have never see it so light! 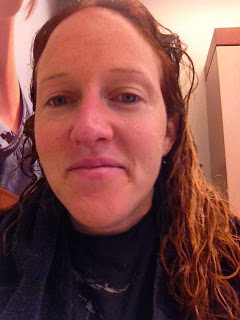 Here's a better picture of it! 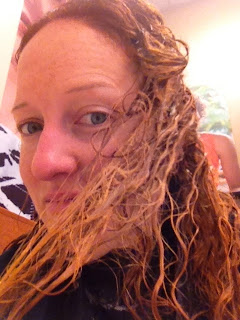 We decided to just die it a light-medium brown. Well, when she was applying the color I got nervous again because this looked blond! 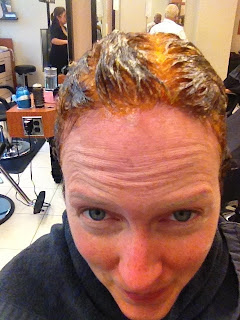 But, when it was done and wet, it looked super dark again. I just kind of threw up my hands! The stylist insisted on blowdrying it straight (further damaging it!) and it was a little light than I had first though. But, it seemed to also have a few colors in it. Especially around my face she hadn't totally removed the other color. Then, the top was still a bit red and the back was lighter.

Ha ha... whatever. I am forever messed up in the hair department. What's the use of worrying about it now. 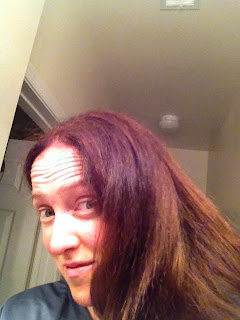 I like the light shade at the bottom and in the back.
I hope I can get it all that color someday. 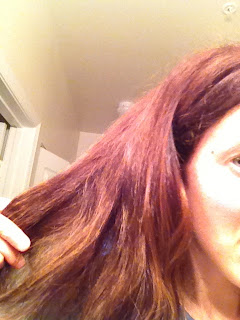 Well, this is what I ended up with after spending 6 hours in a salon I am not going back to anytime soon. So much for getting lots of things done on the weekend!
Posted by Cara at 3:59 PM