I have this bucket list. Everything I want to do before leaving DC. Some are fun things, silly things, etc and some are more serious.


Well, a few weeks ago I crossed TWO items off the list.
Now, that's a productive week!

Tour of the Pentagon!!

I had to apply for this back in April, but it was worth it!

So, you can't take picture inside the Pentagon, but you can in the VC area. They put up this fake stand etc for people like me... cheesy, everyday Americans wanting to look important :) 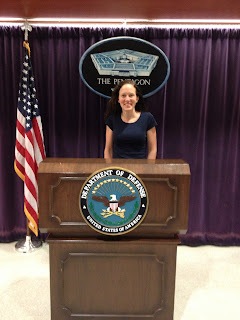 I also liked this "statue" they had next to it.
I am so PROUD to be an American! 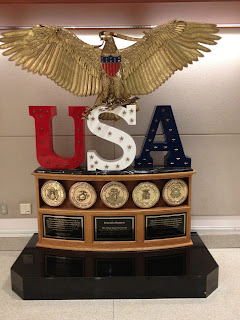 The Pentagon was AMAZING! So, the tour itself would have been super interesting for me if I knew about the branches of the military, their history and what-not. We basically spent the entire hour walking it's halls. But, that's also what I found more interesting! The Pentagon is like a city within itself! There are 5 sides, 5 levels above ground, 2 below (maybe more that are secret!!), and 5 ring corridors. All in all, if you walked the entire thing it would be 17.5 miles. And... I kind of feel like we walked that. With my knee hurting these days... that was a major undertaking, but VERY worth it! On the inside of it there is an enclose 5-acre outdoor area with another cafe. Awesome.

We had to go through two security entrances but I am completely smitten by military men. I'll go through any security they ask me to because they're just so dang polite! And, they look fabulous in uniform, I must say :)

As we all know, one side was struck by a plane in 9/11. 125 people inside were killed. We walked the way the plane came in to the building and stopped at some of the locations where the plane eventually stopped. Luckily the plane hit a side that had been recently renovated preventing it from doing further damage. But, there is a very sweet memorial and chapel inside the pentagon that we got to spend some time in. It was neat and yet, so sad.

I loved getting the chance to take a tour. I just wish I could have taken pictures... and even more so, it made me want to be an ARMY WIFE!!! Like in the TV show!


President Lincoln's Cottage!
I had only recently learned of this in DC... like last year maybe. It's an unknown gem. But, after seeing the movie about Lincoln last fall, and reading the book "Killing Lincoln", he has become one of my most favorite presidents. So, when a groupon came up with this tour I snatched it!

And, asked Mer to come with me! It was great!! I wish I had more time to look at the exhibits in the VC, but I'll go back. Our tour guide was very knowledgeable, but so were some of the others on our tour. History buffs with cool, fun, interesting facts. The house itself was plain... not much furniture because it had been used for an office building and hospital since the days of Lincoln, but it was neat to be there in the room while stories were shared and one could create an image in their mind with what life would have been like.

Lincoln was definitely a smart, courageous and wise man. He was a hard worker and faced many pressures from all sides, but I think he also had strong morals and wanted to do what was right.... even if that was taking the harder road.

It was a wonderful visit and I would suggest it to anyone! 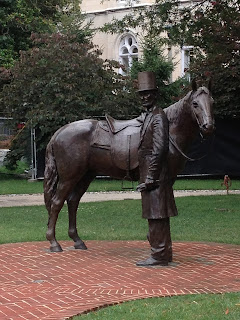 Mer wanted me to get a picture with her sitting on his horse.
They told us no. WHY not?! 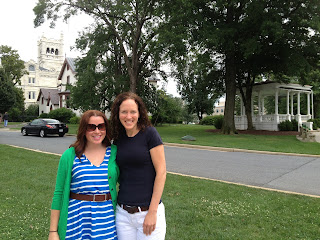 There was a wedding taking place there later in the day. Kind of a weird place to have a wedding... but wasn't my wedding, so who am I to comment?! 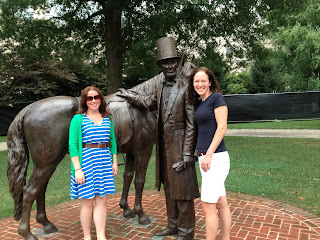