A memorable Memorial Day! And, Mr. Potato Head takes on a new occupation!

I am so fortunate to have my mom and little brother in town.

A three day weekend and beautiful weather in Boston (finally!) was the perfect combination for a trip to the North Shore (Cape Ann, specifically). The North Shore is the name given to an area north of Boston... and suprisingly right on the water :)

I'm sad to say that, yet again, in my four years here I have never been there. Little did I know what beautiful sites I was missing out on. We went to the farthest point on Cape Ann (Gloucester... pronounced Gloster... and Rockport... pronounced Rockport :)

For any movie buffs reading this, do you remember what movie was filmed in Gloucester. Here's a hint - Gloucester is famous for being a huge fishing town. Any guesses?

THE PERFECT STORM: (this is a combination of reports from Wikipedia and some of the official movie sites)
"A RECAP OF THE MOVIE - In October of 1991 a storm stronger than any in recorded history hit the coast off of Gloucester, Massachusetts. This "Perfect Storm" — so called because it was three storms combined into one — created an almost apocalyptic situation in the Atlantic ocean, where boats encountered waves of 100 feet (30 meters) — the equivalent of a ten-story building. These storms are some of the strongest and most terrifying manifestations of nature's strength."

"The ship, Andrea Gail, began her voyage on October 26, 1991. The last reported transmission from Andrea Gail was at about 6:00 p.m. on the evening of October 28, 1991. The Captain's final recorded words were, "She's comin' on, boys, and she's comin' on strong!" The storm created waves reported to exceed 100 feet in height, and these waves doomed the Andrea Gail and her crew of six somewhere along the continental shelf near Sable Island.

No further messages were heard from the vessel and no other ships reported hearing a distress call. On October 30, 1991, the vessel was reported overdue. An extensive air and sea search was launched.

On November 8, 1991, Andrea Gail's emergency position-indicating radio beacon (EPIRB) was discovered washed up on the shore of Sable Island. The EPIRB was designed to automatically send out a distress signal upon contact with sea water, but the Canadian Coast Guard personnel who found the beacon indicated that it had not been properly armed, rendering it useless. That same day, authorities called off the search for the missing vessel."

Back to my blog: I remember watching this movie with my dad when it first came out because one of his patients had a family member die on the ship. It's a good movie if anyone hasn't seen it!

So, as part of our tour of Gloucester, we wanted to do the "Perfect Storm" tour as well and see some of the famous sites in the movie, etc. There's a cool statue of "the wives and children" saying good-bye to their husbands/fathers as they leave on fishing expeditions and there's another cool statue dedicated to all the fishermen who have lost their lives at sea. Very touching.

Gloucester itself is beautiful once you get away from the fishing boats :) Their are gorgeous houses and beaches. Just a cute town.

We then moved on to Rockport which is smaller than Gloucester, but just as beautiful... if not more so! When we got there it was CROWDED and no parking, but my mom had a brilliant idea to pull off on this tiny side street and see if we could fins a spot. And, we did in front of this nice old man's home. We chatted with him a bit and walked into town. 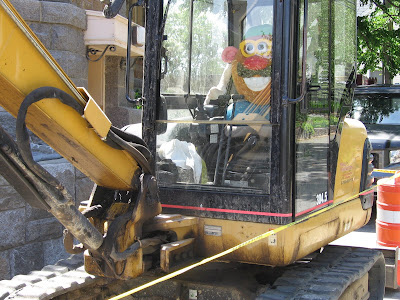 Mr. Potato Head is in control. Watch out! Evan and I couldn't figure it out if he was there just for a joke on memorial Day weekend... or if he was a permanent fixture... but it didn't matter. he made us all smile :)

Then on to town. And, yet again, what do I see? 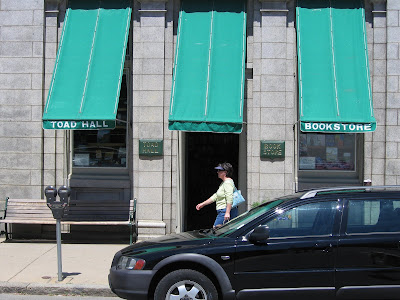 It's hard to tell but this is "TOAD HALL" Bookstore!

For those of you who have read Wind and the Willows "Toad Hall" is the residence of Toad who is "rich, jovial and friendly, but conceited, and tends to become obsessed about things, only to dismiss them later. A bunch of events happen and in the end Toad makes up for his earlier wrongdoings by seeking out those he wronged and compensating them. Toad and his friends live out their lives happily ever after."

I remember my mom reading us this book a few times and I loved it :) Seeing this bookstore brought back fond memories! 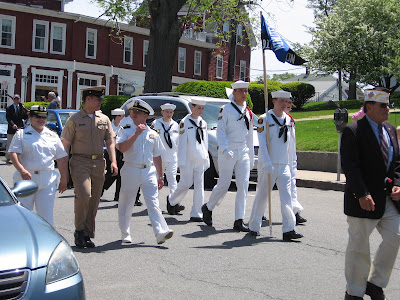 Then, we walked down main street and just in time for the parade! Although, it was bizarre. All the bands and musicians left the parade on a side street a block behind this and all the people marching, kept on marching down main street. We couldn't figure it out.

We continued our walk along the main street and then ate lunch on the beach and walked along the rocks. It was a perfect day! 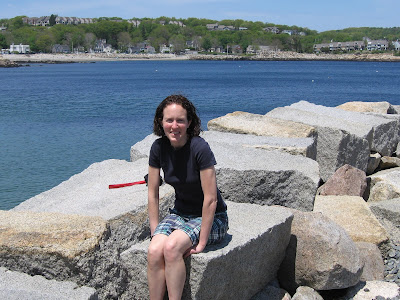 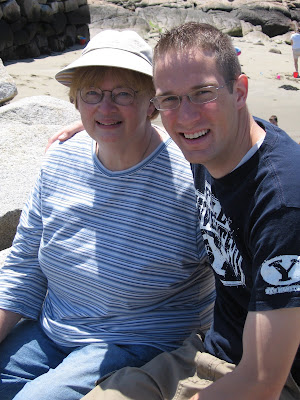