This week has been... awesome, overwhelming, packed with fun and a blur all at the same time! Last Sunday started with a trip down to my dad's in RI where I got to take an evening stroll along the beach and eat some of my favorite BBQ corn and grilled salmon on his new deck! We walked by one of my favorite places as a child... The Flying Horse Carousel... which I recently learned is: one of two in the state designated as National Historic Landmarks and most likely the oldest carousel in the nation. It's certainly the oldest of its type in which the horses are suspended from a center frame.

If you're curious... here's more info..."The carousel is believed to have been built in 1876 by the Charles W. Dare company of NY. It was part of a traveling carnival until 1879 when the carnival was forced to abandon the carousel in Watch Hill. Unlike most carousels, there is no wooden platform to support the horses but rather, they are suspended from chains. As a result, the horses seem to "fly" as the ride increases speed, hence the carousel's name. Each horse has a tail and mane of real horsehair and a genuine leather saddle.

One of MY FAVORITE things about this carousel was the BRASS ring you would try to grab as you went around. In the middle of the ride, a device holding metal rings is lowered for riders to grab as they pass. The "winner" is given a free ride token. I did win it a few times :) 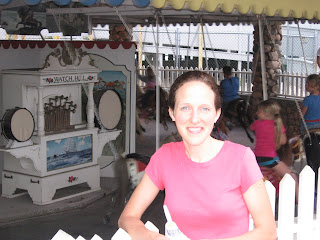 Do you see the child in the background looking back to see if someone behind her got the brass ring yet? 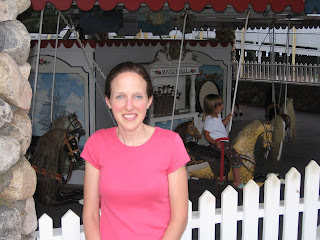 A better picture of the horse... there were too many people standing in front of the brass ring to get a picture.

This place also just brings back so many fun summer memories with the beach right behind the carousel, the sailboats and the Watch Hill Yacht Club where we would go sailing and watch movies at night, and the famous (but INCREDIBLY expensive) St. Claire's ice cream parlor. LOVE it though :) YUM! 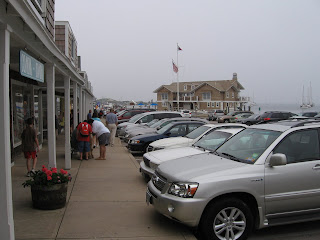 Some of the shops along the entrance. 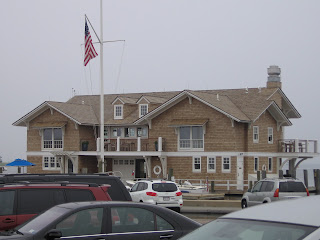 The Watch Hill Yacht Club where we would watch movies in the evening! I was never brave enough to take sailing lessons with my brothers!! I still don't like being in a sailboat when the wind is strong and the boat is tipping to one side. :) But, then I am told that without the wind... it's no fun. Well, they're wrong. I think that's the best kind of sailing.
Just chillin' in the bay sunbathing!
A wonderful, peaceful Sunday was followed by a painful and "UNFUN" Monday. I had to get a few tissue grafts on the left side of my mouth. I am so fortunate to have my dad as a periodontist and so he was able to do the procedure!

For those of you who don't know what this is, a tissue graft is when they take tissue from the inside of your mouth and put it on your gums on the outside of your mouth. Yes, painful. And, you also can't bite into anything, only chew on one side of your mouth, not eat any too hot/cold foods, and only eat soft foods for ONE WEEK! I have never craved a sandwich more than I did this week! It was a rough week in this regard... and sad to not have a hamburger at all the BBQ's I went to... (but I did cheat with the rules at times... I just had to! But don't tell my dad!)

After the surgery you have putty placed over the affected areas. So, all week it looked like I was keeping gum in the upper and lower left-side of my mouth. I even had people ask me why i was doing this when I was talking. Embarassing and Gross! I didn't take any pictures of this experience b/c I really don't want to remember it!

Onto the park fun. This week I got to spend a lot of time with Jeremiah during the day. I discovered that the spray park by their house also has fun craft and music days. So, not only can you get wet and stay cool in this heat, you can build castles in the sandbox, play on the slides and swings, make crafts, blow bubbles, and play musical instruments. It was a child's heaven! We spent many hours there... and each day Jeremiah didn't want to leave without his hat and sunglasses. Although he refused to keep the glasses on his eyes (he wanted them backwards on his head)... I thought he looked best with them on and with his hat sideways! 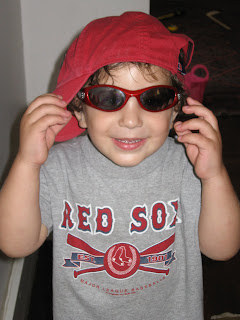 BBQ's were in abundance this week. Not only b/c of the 4th, but my Canadian friend, Lauren, had one to celebrate Canada day which is July 1st. So much fun!! 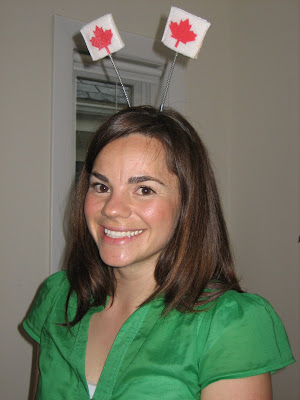 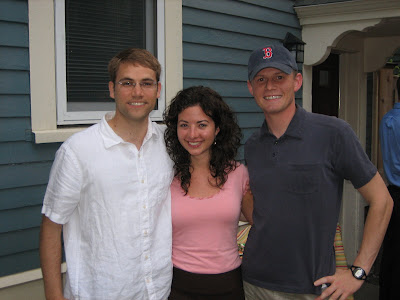 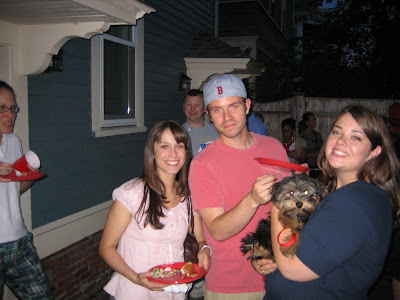 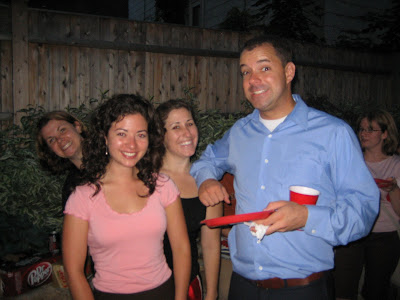 The 4th was fabulous as well. Rainy in the morning and a quiet day for the most part, but then I went to a BBQ on a rooftop in Cambridge. FUN! Then, I was so fortunate to have a friend who has a tenth floor apartment overlooking the Charles River. He also has a big screen tv. So, we all watched the Pops play and then the fireworks out of his living room windows (the entire room is windows!!) It was incredible! And, we saw the flyover on the tv... and then looked out the window and saw the planes to our left. AMAZING! The show/music that was played with it was fabulous and I can't wait till next year. I LOVE THE USA!!! 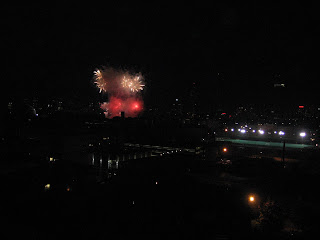 Ok -This picture does not do his view or the fireworks we saw justice. I should have taken a picture of the view when it was light out... but it was truly INCREDIBLE!

Saturday came and I headed back to RI to help my dad paint his new deck and to get my stitches out... Wow. What a week!

Thanks so much for sharing your wonderful week and all the great pictures. I'm jealous - I only got to watch the Boston Pops and the fireworks on TV - not fair!! But it looked like a fantastic performance - glad you got to see it in person - or at least from the 10th floor!

I think I posted this comment first on the previous week because I was reading both at the same time - the Edaville trip looked great too - can't believe you are lucky enough to have a "job" where you get to do these fun things! Enjoy the summer!!!

Wow - sounds like a fun filled week - minus the tissue grafts. Yuck. Hope your mouth is all better. I'm jealous of that view you had - what a great way to enjoy the fireworks show!