A Day Out With Thomas!

Well… I have to say that the summer has started off pretty well. My first “official” day with the kids included swimming lessons and then a trip to “Edaville”. Now, I had never heard of Edaville until I started getting this weekly email about things for families to do in Boston.

Here's info on the railroad... in case you're curious.

"The Edaville Railroad is the oldest heritage railroad in the United States and is located in South Carver, MA. It is a 2 ft (610 mm) narrow gauge line that operates excursion trains for tourists. It was built by the late Ellis D. Atwood (initials E.D.A, for which EDAVILLE is named) on his cranberry plantation at the beginning of Cape Cod.

Edaville ceased operations in 1991 and the equipment was sold to a party in Portland, ME.
Several railroad enthusiasts fought to resurrect the railroad, and in 1999, the new Edaville Railroad opened for operation. Edaville USA, as it is now known, is a small theme park with cranberry harvesting and railroading as its two main themes. It is a well-known family attraction throughout New England."

For a little boy… this place is HEAVEN. And, I would have to say for a mom (or individual spending time with the kids), this place is pretty great. It’s a small-scale amusement park so you don’t have too much ground to cover, but there’s plenty to keep you busy all day! They also have nice picnic areas, a simple outdoor playground and an indoor one (if it rains), as well as the usual ferris wheel, merry go-round, scrambler, tilt-a-whirl, etc!

As soon as we arrived, we ate lunch and then headed into the park. We were lucky to run into Sir Topham Hatt, (less formally but more commonly referred to as the Fat Controller) right away… Jeremiah was too scared of him though! Leo wasn't. He was all smiles :) 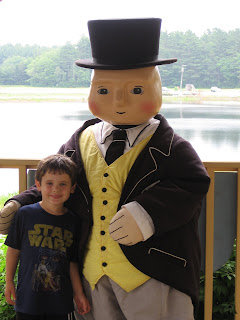 Here are some pictures from our adventures… 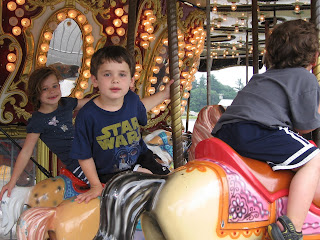 Jeremiah holding on for dear life... 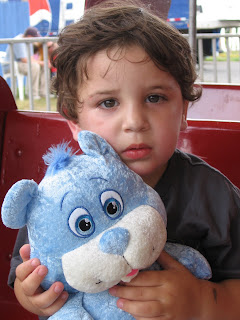 Jeremiah - not very happy... took a little warming up to the merry-go-round!

Actually, Jeremiah was scared of every ride as well! But, this place is great in that almost every ride he would go on, I could go on as well. He clung to me for his life (even on a ride as simple and slow as the merry go round!) and he refused to smile until the ride was over, but I thought it was adorable! This might sound a bit weird, but I valued being trusted and sought-after by him. He knew I would do anything to protect him, guide him and keep him safe even though he was experiencing some hard, uncertain, and scary things. I couldn't help but relate this to my life and my relationship with my Father in Heaven. I often feel like I am doing hard, scary or uncertain things... but am I always reaching out for, or trusting in, that protection and guidance I know in my mind and heart he will provide. Or, do I turn him away and try and do it on my own. I know if I had let go of Jeremiah while he was on the merry go round, he would most-likely have fallen off the horse and have been hurt. I know HF isn't pushing me away... but I know I've pushed him away at times seeking my own will and independence. And, yet again, how many times have I fallen and been hurt AND still continue to repeat the same pattern. Jeremiah's learned the lesson well. Why can't I as well? 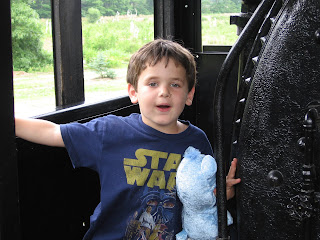 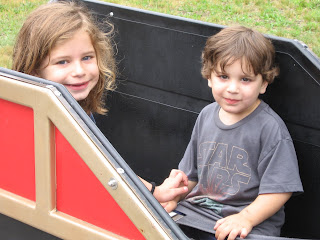 Finally a small smile from Jeremiah! 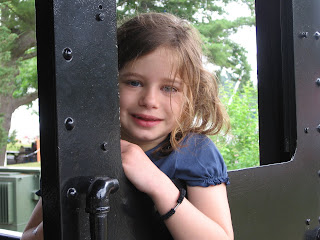 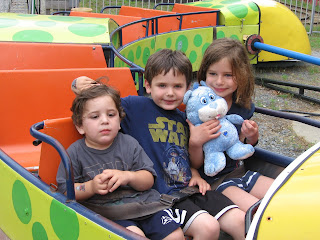 He's still a little unsure in of this ride... 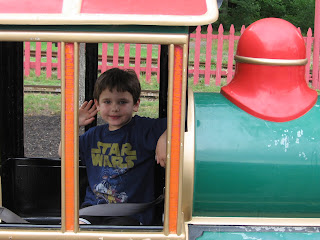 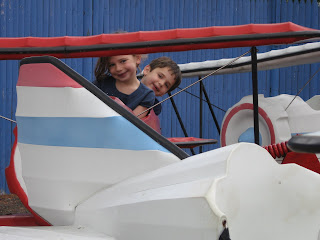 Obviously, there’s lots of trains everywhere… some to ride on and some to just climb on. But, the HIGHLIGHT of the day is a ride on the famous “Thomas” train. It’s a real train with GIGANTIC Thomas in the lead and the ride takes you all around the property and the lake. They have different scenes set up like you’re on a real train ride. The conductor comes around to punch your ticket and the kids get a “Jr. Conductor” certificate. Basically, they couldn’t imagine anything better than that.

Another bonus is that we went on a great day. Besides not having much sunshine, the place wasn’t crowded at all. It was a Monday and there were storms in the forecast. BUT, we were so lucky in that it didn’t DROP one single RAINDROP until I was putting Jeremiah into his car-seat at the end of the day. Then – IT POURED buckets as we drove away!! I was so grateful for the timing on that one. And, I won’t believe for a second that it was just a coincidence ☺

Thanks so much for sharing your wonderful week and all the great pictures. I'm jealous - I only got to watch the Boston Pops and the fireworks on TV - not fair!! But it looked like a fantastic performance - glad you got to see it in person - or at least from the 10th floor!