Friday was awesome!! Yet again, another beautiful day! And, yet again, we arrived at 6 AM, but were Mom and I ready for a 6 AM departure... I think not :)

We had heard that "THE THING" to do in Ketchican (besides the shopping and eating Salmon... you'll notice on their welcome sign (below) they claim to be the Salmon capital of the world!) 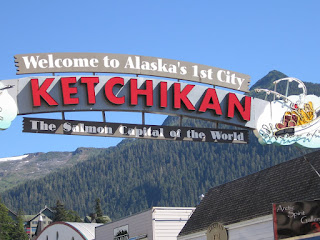 was to go and see a REAL Lumberjack show! It's called the "Great Alaskan Lumberjack Show" and it's claimed that viewers see some of the worlds best athletes in sport pulled straight from the heart of America. I can now vouch for that. Also, supposedly these things are on ESPN, but I've never seen it or heard about it. But, hey... if you're in Alaska and have a chance to see it - why not?! Here's the link for some pictures of theirs and to meet the real lumberjack men!

They stuffed so many people in their "theater" area. Literally, before the opened, the line for people with tickets was a few blocks long! Once we were in and found seats, we were split into two teams. Each team had two lumberjacks to cheer on! And, we did. Loudly!!

These guys were incredibly strong, but also hilarious. The show was filled with funny jokes and "side acts". 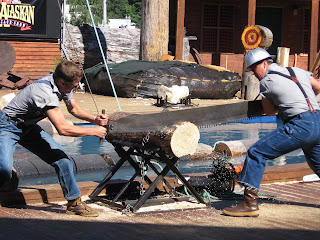 My team in the log cutting race. They went back and forth FAST! 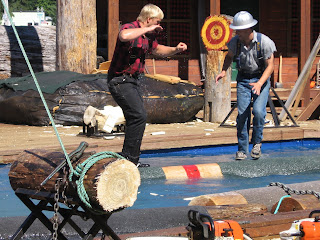 The log rolling contest. These guys were on different teams and the one to knock the other off first won! 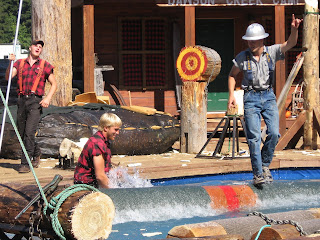 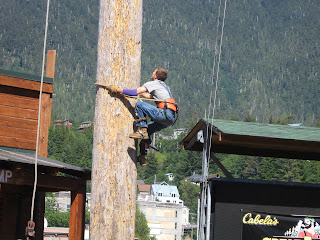 The log climbing race
THE VERY cool thing about this one is that
this guy has a PEG LEG and he's still climbing it!!!! 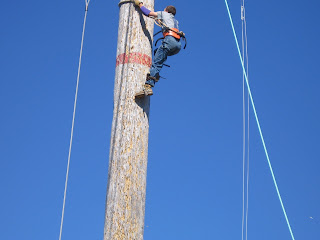 We won! With his peg leg and all!!
VERY COOL! 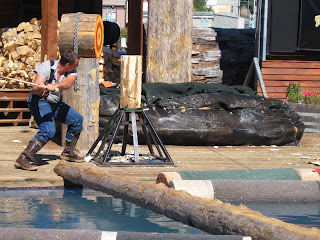 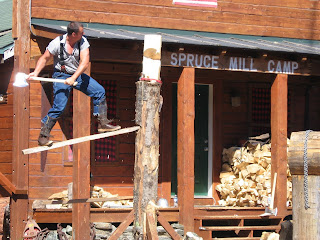 I have no idea what this one was now...
but it just looks crazy looking at the picture!

I would recommend this show to anyone. Well worth the time and money. We also had some extra time before seeing the lumberjack show, so my mom and I walked up to CREEK STREET (which is famous for it's stores) and the CREEK! Since it was salmon season and since we were in the salmon capital of the world, I took pictures of what the thousands of salmon have to go through to climb the ladders from fresh to salt water and vice versa. 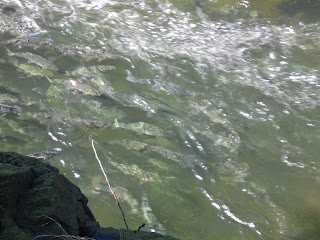 A calm area in the creek. I know it's hard to see the salmon in this picture, but there were SO many! 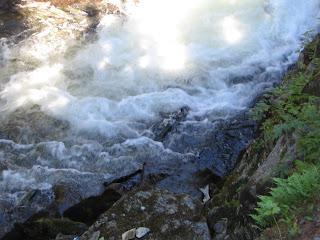 Ok - This is when it got crazy. The salmon were swimming against the flow of the river and sometimes having to jump rocks and other things in their way. I can't even imagine the energy it took them to do this! 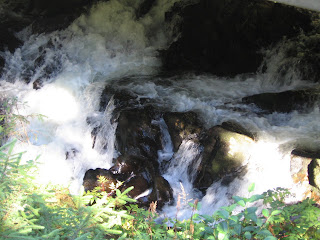 Yep - This was part of their travels.
Imagine having to go either up or down that! 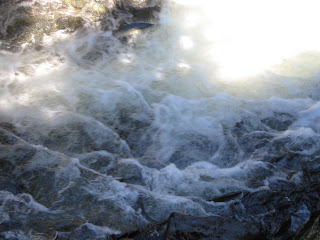 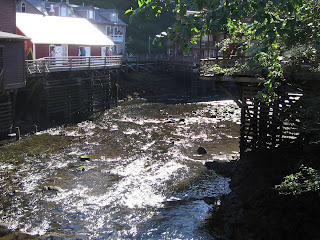 A view of the creek and the shops 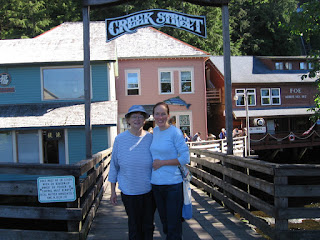 My mom and I as we entered our walk along the street.
No cars... only salmon and pedestrians :) 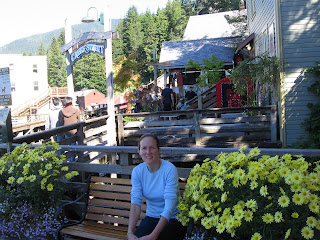 Me at the end of the street. Pretty flowers.
By this time it was actually HOT in Alaska.
I could have been happy in a t-shirt and shorts
but I hadn't brought any!

We did a little shopping and then boarded the ship for our sail to Victoria, BC. We had a nice time just resting and reading on deck, soaking in the sun. In the evening, I took these pictures of the beautiful Alaskan sunset. Beautiful and pure. 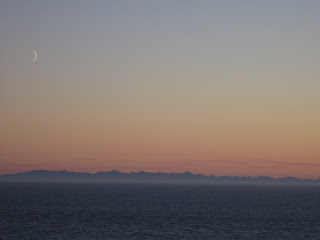 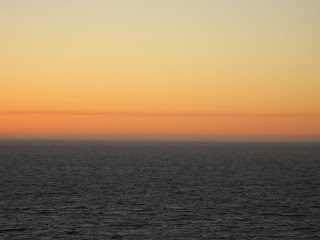 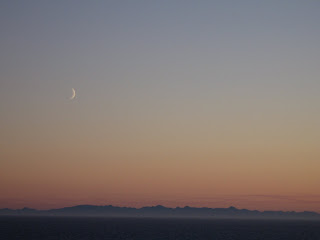 Saturday was our last day on the ship and we spent it sailing back down to BC and Seattle. My mom and I spent a large part of the day packing, because we had decided to deboard in Victoria and fly back to DC that way. The ship stopped in Victoria for the evening and then passengers got on board by 11 PM and arrived in Seattle by 8 AM, so we figured we were OK just getting off and taking a cheaper and more direct flight back!

To say the least, it was a little crazy getting a taxi and then getting to the airport. I'd have to say I am not very impressed with the taxi transportation system in this city. There are no set fees, so you can totally get "taken" by a taxi driver, but we had no choice. And, on the way there, our taxi driver tells us that our flight doesn't exist! Ha!! So, I panicked for about 30 min until we got to this VERY small airport! I ran inside and yes - our flight existed. But, I was shocked at how SMALL the airport was. We had a bit before our flight, so I walked around and read outside.

Minus the flight and lack of sleep, my mom and I arrived home feeling like we just had the most wonderful trip and wanted to go back right away! I am so grateful for the opportunity to go, especially for the opportunity to experience all of this with my angel mother! I would recommend it to anyone... and if you are thinking of going... let me know! I have recommendations and the BEST guidebook to share with you!
Posted by Cara at 5:27 PM