The Kennedy Center!! And, Brahms Requiem

So, sometimes my job has perks! Recently, I was given tickets to VERY good seats for a performance at the Kennedy Center. I've driven by it so many times, but have never been inside.

It is massive, but it's very pretty. We spent most of our time in the "Hall of Nations" and then in the Kennedy Center Concert Hall. The tickets were about ten rows back from the stage and we were in the center. It was amazing! 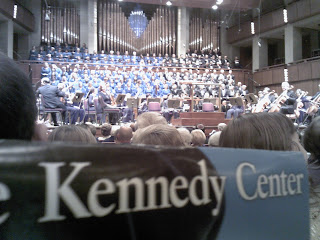 So, we found out after we had already taken some pictures that we weren't allowed to do so in the concert hall, but we did get this one. Bekah was smart enough to hold up her program at the bottom of the picture so that we had the words in it. The concert hall was huge, but it was so awesome to be inside!

The concert we were seeing was Brahm's Requiem. I had heard of it before, but didn't know much about it, or even what a Requiem was. So, last week I did some research on the piece, the author (if that's what you call him), Requiems in general, and the history behind its controversy. So interesting and I learned a lot!

It's not a typical Requiem (which is similar to a catholic funeral mass) because it focuses more on consoling those left behind rather than celebrating the fact that our Savior died for our sins, and as Christians that gives us hope! The overall message is that "they may rest from their labors; and their works do follow them." Brahm believed more in Lutheranism... and that led to some controversy about the piece. It's also amazing to learn what people took offense to in music and the arts... throughout the years. I just think they had WAY too much time on their hands! They needed to focus on something else. But, anyway, I am now a huge fan of this Requiem. I also thought the timing of my seeing it performed was nice considering the three losses of life I've experienced recently.

It was BEAUTIFUL (the combination of the words and music). It was also the last performance for the renowned Maestro Norman Scribner. At the end the audience must have clapped for over ten minutes (or it just seemed like that!) to celebrate the work this man has done over the past 47 years. Evidently he had a huge impact on the growth of the Arts in the DC area. I was also so glad I was able to call the AMAZING Bekah hours before the performance and that she could come with me! We had a great time and I am lucky to have her for a friend!
Posted by Cara at 10:59 AM

It was my pleasure! I'm glad you invited me and I was lucky to be able to go with you!