Sometimes, I just have to laugh. If not, I am not sure how I would get through life most days :)

This past Thursday evening, was one of those times... partly because I can't believe I am still in the single dating world!

I was on what would technically be defined as a "date" with someone whom I truly admire for many different reasons. We attended an AMAZING production at Georgetown University. 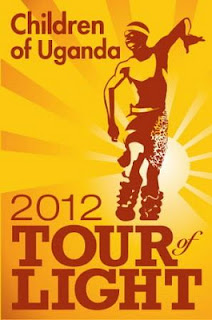 It's a music and dance production by children from Uganda (ages 10-18). They practice for months to come and share Uganda's and East Africa's vibrant culture with America. They are here for almost 2 months and many of them have never been on a plane, never seen the snow or the ocean, etc., so this opportunity is truly amazing for them.

On a side note: I read some of the brochure before the show started. Many of these children have lost both parents, and siblings to AIDS or other illness. They have overcome amazing obstacles. And, yet, they are filled with HOPE, SMILES, and JOY. It made me really think about all the blessings I have in my life and how much I truly take for granted. I was touched by their stories and inspired and uplifted by their smiles and their zest for life!

Below is one picture from their blog. You should check it out to see others... and they're still on tour for the next month so maybe they're coming to a town near you!  http://touroflight.blogspot.com/ 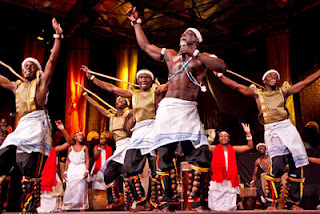 On average they do two, maybe three shows a day. (school children during the day) They all have amazing voices, and both the girls and the guys are BUFF. Honestly. I was in awe of the way they move their bodies (and how quickly!) as well as how fast their hands beat those drums. OH -MY-WORD!! It was an amazing experience!

Back to my story. During the production, there was one male individual who kind of provided us with verbal entertainment and explanation about each dance before it began. He had a heavy Ugandan accent, but he was fun and interesting to listen to. He liked to joke around with the audience and I appreciated that.

Well, before one song he started talking about how we should tell each other more often how much we love and appreciate them. His point was that in America we don't express our feelings enough to others. He had a valid point. But, he went on to tell the audience that everyone had to turn to their neighbor and while looking them in the eye, tell them that they LOVE them! Ha, ha!!! My "date" and I were sitting next to each other, but nobody was on either side of us, so we couldn't even joke and say it to some stranger first. And then the performer repeated it a few times in order to get his point across and make sure everyone was doing it!

IT WAS THE LONGEST 45 SECONDS OF MY LIFE

It felt like 5 minutes, but I know it wasn't that long. Everyone else was doing it to their friends, family or significant others... or there were kids sitting next to kids and they thought it was funny. But I just could not bring myself to do it in this silly, awkward single world I still live in! I just laughed and looked around to the other side of me because I couldn't even look at him while it was going on. Maybe this is why I am still single... I don't even know how to handle awkward moments! UGH! This is also one of the reasons that I firmly believe there has to be divine intervention for me to even have the chance for someone to want to marry me!

So, ha, ha... just had to laugh and hope that at some point in my life, this can happen again and it won't be
AWKWARD!
Posted by Cara at 9:25 PM