For those of you who know me... you know I don't cook. I make things that go in the microwave or eat cereal like it's going out of style.

However, recently I've found a little fascination with cooking. I think it basically comes from now having super early church (8 AM) so I want to have people over for dinner in the evening. If not, it's just a long day from when I leave church till night-time to not have any social interaction! I do love living by myself, but I also love having people over too! I like the option of choosing when to be social and when to be an introvert and curl up on my couch with a good book and not talk to anyone :)

So, I've had a lot of Sunday dinner parties here and they have been AWESOME! Not only am I getting to know people in my ward, and in the area, better, but it's been a lot of fun and a great way to end the weekend/start off a new week!

Well, recently I've taken a few photos of my cooking works of art. I've impressed myself! I love going to allrecipes.com and I recently discovered a site on pintrest where you can find some of these recipes posted. YUM

So, last week's menu was Roasted Rosemary Chicken. It got a lot of compliments! So simple. 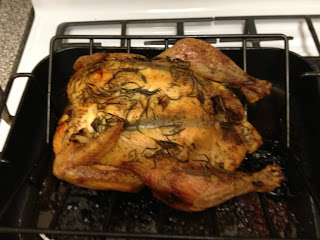 And, the great thing was that my home teacher happened to be over a few days before I cooked it and we got to talking about it. He is actually quite the cook himself, although he won't admit it, and he suggested I actually pull back some of the skin and place whole sticks of rosemary between the skin and the meat. I thought it would be harder to do and gross... but it wasn't. And, it definitely helped the flavor! I tried to show it in the picture below. 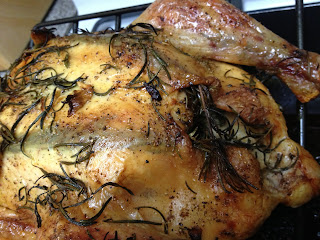 Then, next on the list was spinach mashed potatoes. UM.... YUM! Sadly, this is the first time EVER that I had made mashed potatoes. It always just seemed like too much work to wash, peel, boil the potatoes and my mom always used the instant kind... but I wanted these to be authentic! And, they were awesome!! I've decided that I like them a little lumpy... and since I am the cook, I got to decide just the right lumpiness! 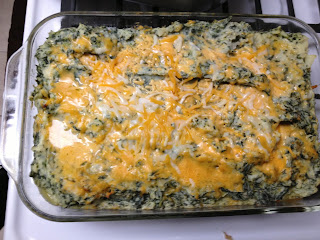 I also made a simple salad and salad dressing from a recipe that I had gotten from a friend for that same dinner. It has blue cheese and red onion in it. And, the dressing even turned out pretty good! I was so proud of myself! People were laughing at how happy and giddy it made me... but I used to think I just had no talent for cooking... and now look at what I created!

A week or two ago I made Roasted Sweet Potatoes/Potatoes with Rosemary for a dinner. My sister in law made them for Christmas and so I had asked her for the recipe. She said she got it from my mom, but I sure don't remember my mom ever making them.  I think Rosemary is my new favorite spice. It makes the food taste good and it makes my apartment smell good!! 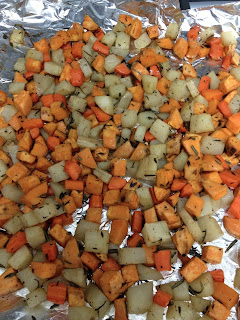 What else have I been up to besides work and cooking... Well, this past month I have celebrated quite a few birthdays of friends of mine. One of them was Misty! 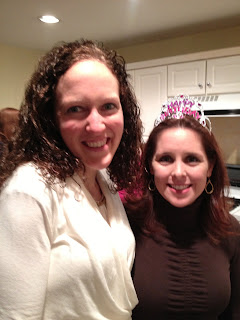 I knew her in Boston, but it wasn't until I moved to DC and joined the Potomac ward that we became good friends. And, what's even better is that I helped to convince her to move in to my complex and live the next building over. If there is ever a snow day or sometime where we can't go anywhere, I know I'll have a friend to hang out with!

Miriam organized an AMAZING party with fabulous food, decorations and everything a party could need. It was a ton of fun and I wasn't even the birthday girl! I did get to help by finding her tiara at a local party store :) 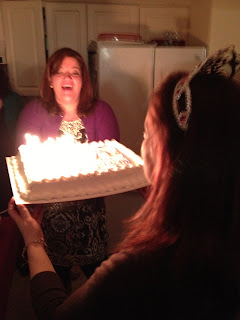 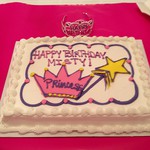