Family Time is the BEST time! And, CONGRATS Evan!

I had a special treat last weekend to be able to go to my dad's and have a little family reunion with my brothers and their families. It's very, very rare that we are all in the same general area at the same time!

I arrived on Saturday from Nantucket. Fortunately the weather cleared so flights were taking off again. I traveled on THE TINIEST airplane I have ever been on for the 40 minute ride to Providence! My knees were in the back of the pilot's seat and there were only three other passengers. I was nervous the entire time because I could see everything the pilot was doing and ever time there was a ding or a new light on the control board, I would look to see the pilot's reaction with initial panic thinking we were going down!

It was neat to fly so close to the ground that I could see things as we flew over it... like Martha's Vineyard and part of RI. It was also the loudest flight I had been on and others could tell I was not a seasoned traveler on these planes because the other passengers all had ear plugs!

Lesson learned for the return flight... but also, needless to say I was very, very relieved when my feet touched ground again!

Evan and Madison picked me up and off we set for good ol' Westerly RI. We weren't home for long before everyone set off for dinner and the North Stonington Fair. It's been around for years, but I have never been!

We ate dinner at the famous Mystic Pizza and I ate more grease that evening than I have eaten in a year! Oh - but it was yum :) I sat next to my 5 year old nephew and devoured his chicken fingers and french fries... on top of the mozzarella sticks and fried foods my dad had ordered for everyone as appetizers! I didn't have room left for my own dinner!

On to the fair. It was so much fun! They had everything a typical fair has... lots of food stands, rides, games to win prizes, etc. But, the first thing we ran in to caught my attention because I had never seen it before.

A truck pull!
We sat in the bleachers and watched as my sister in law and I tried to figure out the rules. We ended up having to ask the guy behind us. But, it comes down to an individual with a truck is given three opportunities to pull a heavy amount of bricks and they see who gets the farthest. 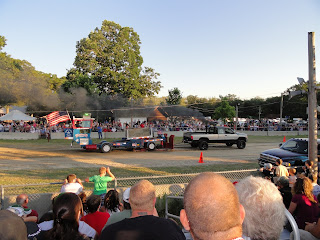 We also learned that those who deflated their front tires did much better than those who didn't. You can see that in the picture above. And, look at their extra exhaust pipe in the bed of the truck! 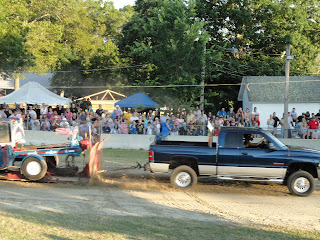 So, next we moved on to the cow pull. I think I've seen one of these before but I would never want to get in the way of these animals! 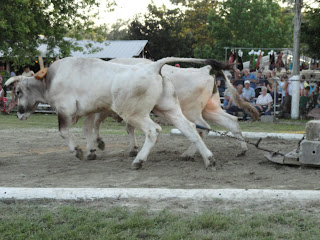 That's a ton of bricks! 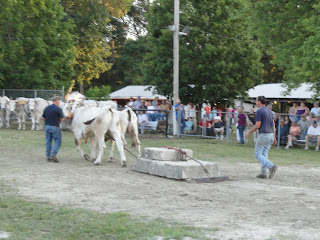 Well, there is no such thing as a fair without games and rides, so we made out way over in that direction... with one brief stop to get a family picture. 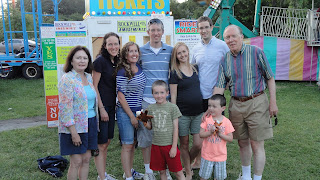 Riley and Jace had just gotten prizes ... and that's what they're holding in their hands. 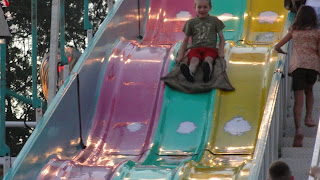 Riley going down this slide on a potato sack! 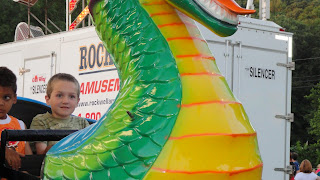 And, then on a dragon roller coaster 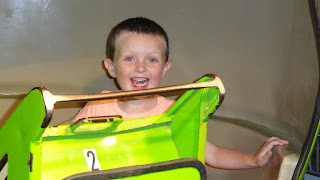 Jace got on his own tilt-a-whirl ride and loved it! 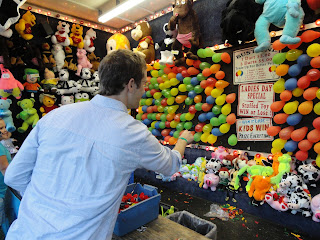 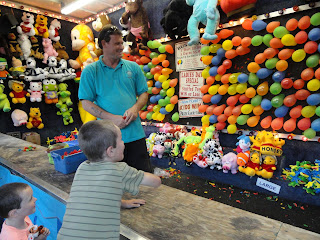 Riley did a great job doing the same thing and won his own prize! 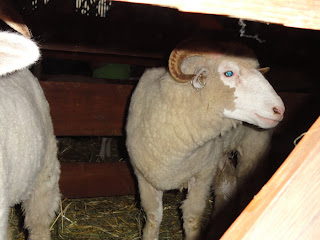 The boys really wanted to see the animals they had in cages. We saw sheep, hens, chickens, birds, bunnies, and other lovely farm creatures. 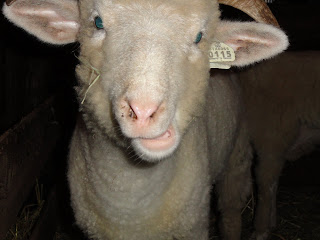 I thought this sheep was cute!

So, the reason Justin & Becca brought the boys to RI was for a vacation. But, Evan and Madison were there for a different reason! 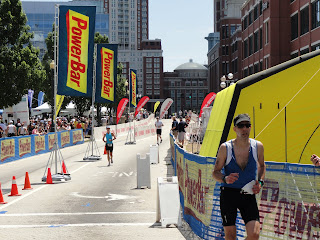 Can you see him in the white shirt? 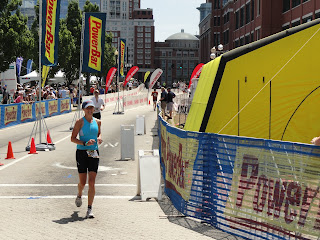 How about in this picture? 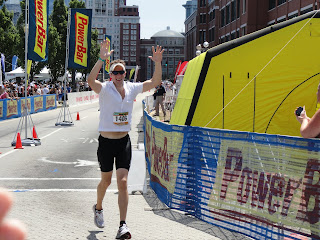 Can't miss the Half-Ironman Triathlete in this picture!!!!

I am so proud of Evan. I can't believe what he did to be able to finish this race and not keel over! 56 miles of biking, one mile swim and a half marathon - UGH. Just thinking about it makes me want to fall over! I was so glad we were all able to be there and see him finish though! 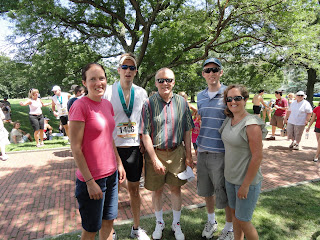 Madison took this picture right after the race... Evan's still standing. I wouldn't be! 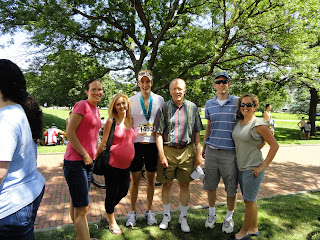 Then, we got someone to take our picture so Madison could be in it! She had been up with Evan since 4:30 AM and there at every transition to help him... and she's 7 months pregnant! 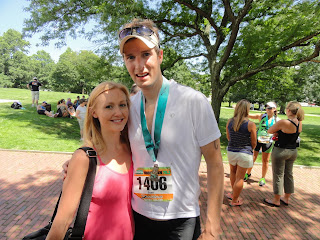 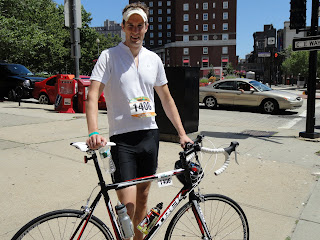 Evan with his rental bike!

So, another great thing was being able to celebrate my nephew's fifth birthday! Here's Jace blowing out his candles! 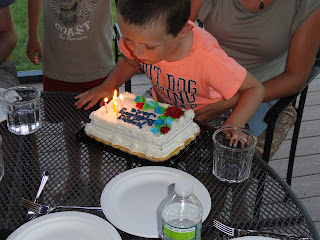 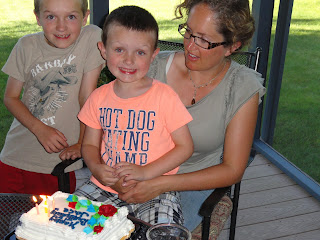 The next day was also beautiful. Actually, the whole weekend was beautiful, but we were able to go to the beach on my last day there. My dad only lives five minutes from it and we had special parking so we don't need to either wait in traffic or have to pay an arm and a leg for parking like other do!

My nephew's are FISH! They love the water! I loved being able to watch them and talk to my sister in law at the same time! 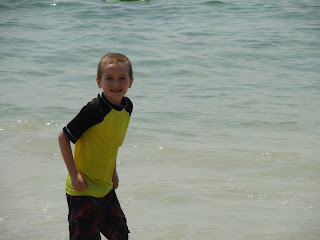 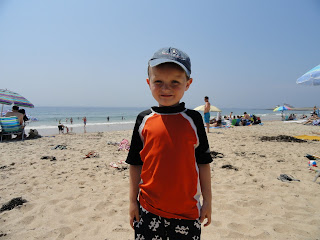 Such cute, adorable, well-behaved boys. I truly admire the job my sister in law and brother are doing in raising Riley and Jace. I just wished they lived closer! But, I am also excited for my new niece to arrive in September and she'll only be a mile from me in Arlington!

It was such a wonderful weekend. Playing tennis with my dad, going for a long run along the beach, eating yummy food, sleeping in my old room, and spending time with my brothers and their families, as well as my dad and his wife. I'd do it all over again every weekend!

And, Evan's inspired me to also take up swimming again. It's easy to do in Nantucket when I have access to two pools. So far, so good. Slow progress, but getting better with my freestyle each time I get in the water to swim laps. I can't wait to see what I am able to do by the end of the summer!