Nantucket life continued....
One thing I was a little worried about before coming to the island was church. I value, and gain personal benefit, from going to my church each week and participating in the three hour meeting. It rejuvenates me and is spiritually uplifting. It gets me ready for the week. I knew there wasn't a branch or ward on the island, but a small gathering of members in some one's home. It was an abbreviated meeting schedule and I was just worried about not attending my ward for three months! I knew there were "congregations" like this around the world, but never did I understand what it really was like until I actually was a part of one!

I've come to realize after attending here for a few weeks that a church service or meeting, is not so much what is taught or presented, but what you make of it. If I go, listen, and think to myself that this isn't worth my time because it's not like what I'm used to... or maybe the speaker isn't very eloquent... I'll walk away having wasted my time, gained nothing, and be frustrated blaming THEM for not providing me a spiritual Sunday experience.

When, in reality, it's completely the opposite.

It's up to me.
If I come prepared to learn, having read the lesson, my scriptures in hand, and a positive attitude ready to be an active participant/listener, I'll feel the Spirit and take away more than I could ever imagine!

One great thing for me is that it's about a minute drive from the house! 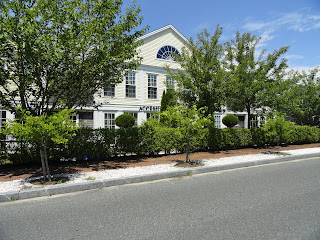 Well, here it is! Yep, we meet in the upstairs of a dentist's office! The dentist who owns the practice lives above his office (convenient, eh?). We meet in his living room because he has a piano. Were lucky to have the piano. The singing... well, let's just say it is not the Mormon Tab Choir!

We're part of the Barnstable branch, but to get to church, you'd have to catch the 6 AM ferry, cost around $100, and you'd get home around 5 or 6 PM. So, the branch president has given his OK for us to meet here. The weeklies consist of the dentist, another husband, wife and their 16 year old son, and another lady probably about my age who lives with her husband and son but they're not members. The husband of the 16 year old kind of leads our weekly meetings.

A few other people come and go. This summer, there is an older lady who comes every now and then because she's on the island for the summer. Her husband isn't a member though. Then, there's another girl my age who is here for a few months. She works for the Fish and Wildlife service and I don't know exactly what she does, but she's teased by others that she's here saving the birds. She works with the seals as well. I know she works out on the tip of the eastern part of the island because I ran in to her on one of my adventures a few Sundays ago! She's from Idaho though and it's been fun to get to know her (see later posts).

Then, to cap off this lovely, very random group of people -there's me!

So, here's how our services go. We gather and wait for anyone else to show up, so we usually start 10 min late. We have an opening song and prayer and since there is no announcements or business, we jump right into the sacrament hymn. The passing of the sacrament takes all of two minutes. I'm used to having a much longer sacrament time in which to gather my thoughts and pray, etc., but this speeds by too quickly!

After the sacrament, we have one person give a "talk'. Right now we're studying the presidents of the church and this week was David O McKay. It turns out to be more of a lesson, and since we're getting into more recent prophets now, some of the older adults share memories from their childhood. For instance, I learned a cute story about David O Mckay today. He must have been a jokester because two men got up to help him down some stairs in his later years (he lived to be 96). Well, with each on one of his sides he turned to them and said "Gentleman. I can help one of you down these stairs, but I certainly can't help BOTH of you!" :)

We sometimes get a little off track, but after we finish, we have a closing song and prayer. Then, we have Sunday School/RS/Priesthood. This is usually taught by the husband who "presides" at the meetings. Again, it's more like a discussion as he leads it. It's interesting and refreshing to hear so many different thoughts and views. All of us are SOO different, but we're alike in that we share the same faith and are here on this tiny island worshiping together. 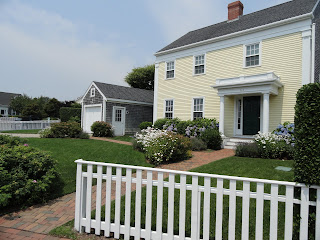 As explained in another post, the house we live in is considered to be "mid-island"... meaning it's not associated with one of the many beaches. It's a cute little community called "Naushop" and it's literally a ten minute WALK - yes walk - from the airport. It's very conveniently located to all the basic needs you would have on the island and there's a beach in any direction you drive!

The community is one huge semi-circle, with a couple of streets branching out in the middle. There's speed bumps every couple of houses, which is nice for kids to be allowed out riding their bikes and parents not worrying that someone is going to speed through the neighborhood.

Most of the houses look the same, and many have cute names above their front door that the owners have chosen. About 30% of the families live here year round, another 30% own the house and occupy it for the summer, and the other 40% or so rent it out.

I can only imagine what it's like living here from September-June!

It's a very cute house. Room to play in front and back for the kids and we are in the middle of the semi-circle, so we're not near the main road at all. There's also a tiny cul-de-sac right next to us, so it's an ideal place for the kids to skateboard and ride bikes. There's also a pool and tennis courts, but we never use those because they belong to a club that has all this and food you can order as well!

I really like most of their neighbors. Everyone is outside at some pt in the day... the kids play together and the parents chat. I feel safe letting the kids outside and not feeling like I have to watch their every move.

A funny, very unexpected thing happened a few weeks ago. The kids were just coming home from their half-day camp and a neighbor told them that three cows had just been walking in his driveway. He had been sitting outside reading, and looked up, and asked himself "What is wrong with this picture?"! Ha! I can only imagine. You're on a beautiful island filled with many luxuries... and you don't think that there are farms or animals nearby! But, as I found out, there is a farm just behind our neighborhood and the cows got loose! The police got on it and were captured :) All was safe once again.

The Cobblestones:
Yes, there are quite a few cobblestone streets on Main street (as you will see in another post) but I also fell in love with a free a capella performance on one of these streets at night on the weekend as well! They're called "The Cobblestones" and they're mostly locals who have day jobs and perform at night on the side! They're good and I enjoy listening to them. A small crowd will gather and others will walk and pass on by. On a nice night, it's a great way to spend an hour. 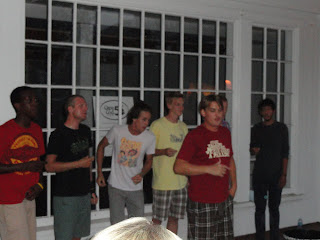