My new life... well, at least for a while

A little bit about where I've been since the middle of June.

If you're in to trivia (and haven't read this bog in a while)... here are some trivia facts to see if you can guess it.

1. First reported sighting by Norsemen in the 11th century.
2. The Wampanoag Indians were the original inhabitants and named it "..." which means "faraway land" in their language.
3. The year-round population is 10,000, but in the summer it reaches close to 56,000... and I am one of them!
4. It has the largest concentration of Native American place names in the country.
5. In 1977 it wanted to secede from the state it belongs to... but the attempt was unsuccessful!
6. It was the last community in its state to lift a ban on automobiles (1918)... and shockingly enough, I found a Ford Car Dealership on the island!
7. Benjamin Franklin's mum was born here. Cool!
8. It has 82 miles of beaches. And, sadly enough, I really don't like the beach! Not a fan of sand and salt water swimming :( Give me the chlorine any day.
9. It is a town, county and an island! It's 14 miles long and 3-5 miles wide depending on where you're at.
10. I am healthier living here. Why? Because not only do I swim, bike, run, etc., but "..." has its own source of fresh drinking water created by the glacier 12,000-10,000 years ago. Water is drawn from an aquifer that sits below the island. Ground water filters down through sand and clay. The clay prevents sea water from invading the “lens.” But most importantly, Nantucket does not add chlorine or any other additives to the water supply. So, since my basic sources of fluid are milk, diet coke (yes, just one a day), and water (but mostly water) ... I think the water is much better here!

So, there you have it. Guessed yet?

Well I am terrible at trivia and will forget all those facts an hour from now, so here's the answer: 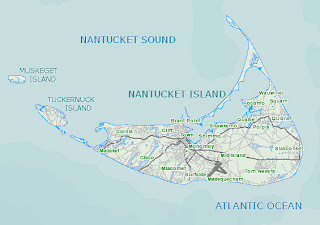 We are located around "mid-island", but as noted above... really, anywhere you are on the island isn't very far from somewhere else.

To be honest, I have felt a little claustrophobic at times. The only way off the island is to fly, or take a ferry. So, if there is ever a disaster, can you imagine 56,000 people trying to get off this island? And, I've so wanted at times to just hop in the car and drive to Boston... but that's not possible. I'd first have had to reserve a spot for my car months in advance on the ferry... and then wait for the ferry and go over. Inconvenient - YES!

There are many things I like about this island. First of all - it's beautiful. The flowers are in bloom, grounds are well-kept and litter-free, and there's a certain "beach" charm to the architecture and style of homes. There's also ample running and biking trails, outdoor activities, and a cute town to walk around in. I also love their airport! It's my absolute favorite out of all airports I've been in.

Why?
1. Check-in takes all of 2 minutes
2. TSA security takes about 5 minutes and there's never a long line. And, these TSA agents are actually nice and friendly. Imagine that!
3. The airport has consistent and good FREE Wi-fi!
4. The bathrooms are always clean!
5. It's not hard to find your gate since there are only 3 :) 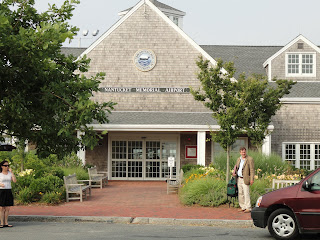 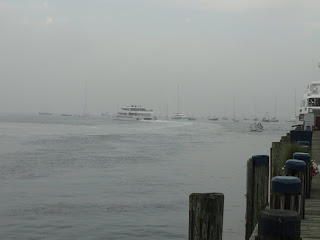 And, there goes my only other
transportation off this island!

So, what do I do with all my time?
That is a good question. A bunch of it is spent taking care of the kids. But when they're in camp, I do the usual laundry, grocery shopping, general household tasks, organization, etc. I've also cooked more in my life here than ever before! I've made my first "whole chicken" in the oven, as well as explored using the oven to cook and not nuking everything like I usually do. I've had general success so far! The chicken, however, was my absolute pride and joy! I wish I had taken a picture!

Oh - but I still find plenty of time to walk the cobblestone streets downtown. 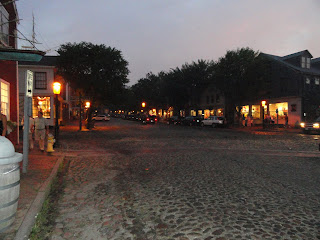 A view from the main road at night.
There are a TON of fancy shops, restaurants, etc. 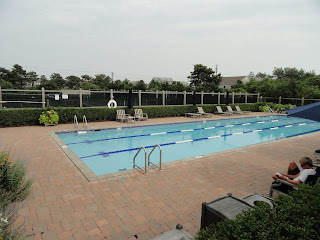 Here's the pool at the club that I use. I'm up to swimming 650 m... of course taking a few seconds to breathe after each 25 m... but progress has been noted! Can you see the lifeguard on the right side? These guys work 8 hours or so a day. I often wonder if they get hecka bored just sitting there... and how many books they get to go through in a week! There is another family pool right up a couple of stairs by this one, so they switch around a bit and the family one is always busy... but still! I would go out of my mind in boredom!

The kids (and therefore I) also spend a great deal of time in these two stores. The one on the right is called "The Sunken Ship". It's filled with toys, random clothing and gift items and anything water related. Kids LOVE it! Then, behind it is a place called "The Juice Bar." Don't let the name fool you. This place is anything BUT healthy! Shakes, floats, ice cream galore... all can be found at "The Juice Bar"... but not any juice! It's in a great location because it's on the same road that the ferry lets people off at as they disembark for the island! It's ALWAYS crowded! Notice the line by the door... :) 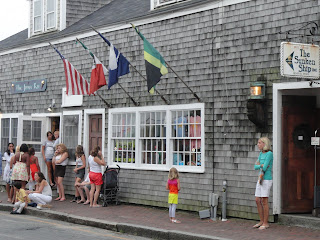 A lot of people bike everywhere on the island... but biking is NOT for me. I have a bike with a cute little basket in front of it, but UGH... not a fan of biking. Fortunately, I usually have access to a car. There is a Jeep, but the car I usually drive when not hauling kids is this cute little thing! 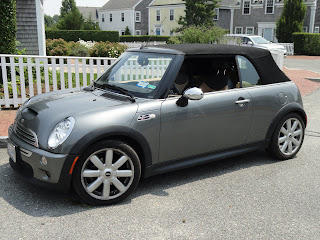 As some of you know, I am in the market for a new car. And, for a while after arriving here, I was thinking that I should get a mini. It's ideal for parking in small spots, it totally impressed me by the amount of "things" I can fit in it, and it's a cute car! But, after driving it for a while now, I realized, a mini is not for me.

Why?
1. I find it a pain to not have a backdoor to load groceries in and out of
2. It doesn't seem like it would do well in ice and snow
3. It doesn't have the powerful, safe feeling of being in a big car, raised above the ground.

But, it does a good job of "zipping" here and there and on the island, it gets the job done and I am so grateful for it!
Posted by Cara at 12:59 PM

Thanks for all the info! Looks charming, sometimes I get recruitment emails for travel nursing jobs in nantucket and think about going. I think you're right though, it could get hard to feel "stuck" on the island.