Last weekend I had the opportunity to go back to NYC with Meradyth to celebrate a Braden's birthday! Since I had worked so many hours that week, I had Friday off. This allowed me to take an early bus and get to NYC in time to visit J.T. at the school she is principal of! It was the coolest experience. (The bus trip on the other hand was terrible. It was one of the HOTTEST days out and the AC in the back of the bus, where I was sitting, was NOT working! A few times I literally thought I was going to pass out. The driver told us he would stop and get another bus, but that would delay us 3 hours. No thank you - press onward, please.) I got there. I survived, but NYC was also so dang hot and humid!

I quickly checked in to our hotel (thank you dad for your hotel points! They even gave us a room on the 31st floor!) and set off for her school. I was also so proud of myself all weekend for figuring out the NYC metro!

JT's school is a new charter school that serves grades 5-8. It's located in Brooklyn and is located on the 4th and 5th floor of this "Public School 16" Building.   As I was walking there the skies turned VERY dark and I could hear thunder and lightning coming! What was I doing outside!!!? But, I was lucky. The moment I stepped inside it started to POUR buckets. I was nice and dry though!

The school doesn't have AC either. I don't know how the teachers and students do it. And the kids wear uniforms with long sleeves and pants! I found JT and she gave me a tour of each room. They have some amazing students there! The kids are dedicated to their learning and the teachers don't take any guff. There is a lottery to get in, so if you don't want to be there, there are plenty of other students who do! They have an incredibly long school day (7:10-5 PM). Makes me think of the school I went to and how SHORT our day was compared to theirs. And, these guys don't have a gym, art room, music room, etc. I was so impressed by it all  - AND how dedicated these teachers are. They sure are earning less than many teachers, but they love, love, love their jobs!

It was also one of their fun Fridays and they were having an auction where the students could use the "merit" points they'd earned all year to bid on cool things. It was fun to watch and to see their school spirit! This was JT's first year as principal and you could tell the students and teachers love her! 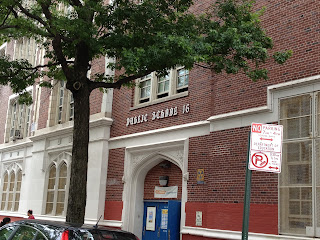 I was so glad I had the chance to visit. On my way back to the metro I glanced up and saw this sign on the other side of the road. Cool! It was such a small sign I almost passed it by! The building looked just like all the others. 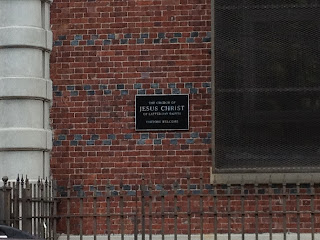 Since I had some time to kill before dinner I decided to go to Highline Park and walk it... while stopping at Chelsea Piers and a few other places. If I hadn't had a friend tell me about this I never would have known it was in NYC! It's located on the west side and it is elevated - and simply beautiful! You can see the river to the west and the city to the east. But, it's quite a romantic little stroll with gardens and benches to sit and enjoy the view. 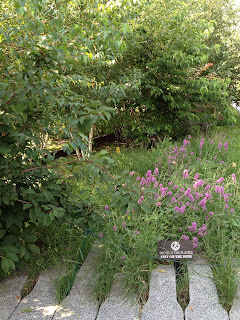 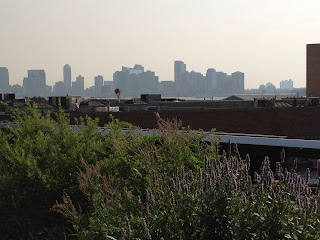 Love this view. You're in the city... but you don't feel like it!

Then, I thought this was so unusual. It's a car garage but I couldn't figure out how you rotated the cars so you could get yours when you wanted it. I must have stared at it for ten minutes to try and figure it out before just giving up! 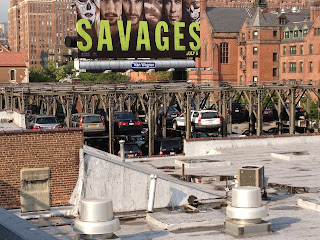 Well, since Friday was Braden's actual birthday, we met up with Sarah, and her husband, Will, at a place called Da Andrea. It was a smaller restaurant, but the food was amazing and the company was good too :) I had never met Will before (but knew his sister in Boston) and Braden hadn't either. 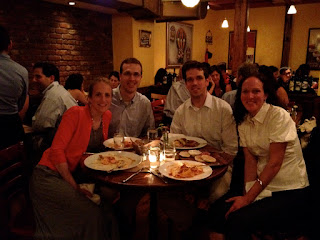 Dinner was yummy, but we had to go someplace special for dessert and to celebrate! Sarah recommended Max Brenner's and it was yummy! Everything chocolate. What else can you ask for?!

I was determined to light a candle so Braden could blow it out, but our table candle was out when we got there so I asked our neighbor if we could borrow theirs! Then, in trying to light ours, I blew theirs out as well! Luckily our waitress came to the rescue. And we could celebrate his birthday officially! 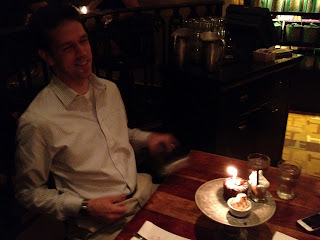 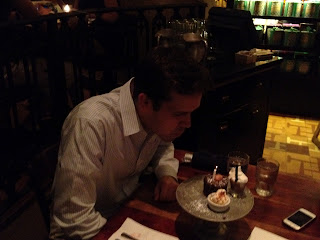 Such a fun evening!

But, I was exhausted. I found my way back to the hotel, talked to Meradyth for a few minutes (she came up later in the day) and then crashed!

Saturday was AWESOME!!
I don't usually like to run outside, but since the storms of the previous day wiped out the humidity, and because I was in NYC, I decided to go for a morning run. I left around 7:30 AM and it is the best time to go running in the city! The streets were mostly empty. The sun hadn't heated up yet and there were lots of shade to run in along the streets. It was awesome!

When I got to Central Park I didn't think I would go very far but the adrenaline just kicked in and I was loving this run! It also helped that there was a race going on in the park so I benefitted from their water stations :) I ran much further than I planned but felt great! It was so pretty in the park as well. 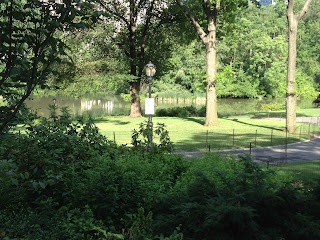 On my way out I realized that if I ran fast I could catch the end of the TODAY show out on the plaza as I headed back to my hotel! WOW. Words can't describe how excited I was when I arrived and saw I could catch the end of their tennis segment and get pictures of Lester and Savannah! I was drenched in sweat, surrounding all these nice well-dressed tourists, but I didn't care! Maybe I was even on TV!! 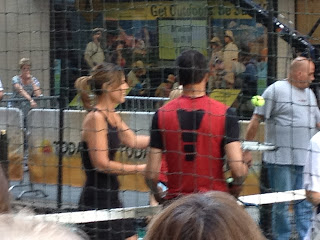 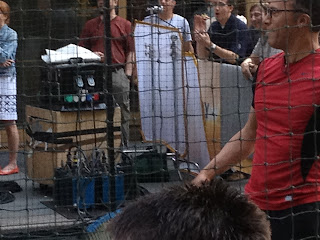 Love this face on Lester! 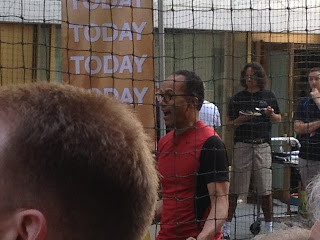 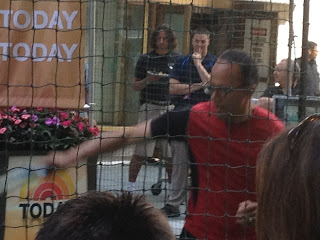 And some great action shots too! 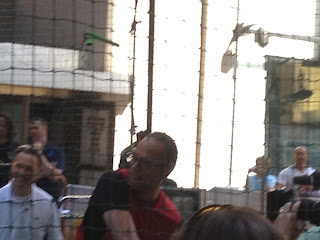 And, prepping before he says goodbye to the audience on TV 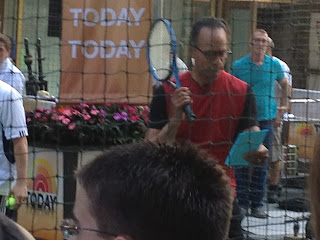 Well, on my way back I also got confused that I was in the wrong city because I saw the Philadelphia LOVE statue. Never found out why it was in NYC, but enjoyed seeing it! I got back to my hotel around 9:20. Meradyth was going to call the police if I hadn't returned by 9:30! But, I had to share all my exciting stories. If nothing else happened that day... it didn't matter. My day had been made! But, the day just continued to get better! 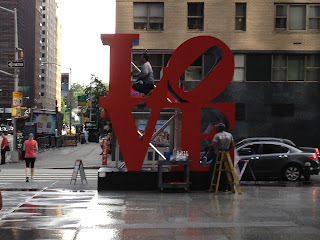