After I returned from my awesome morning run and stop by the TODAY show, I quickly got ready and Mer and I headed out for breakfast and 5th ave! Some policemen gave us a great suggestion for breakfast! It was a hidden gem and it only cost about $6. I gobbled it up and would totally go again!

We started walking up 6th Ave. and they were having a street fair. Some pretty cool things, but Mer found this picture and she HAD to get it! We had joked quite a bit about how excited we were to visit Tiffany's and had joked about the movie as well! So she bought it :) 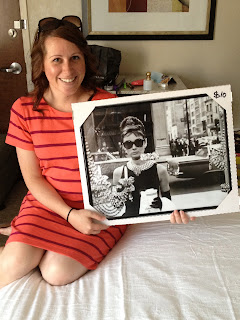 We dropped it at the hotel and then returned to the street fair (up 6th to Central Park) and then over to 5th. We took a picture by this pretty fountain at the corner of Central park and 5th ave. It was such a pretty (and NOT humid!) day 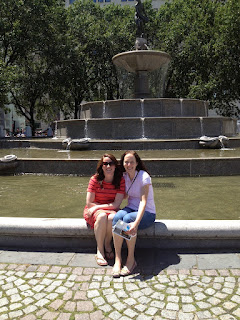 One of the places I wanted to go was FAO Schwarz and see the famous piano. Mer knew exactly where it was and I got in line like a little kid, Probably shouldn't post these crazy pictures, but I honestly had so much fun dancing on my own! 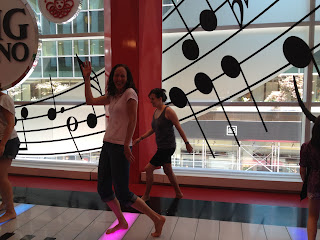 I don't know what I was doing?! Just bopping back and forth?
Dancing is NOT really my talent :) 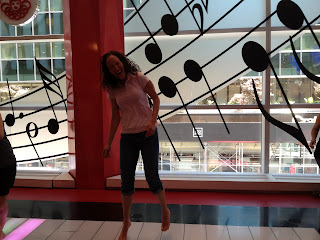 And, an official pose after I finished my performance :) 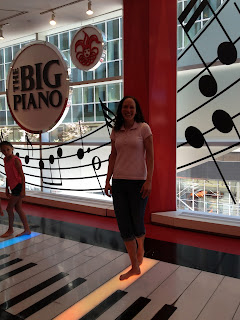 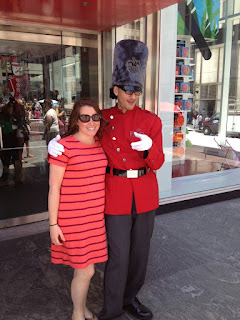 Then off to Tiffany's!
Mer knew exactly where to find the floor of engagement rings! 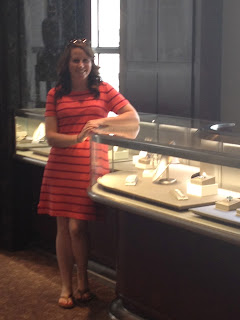 Afterwards, we set off to meet up with Braden. We had to wait for him for a bit so Mer and I sat down on a bench. WELL, as I was getting up to check out something a PIGEON decided to fly right overhead and dropped some pigeon crud right on my hand! I screamed so LOUD! I was so grossed out. Mer was laughing hard and everyone was looking at the two of us wondering what was wrong. EEWWWW. And of course, no one had a towel or soap or anything. Gross!

Well Braden showed up moments later and we walked the short distance back to his apartment so that I could wash my hand off and we all got ready to set off for our afternoon adventure!


But first we went to the top of his building and got some cool pictures!
Great view! 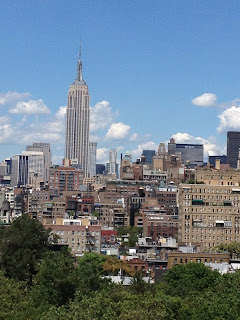 Our adventure included heading down to the financial district and then walk over the Brooklyn Bridge. Mer was hungry so we stopped for some pizza. Braden pointed out this very cool building as we walked. It's hard to tell in the picture, but it has this winding design. Not your usual square cornered building. 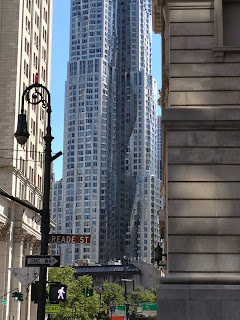 Then, up and over the bridge. There were a TON of people doing the same thing we were! But, it was very cool. 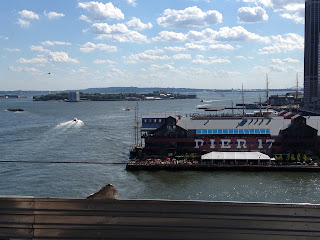 There's the Statue of Liberty! Some time I want to take the Staten Island Ferry and get a closer picture! 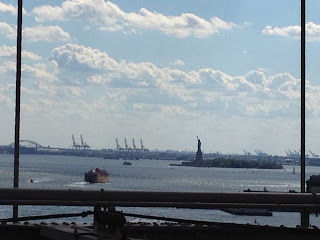 I am so glad it wasn't too hot or humid like the day before had been. If not, we would not have been able to walk everywhere we did! Probably almost 200 blocks total all day... plus my run in the morning!! 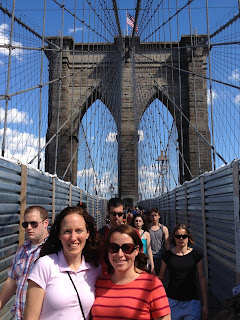 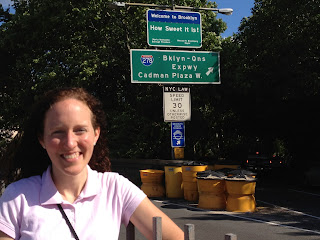 After we crossed back over the bridge, we stumbled upon this park and what else would you expect to find in it... but a blow-up Ketchup Bottle?! It was a pretty park so seeing this was a bit random. I love ketchup though so had to take a picture :) 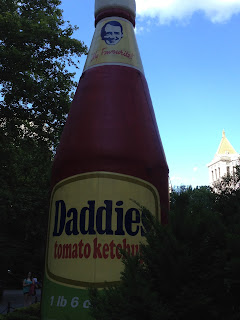 Afterwards, we all split up so we could get ready for dinner. We met up at this pretty funky, but fun, Thai place somewhere kind of near Braden's. We had a fun dinner and then set off for a Rice Pudding place Sarah had told us about the night before for dessert. Both were yummy and I had a lot of fun talking with Mer and Braden! Then, after dinner we set off for a little exploring (like we hadn't walked enough all day) but it was SUCH a pretty night we had to take advantage!

We walked to Little Italy! One thing I love about NY is the clearly defined little neighborhoods... like Little Italy, Tribeca, SoHo, Garment District, etc. Little Italy did NOT disappoint! It was such a nice evening that many restaurants had tables set up outside for dining and we just walked down the middle of it. It reminded me a lot of the North End in Boston. 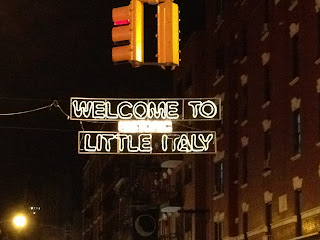 We walked past this one statue as well and I love that Mer got a picture in front of it! 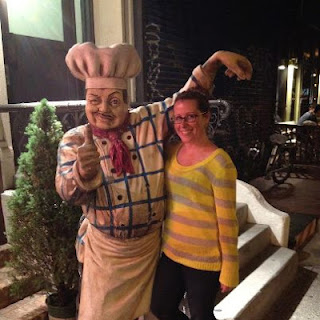 I had such a nice evening and such a fun day! On Sunday I returned to DC after church, but it was such a fun weekend. NYC had always seemed so confusing and overwhelming to me! But, after spending these two weekends in it, I grew to admire it for it's history... and charm (in a way). There's something definitely unique about it! And always great to experience it with good friends!!
Posted by Cara at 7:10 PM