RI... and then Nantucket...thus far

Summer adventures continue. For work, I left DC on July 1st to drive to RI and then to Nantucket on July 3rd. However,  2.5 hours in to my trip (just outside Philly), I realized I left my computer bag in my apartment and had to return to get it! For someone who hates to drive in the first place, this was heartbreaking! The simple mistake lead to adding 5 hours to my already 8 hour trip! ACK!

But, fortunately, traffic was in my favor. I would stop every two hours at a rest stop and run around or do jumping jacks for a few minutes and then get back in the car. My IPhone became my best friend as I talked to many people and listened to lots of music! I know that it is with the Lords help that I was able to endure... and man, what a lesson I learned on checking three times to make sure I had everything!

But, my travels did allow me to arrive in RI just as the sun was setting. I decided to stop by Watch Hill before going to my dad's house. What's an extra 5 minutes to an all ready 13 hour trip! An amazing sunset was worth it!! 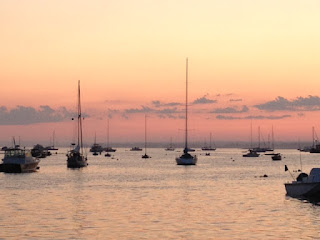 A view from the Watch Hill Yacht Club 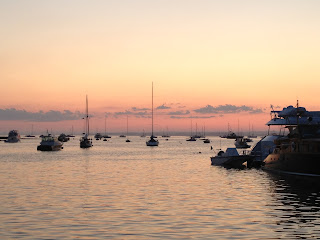 On Monday I had some dental surgery at my dad's office and basically stayed low-key all day. Caught up on sleep, blogging and reading! Tuesday morning I set off for Nantucket. Another 2.5 hours in the car followed by a 2.5 hour ferry ride. Not too bad. It was hot. Thank goodness again for AC and my IPhone!

When I got to the ferry, they told me that they had switched my ferry time to earlier that morning so I wasn't confirmed on the ferry I thought I was. OH MY WORD. I was in shock and disgusted! It's hard to get a ferry spot this time of year and you have to book well in advance. How can you just change someone's time and NOT tell them! Well, no one there could answer my question.

BUT, fortunately, by some miracle, they found a spot for me and I got on. I literally would probably have had a melt down right then and there... I was tired, sick of driving, and in pain from the surgery the day before. And, I knew I had to get the car to the island! Thank you HF for helping this work out! 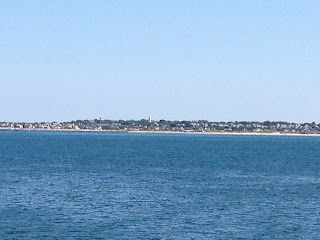 Views from the ferry as I approach Nantucket! The next day was July 4th. I hadn't been on the island for the 4th, but I knew I was in for a treat. I went for an early morning run and then set off in to town with the family for adventures! The kids love the activities on Main Street! A watermelon eating contest (Jed won first place!) Some crafty stuff, face painting, and another favorite was the DUNK TANK! 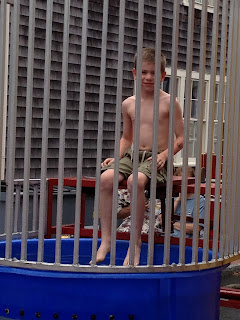 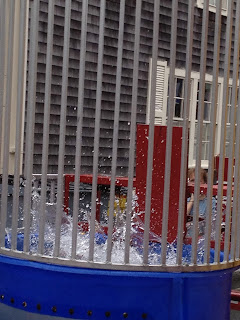 Jed's in! (I heard the water was SOOO dang cold!) 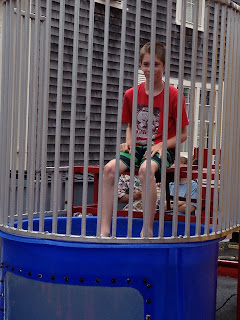 But, that didn't deter Max! 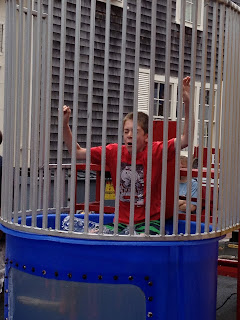 I had to wait on the sidewalk for a bit and saw these cuties walk by. A perfect July 4th outfit!! Many would be consumed later in the day... but these guys only pretended to act the part :) 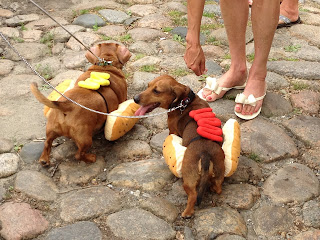 The highlight of July 4th on Main Street is the HUGE water gun fight. Seriously, the WHOLE town gets involved. I should have worn a bathing suit! But, they close main street. Everyone brings whatever water gun, water balloons or water fighting items they have in possession and gets ready for the big moment!

But, first, roll in the firetrucks! The crowd looks on and makes a pathway down the street. 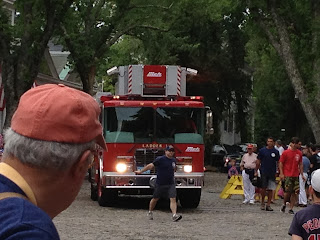 Unknowingly, I had chosen a spot right next to the firetruck. Pretty cool!

The first thing they did was put up there ladder... 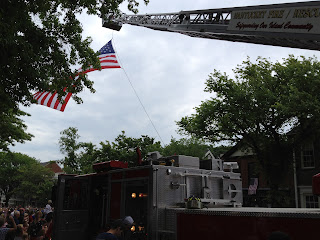 In order to fly the American Flag! 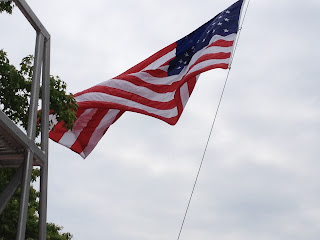 Such an amazing sight to see. I love our flag!
It stands for freedom. It stands for a nation coming together... despite differences of belief in religion and politics... but a nation that comes together in tragedy and in celebration of freedom! 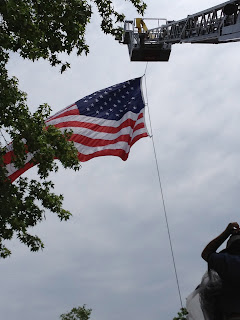 The crowd gathers in around the firetruck
and the "fight" begins!
Some more invested than others! 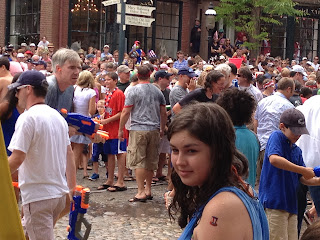 But, even in the beginning of the fight, the fireman stands
on the top and "teases" the audience with his periodic spray! 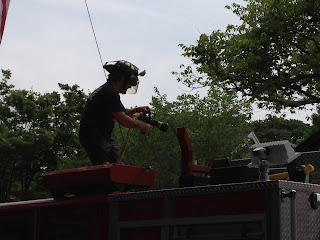 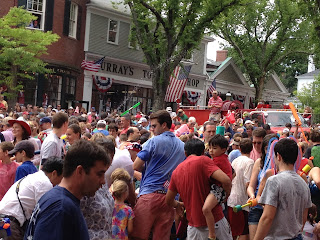 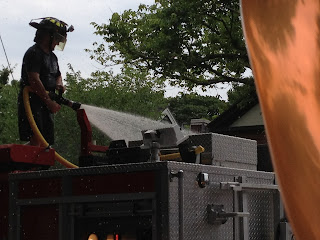 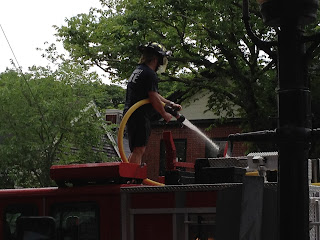 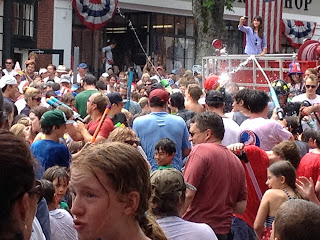 But, then the firetruck intensifies it's fight!
And, there's another truck now involved
couple of yards away!
It's fun to watch people down below try and
throw water balloons up at the fireman! 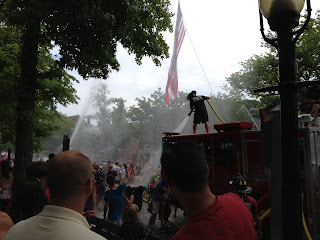 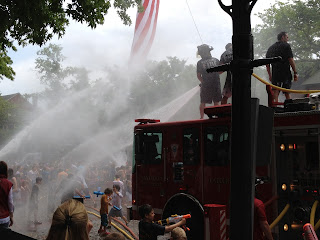 It was A-mazing! I wasn't in a bathing suit so I tired to hide under one of the awnings of the stores on main street. But, the fight went on for about 40 minutes until the firetrucks won! But, it was so much fun to see the entire island (or so it seemed) get involved and have so much fun!!

The next day I was lucky to have two friends visit me on the island (Amber and Ethan). They had been on the Cape for most of the week and ventured over to Nantucket for a day. After work, I met them at Surfside Beach. It was a beautiful day and we just sat and talked and took pictures as the sun was setting.

Amber is such a photographer! We took pictures of our feet in the sand.
I like how it turned out. 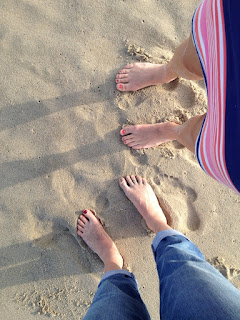 Amber had the idea to take a few poses as we sat on the beach. We were right next to a lifeguard stand and since it was late in the day we decided to make good use of it since the lifeguards had gone home! 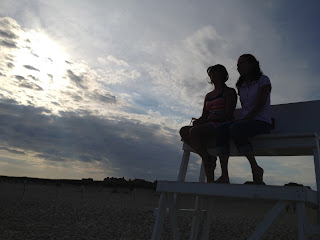 Amber taking a picture of Ethan and I as we all walked back to the car. 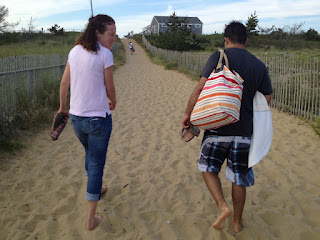 After the beach, I took Amber and Ethan on a brief tour of the island, but then I took them to the yacht club to get freshened up and we took advantage of the scene to take even more pictures! 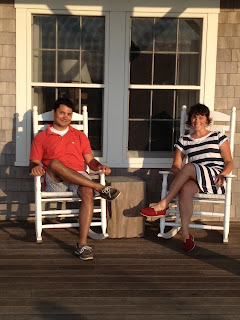 It was so much fun to have friends visit me... and it was such a beautiful day!

Life on the island thus far has been good :)