Well, in my last post I mentioned my "DC bucket list". One item on there was to see the BIG CHAIR in Anacostia. Easily done. Not in a great area, but there's not too much else to see either! Quick visit. 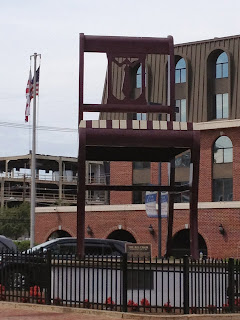 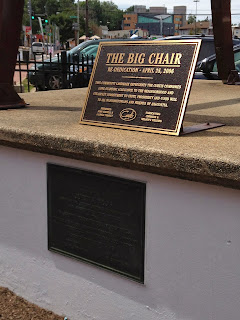 Basically, a chair (sculpture?) that is 19 1/2 foot tall replica of a Duncan Phyfe model chair was  built in 1959 as a promotional ploy. On August 23-24, 2005, the chair was pulled apart with a backhoe and removed for restoration due to rot eating away at its legs and back.  On April 25, 2006 the current owners, Curtis Properties Inc., introduced a rebuilt version,  constructed from brown-painted aluminum. 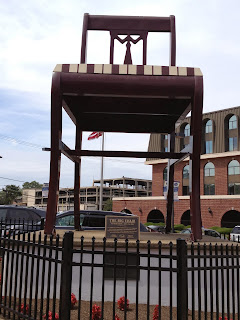 I was so excited this football season because BYU was coming to play UVA in Charlotesville! Attendance was a must since I have not been to a game since I attended BYU! It was a hot & humid day in August, but Misty, Miriam and I had a fun drive down. On our way we got stuck in some traffic.  It was fun to see a car full of BYU fans every now and then. One time, we were stopped next to a car of guys and they said something to the effect of "How come all women who are BYU fans are HOT!" Ha ha! None of us in my car complained :)

Charlottesville seems like a fun college town. We had lunch close by and then walked around the tailgating parties... but we were sweating just standing outside. It was SOO hot. We knew if we went in to the stadium and sat in our seats we would sweat even more, so we were fortunate to find a spot that had a little breeze. We then ran in to quite a few people from our stake! It was fun.

When we got to our seats, we were in the VERY top row of the stadium! But, surrounded by cool BYU fans. Game started off well. I went to find my friend Robyn and we chatted for most of a quarter. I hadn't seen her since BYU so it was so much fun to meet her husband and her kids! After that quarter it looked like a storm was coming, so I went back to my seats, but on the way there they announced everyone had to evacuate the stadium for the storm. WHAT?

Long story short... I (and many others) took shelter under the overpasses for an hour or so. I met some new people, but it was REALLY boring and uncomfortable. I also got a little wet and then started to get cold. When we were let back in to our seats, they started playing again, but then it just poured! CRAZY. At this point, I was pretty much done. Wet, cold and longest game ever. I watched on the TV monitors till the end of the 3rd quarter and then told Misty and Miriam I was going to the car. I found a trash bag and converted it to a poncho and walked to get it. Miriam and Misty stayed a bit longer, but then I drove to the stadium and picked them up. It was close, but BYU ended up loosing. Call me an undedicated fan or whatever... but I just didn't have it in me to stay till the end!

The Circus came to town!
I used to go every summer with my dad and my brothers when I was little. I loved the stunts they would do. I loved their strength. I loved seeing the animals do tricks. I loved the laughter. I loved it all!

So, when I saw I had the chance to take the little girl I work for with me to the circus, I had to do it! Just me a her. A girl date. I didn't tell her where we were going, but she was game for it!


AND SHE LOVED IT!

She's very in to gymnastics and acrobatics, but had never seen any part of a circus before. She also loved animals! When we arrived we found our seats, but one of the ushers asked us if we would like to move to the first row. HECK YES! If they had let us, we could have reached out and touched the horses and show dogs as they paraded by. Everyone was so close to us in the ring. The production was amazing. 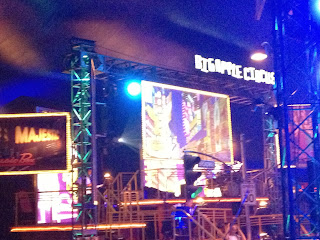 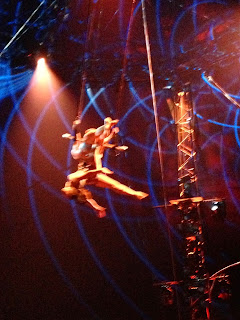 I was just so impressed the whole time thinking about their CORE muscles and how buff they are. I am endlessly working on strengthening my core!. 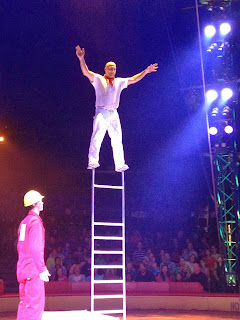 These guys were incredible! 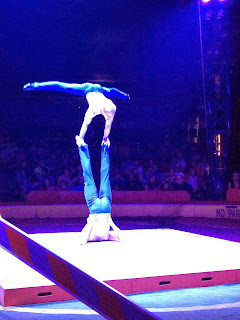 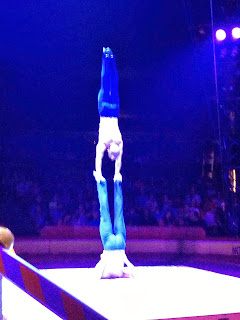 The whole thing was amazing. It's just remarkable to me what the human body is capable of doing!

There is a six part PBS documentary on the Big Apple Circus on Netflix. Really interesting about how they put the whole thing together.