I think it would be very fitting to start my new blog with a recap on one of the best plays I have seen in a long time. (Okay, so I don't go to plays all that often, but this one was REALLY good!) And, since I think all adults would secretly much rather be more child-like, this play reminded me to do that more often.

Last night I went to see "Peter Pan" at the Wheelock Family Theater in Boston and I was blown away with how good the production was. The actors/actresses enthusiasm was very catching. The best part of all was that Peter and the Darcy children REALLY flew... more than once!

I just wanted to join right in with all the dancing and singing as the Pirates and the Indians walked down the isles and brought the "play" into the audience. The music, singing and acting was fabulous. I could go on and on about it. Going to that play last night made me realize how much I miss doing things like that. I get stuck in my usual weekend night stuff... and don't take advantage of all that there is to do that's unique, fun and uplifting! So, I guess I can add that as a new resolution.

I also went with two of the best "dates" last night and they were on the edge of their seats the whole time (and they got to wear their pjs)! To see this play from their eyes and their perspective would have made it even better. Leo had to keep reminding himself that it wasn't really real or else he would have joined one of the Lost Boys right there. (Maybe I shouldn't have kept telling him that OF COURSE this is real :) And, I guess I should mention that these are not my kids... but they're a huge part of my life! more on them later...) 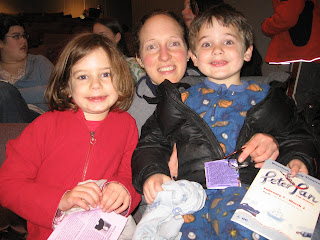 I am so impressed!! Where do you find the time - And you are so creative! Could we be related??