On Saturday, August 20th I had the awesome opportunity to walk with the family I work for, for this great cause! I have worked with children who have autism before, and figured I could surely participate in a 2 mile walk for a good cause. It's been a while though since I have been around families who have children with autism and how it affects every family member. I met the founders that morning and walked with their children and grandchildren. I saw, in that short amount of time, how autism not only affects the child, but every member of the family. It affects every minute of their day and what they are able to do and accomplish. The parents that I know of who have a child with autism dedicate their lives to helping their child. And, as I learned more about this organization, met the founders and their family, and participated in the day's events, I have truly become a supporter of it and am volunteering to help at their DC walk in October! What they have been able to accomplish in 6 years is incredible!

Here is a link to their history:
AUTISM SPEAKS 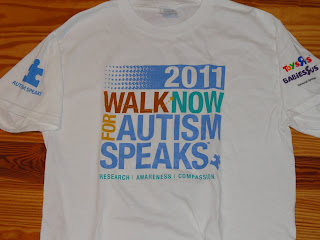 I also really liked the design of their t-shirts.
I'll actually wear this one again!

The day of the walk was absolutely beautiful. We've had many days like that here on the island, actually! But, it was sunny and not humid. We gathered on Jetties Beach, which is near town. They had some activities for kids, and then some promotional stuff, and then we walked 2 miles! It wasn't hard, but they were able to raise a lot of money.

Autism is hard because there really isn't any medicine for it, and a lot of the cause/ways to help are "unknown". Today, it is estimated that one in every 110 children are diagnosed on the autism spectrum, which makes it more common that childhood cancer, juvenile diabetes and pediatric AIDS combined. Sadly there are about 1.5 million individuals in the US with it and the prevalence rate is increasing about 10-17 percent annually. So, something needs to be done!

After the walk, we stopped back at the house to get out bathing suits... because we were invited to a pool party/BBQ at the Wright's house! They live on the north-eastern side of the island in a very pretty area. The house was beautiful, as well as the pool/pool house and everything around it! They also have a lot of land, which is great for their grandkids! 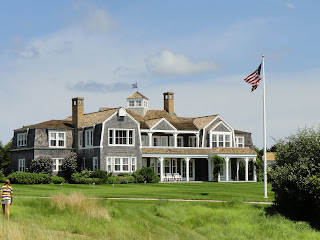 This is a picture of their beautiful house!

The BBQ and all the food were by the pool. So, while the adults talked, the kids played! They even had their own paddleboard! Notice below... Jed is very happy to be on it, but that's only because he fought off Max to get that spot and Ava is very distraught because she had it first. Ahhh... siblings :) 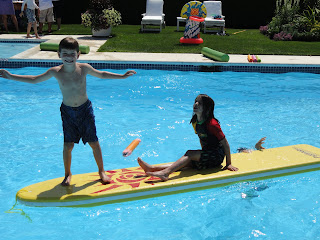 I wasn't sure the whole story behind this racecar, but I do know it was quite a feat for it to be able to get on the island. It had to come over on the ferry and was very protected... but I imagine it took a lot of coordination and planning. This was my first time seeing an actual racecar up close and personal. Very cool! I even looked under the car and I can't tell you all that they told me, but the engine and the mechanics underneath the car are not like a typical car! 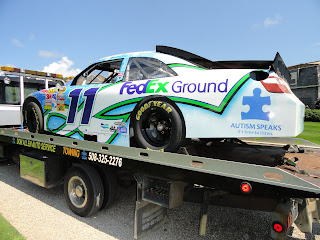 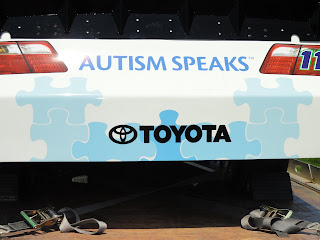 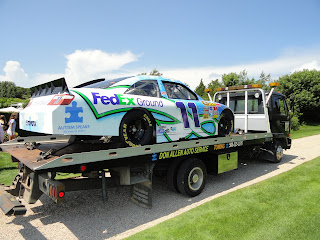 Well, after the party (with very yummy food), I headed back to Jetties Beach where I saw the final products of the Sandcastle Building contest they had that afternoon. People could register as family's, individuals or groups. Sadly, when I was arriving, some of the high tide was coming in and starting to destroy some of the castles, but I still snagged some pictures! Some people get very in to this ad plan for months what they are going to do! 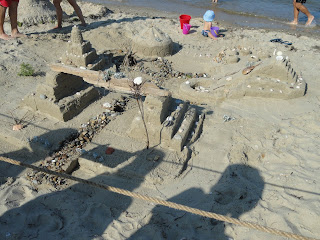 I thought this one was pretty neat. It's just a huge castle, but very well done and I liked the extra special touch of the shells! "ACKPORT" is supposed to resemble the airport whose call letters are ACK. The sculpture is a plne and then they also used shells to decorate it. Creative! 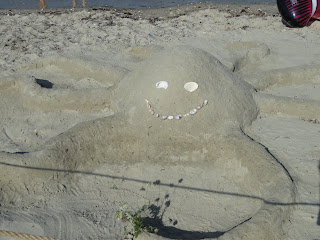 And, a lovely Octopus. Simple, but cool!

Just another hard-working day here on the island :)