And, again, another hard day of work!

You would think on the island there would be quite a few people who offer to take you tubing or water-skiing, etc. Well, there aren't. We couldn't find any, until just recently! Their dad saw a flyer for a guy that would take us out on his boat for tubing and he signed us up!

It could not have been a more beautiful day! We met Captain John who took us out on his boat in to the harbor. He blew up the massive 3 person tube and off we went! I was one of the first to get to go. It was a tough sacrifice, but someone had to do it! Ava and Jed obviously loved it as well :) 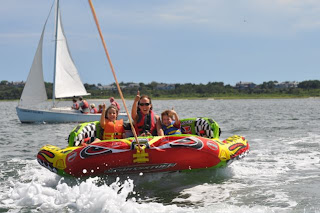 The thumbs up in the picture just meant that we wanted him to go FASTER! For Ava, he could never go fast enough :)

So, some other tough things I've had to do is try paddle boarding! I don't think I had ever seen anyone do this before this summer, but couldn't let the summer go by without trying it. Sadly, I chose a day that was pretty windy... meaning that it was easy to get somewhere when the wind was behind you, but coming back was a LOT harder. This kind of scared me because I didn't want to have to swim back in with the paddleboat, so I didn't venture too far out.

I asked Amanda (my only friend on the island!) to come with me! She's always got an "adventure bug" in her, so she readily agreed! 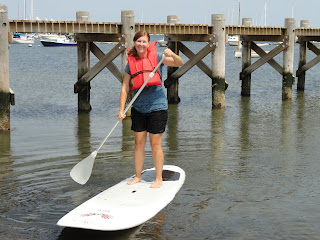 Paddleboarding is weird in that you just stand on this board and paddle. Your feet are not strapped to anything and so you really have to balance yourself. Good for the core muscles, I guess! 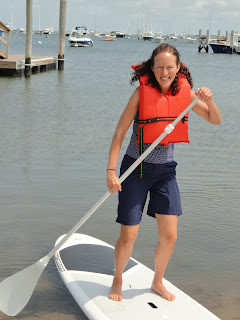 Since we didn't venture too far out with the paddlesboards, we decided that we could get further if we went together in a kayak. So, Amanda and I took out a double and paddled over to the other side. There wasn't anyone to take a picture of both of us in the kayak so we each got one separately. It was hard paddleing back in... the wind was really strong that day! 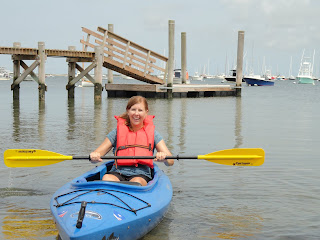 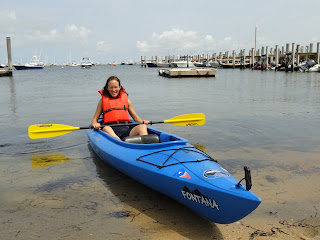 Yep - Just chillin'. But that was after using all my upperbody strength to help get us back. And, I owe my steering skills to Camp Oneka where I learned to canoe and kayak! If not, maybe we would have ended up outside the harbor and in the ocean!!

Cara you look so cool on your paddle board! I have always wanted to try that :)