Something I never thought I would see on this island

Pretty flowers, beaches, houses, pools, yacht clubs, stores, landscape, etc.. You name it, it's beautiful! Everything is ridiculously expensive because they know that the majority of the people on the island can afford those prices, or work for those that can... like me :)

Well, I was shocked that the island was going to have its annual demolition derby! This was a tradition... WHAT?! The island has a different side to it than I have ever seen! So, I had to check it out. I got made fun of a little by some of those I talked to before I went (as I was leaving a tennis tournament at a club in order to go). They were just joking around, but I knew it wasn't their scene. I consider myself someone who can kind of mix well with all people, so I hoped I didn't stick out like a sore thumb there!

Off I went. I just wanted to take pictures of everything. I think I've been to one before, but it was when I was at BYU and I don't really remember it. 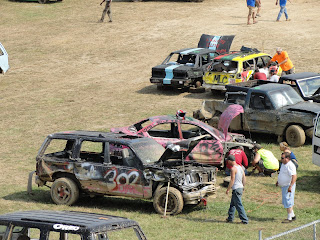 I went the 2nd day. So, maybe some cars had already been removed, but there were still a ton on the lot. People were fixing things and trying to make their car the best. I loved some of the colors on the cars and thought about how I would decorate one if I had it! 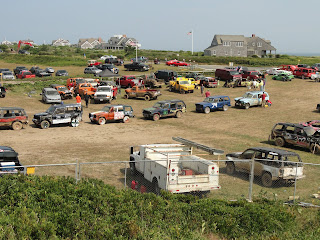 These cars were lined up ready for the next event

There was also a certain style of dress among most of those that attended... and I can't say that I really fit in well there, but they were accepting :) I made friends with the three older gentleman who sat beside me. I enjoyed listening to their conversations, and then I felt comfortable to ask them what the heck was going on and what the rules were. 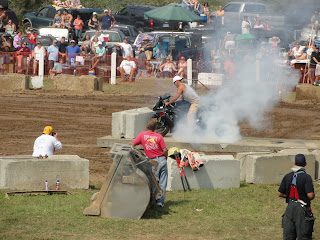 This event was very confusing for me. I think they called it "intermission". But, the motorcycle would come up against the huge cement stone in front of it and then just rev its' tires trying to create as much smoke as possible. The more smoke that came out, the more the crowd cheered! 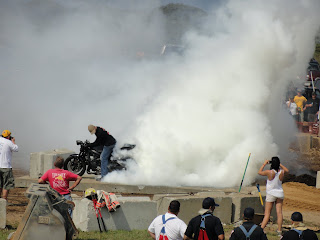 So, this guy got some really, really big cheers! 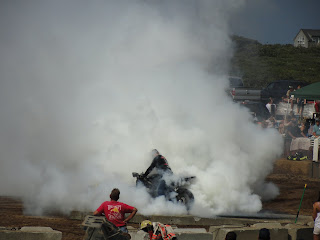 And, so did he.
I was just glad I was far back enough
that I didn't have to inhale the smoke! 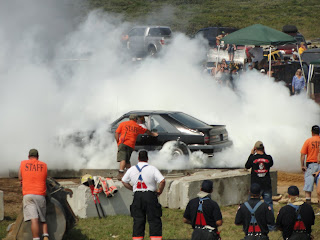 Then, it was on to the cars.
What is the guy in this picture thinking?
Why would you stand there and hold it??? 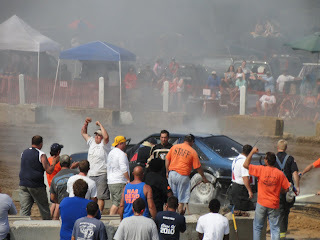 So, in this picture the car had just caught on fire and the driver escaped before he got injured. The FD was quick to respond, but the day before someone had to be med-vacced to Boston because he didn't escape in time and had burns on most of his body. I think it's interesting that the guy in the white shirt is pumping up his hands in victory! To me, the entire thing is silly and dare I say, stupid!

I then watched the cars ram in to each other and have a free-for-all. Needless to say, I was ready to go after one round. But, hey. I learned that Nantucket has a side I've never seen before and that I shouldn't judge by the appearance of the island only :)